Marriage in Decline: No Big Deal? 3 Reasons Yglesias is Wrong

Last week, Matthew Yglesias argued in Vox that the “decline” of marriage in America, and around the globe, “isn’t a problem.” His argument went like this: Poverty is low in lots of developed countries with low marriage rates; American children are doing better by a lot of measures, including high school graduation rates, than they were forty years ago, when marriage as an institution was stronger; and—heck—the quality of American marriages is up even if the quantity of American marriages is down. The time has come for conservatives like me to stop playing Chicken Little and accept that the sky isn’t falling, even though marriage is less likely to ground and guide the lives of men, women, and children in 2015 than it was in 1975. Shorter Yglesias: marriage is declining and it’s no big deal, right?

Wrong. Put aside, for a moment, that Yglesias seems to have ignored the obvious counter-factual scenario to the rosy portraits he painted in his article. Yes, it’s true that we’re richer, better-educated, and safer today—on average—than we were in 1975, when marriage was stronger. But imagine how much richer our families would be, how much better educated our kids would be, and how much safer our streets would be if we had simply managed to keep marriage rates at 1975 levels. Now that would be one rosy scenario. Put aside, also, that he seems unaware of the fact that some child outcomes—such as the emotional well-being, social ties, and health of children, as documented by Duke’s Child and Youth Well-Being Index—have declined since 1975.

The bigger weakness with Yglesias’ argument is that he doesn’t seem to have the foggiest recognition of one of marriage’s core social functions: attaching men to the children they help to bring into this world. Across time and space, as the noted anthropologist Bronisław Malinowski observed, the rituals, customs, and norms associated with marriage have generally increased the odds that men will invest financially, practically, and emotionally in the lives of their children. Indeed, that’s never been more true than in America in 2015. To paraphrase Richard Reeves at the Brookings Institution, the world may never have seen so many “high-investment parent” (HIP) fathers as the married American dads who can be found reading to their toddlers most weeknights, coaching their son’s soccer team on Saturday morning, and leaving work early on a Friday afternoon to catch their daughter’s performance in the school play.

But because of the decline of marriage, fewer and fewer men have the opportunity to be this kind of father in America, and that matters for them, their kids, and the families that they failed to form or sustain. Men who aren’t married to the mother of their children are much less likely to invest financially, practically, and emotionally in those children’s lives. That’s because families formed outside of marriage (or split by divorce) typically end with the kids living with mom, while dad’s day-to-day involvement declines. 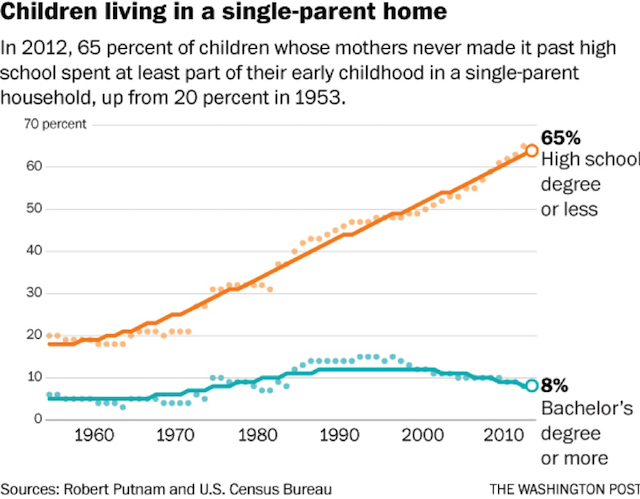 From "The terrible loneliness of growing up poor in Robert Putnam’s America," Emily Badger, Washington Post.

What’s more: because the decline of marriage is concentrated in working-class and poor communities, as the figure above indicates, these disconnected dads are most likely to be found in the very communities that can least afford to support lots of single-mother headed households. By contrast, the vast majority of college-educated parents manage to get and stay married. The decline of marriage thus ends up being a major contributor to economic inequality, gender inequality, and social inequality. How does that work?

No Honey, No Money for Junior

When a man is not married to the mother of his children, both the mother and those children are much less likely to see his money, and to enjoy the economies of scale that come from two parents sharing a household. Yglesias admitted as much in his Vox article, but he did not consider the broader economic implications of the growing class divide in marriage and family instability: namely, rising levels of single parenthood in poor and working-class communities, coupled with high levels of marital stability among more educated and affluent communities, necessarily translate into greater economic inequality between these two groups.

Urban Institute economist Robert Lerman and I estimate in For Richer, For Poorer: How Family Structures Economic Success in America that almost one-third of the growth in family income inequality since the 1970s can be connected to this decline in marriage. We also discovered that the stagnation in family income over this same period is mainly a phenomenon among unmarried families, not married families; that’s partly because these families are less likely to include a male breadwinner. In fact, “the growth in median income of families with children would be 44 percent higher if the United States enjoyed 1980 levels of married parenthood today.” The decline of marriage is not the only story here, of course: declining real wages for men without college degrees are also a major part of our growing economic divide. But one reason why so many poor and working-class families are floundering in the twenty-first-century economy is that the fathers aren’t there to turn over their paychecks to the mothers.

The retreat from marriage also fuels two kinds of gender inequality that rarely get airtime in the mainstream media. First, working-class and poor mothers end up carrying a much bigger share of the load associated with raising children than do (absent) fathers: The parent who lives with the children, in most cases the mother, is predictably going to do most of the day-to-day household and child care chores.

Second, boys from working-class and poor communities struggle more than their female peers to navigate life without the steady involvement of their fathers. In Wayward Sons: The Emerging Gender Gap in Labor Markets and Education, the MIT economists David Autor and Melanie Wasserman suggest that the “increased prevalence of single-headed households and the diminished child-rearing role played by stable male parents may serve to reinforce the emerging gender gaps in education and labor force participation by negatively affecting male children in particular.” By their account, that’s because lacking a father seems to hurt boys’ performance and behavior at school more than girls’, and boys may also be less likely to imagine a future tied to work and family life because their own father is not in the picture. By contrast, girls being raised by a single mother anticipate having and supporting children as adults with or without a man.

Although boys are more likely than girls to behave poorly at school regardless of their family background, Autor and Wasserman note that the gender gap in school suspensions and other problems is “substantially greater for children reared in single mother-headed households than in households with two biological parents.” They also point out that gender gaps in college completion and college aspirations—areas in which young women outstrip young men—are larger for those from less-educated families, as the figure below indicates. One potential reason: young men in less-educated homes are less likely than their better-educated peers to have a father encouraging them to attend (and helping to foot the bill for) college. 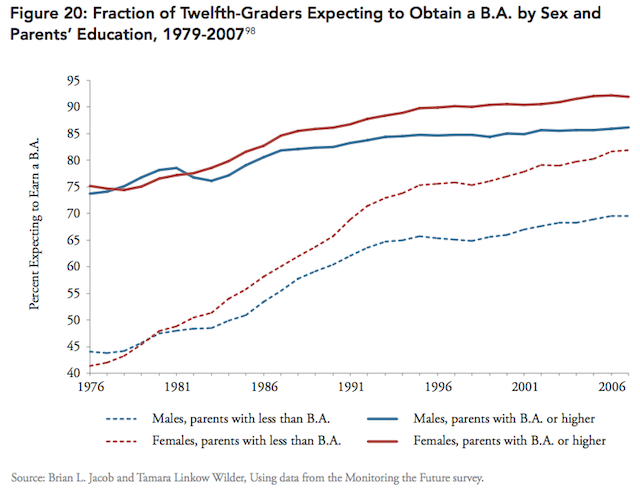 From "Wayward Sons: The Emerging Gender Gap in Labor Markets and Education," by David Autor and Melanie Wasserman, Third Way, 2013.

As Autor and Wasserman conclude, boys “born into low-income, single-parent headed households—which, in the vast majority of cases, are female-headed households—appear to fare particularly poorly on numerous social and educational outcomes.”

The replacement of the institutional model of marriage—its role in guiding and grounding adult relationships in law and culture—with a soul-mate model of marriage, focusing more on fulfillment and less on obligations to spouse and children, was supposed to make marriages happier, precisely because it has made marriage more optional and more egalitarian. This is a view articulated by many progressives, such as the historian Stephanie Coontz and the economists Betsey Stevenson and Justin Wolfers, and echoed by Yglesias in his Vox article. Yglesias put it this way: “As women have become more empowered, they have gotten pickier. That means more single women, and a higher quality of relationship for the non-single.” There’s only one problem with the argument: it’s not true. 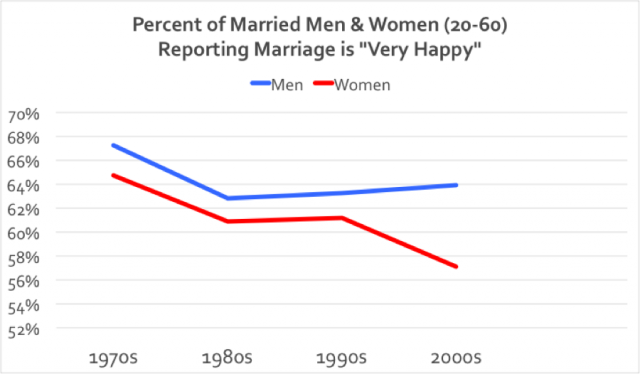 Overall, marital happiness has declined since the divorce revolution. In the 1970s, about 66 percent of husbands and wives were very happy, whereas in the 2000s only about 60 percent were, despite the fact that a lower share of Americans were getting and staying married.

It wasn’t supposed to be this way. The progressive argument, articulated by Coontz in her book Marriage, A History, was that as marriage became less obligatory starting in the 1970s, as divorce rates rose and marriage rates fell, and as women increasingly came to expect high-quality and egalitarian partnerships, only the best relationships would lead to lasting marriages. In Coontz’s estimation, marriage would become “more joyful, more loving, and more satisfying” in a world where the institution of marriage had a weaker hold over the lives of individuals. 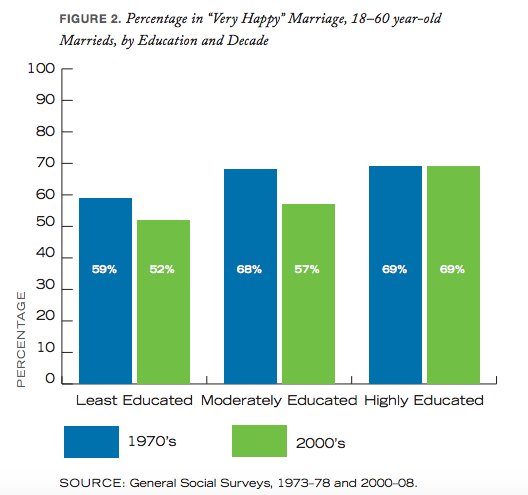 From "When Marriage Disappears: The Retreat from Marriage in Middle America," National Marriage Project and the Institute for American Values, 2010.

But it hasn’t worked out that way. Not only has marital quality declined, on average, but we’re also seeing a growing class-based divide in marital quality as the soul-mate model of marriage gains ground. Well-educated Americans who have the financial means and the social skills to navigate today’s “more optional and more brittle” soul-mate marriage model (in Coontz’s phrase) continue to enjoy high-quality marriages, but less-educated Americans are markedly less happy than they used to be, as the figure above indicates. We can debate why this divide has opened up. Liberals will stress the economic difficulties facing working-class couples; conservatives will stress the ways in which the divorce revolution hit working-class communities especially hard, undercutting young people’s faith in marriage and their willingness to invest financially, practically, and emotionally in it. But it’s simply not the case, as Yglesias argued, that “marriage is getting better.”

These are but a few of the reasons why the nation’s retreat from marriage is a big deal. Curious readers can consult Robert Putnam’s new book, Our Kids: The American Dream in Crisis, to see a thoughtful liberal offer other reasons to be concerned about the impact on children of the dramatic decline of marriage in poor and working-class communities across the nation. But the bottom line is this: the decline of marriage is a problem because it is one of the primary reasons that the richer and poorer classes in our country are increasingly separate and unequal.