Living the Dream: Married Americans More Likely to Be Living the American Dream

by Samuel J. Abrams, @SamuelAbramsAEI
Back to Blog

The nature and composition of households has changed dramatically in the United States over the past few decades. For generations, Americans seemingly aspired to marry and have children, whereas today stories about living alone dominate the news. In fact, the Census Bureau found in 2019 that 35.7 million Americans live alone, over a quarter (28%) of households, and this is sharply up from 13% of households in 1960 and 23% in 1980. There are many possible explanations for the rise of solo living, including longer life expectancy and improvements in health and quality of life, delayed or forgone marriage, urbanization, changes in socialization and technological means of communication, and wealth and costs of living. But what is often overlooked in these stories about solo living are the many Americans who are married and the powerful communal benefits of households who marry and have children. Thanks to a new national poll of 1,400 Americans sponsored by the Los Angeles Times and Reality Check Insights and fielded after the November 2020 elections, we can see just how important traditional institutions of marriage and children are in shaping one’s outlook of the American Dream and one’s community. 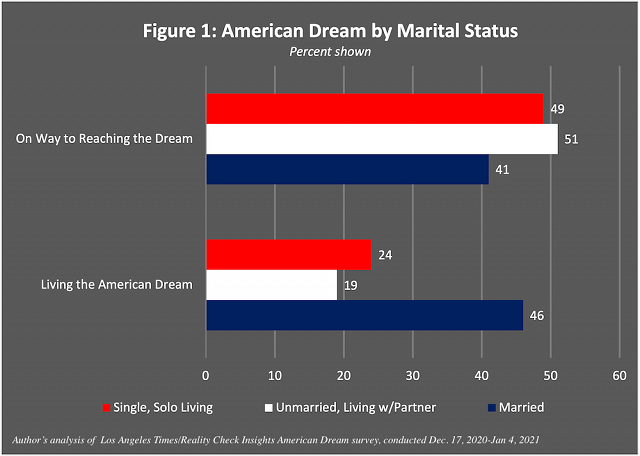 Adding children under the age of 18 into the mix, the picture of the American Dream is muddied a bit but does not change the overall views of married Americans on the topic. Married Americans with children under 18 living at home are notably less likely to state that they are living the Dream compared to those who do not have children at home.

Children are unquestionably part of the glue that unites and anchors America’s neighborhoods.

Although children do not appear to impact married individuals’ views of realizing the American Dream, there are a number of additional noteworthy findings in the data about the impact of children vis-à-vis the American Dream. The survey asked if certain milestones or goals are essential to realizing the Dream and about the importance of community involvement. When asked about the import of making meaningful and valuable contributions to one’s community, 46% of married Americans with children rate this as essential, a figure that drops 10 points to 37% among married couples without children. Moreover, when asked about is it essential to create a better life today than one’s parents, 44% of those married with children stated that this was a goal, presumably for their children’s benefit, compared to 29% who do not have children.

Going further, when thinking about one’s local neighborhood and what is essential for community, having children places a clear focus on public amenities. For example, 57% of married families with children think that it is essential to have parks and community recreational facilities nearby, compared to just 42% of couples without children. The same thrust can be found with respect to the importance of good schools: almost three-quarters of families with children compared to two-thirds of those without. This is important because good schools and public amenities anchor communities, increase cooperation and social capital, and often promote more engaged and civically minded places. Having children clearly plays a strong role in helping motivate parents to choose and support places with critical civic infrastructure.

In short, marriage drives perceptions of the American Dream, but having children at home also has an impact on America’s social fabric because children help create community. While children themselves do not impact the overall perception of realizing the American Dream, parents think about the value of neighborhoods and their roles in the community at higher rates than those who do not have children at home. Moreover, couples with children seek out spaces that have amenities for families and these amenities, in turn, help create stronger social capital and relationships locally. Children are unquestionably part of the glue that unites and anchors America’s neighborhoods. As plans begin to circulate in Congress to shore up families with children, such as Sen Romney’s child capital investment plan, along with alternatives from the White House, the nation would be well served by really investing in families and children as one way to help rebuild and strengthen our local communities.

Samuel J. Abrams is professor of politics at Sarah Lawrence College and a visiting scholar at the American Enterprise Institute.