Writing for the Atlantic in 2019, Kate Julian introduced America to the brave new world of the sex recession. Young people are having a lot less sex, Julian observed, for a variety of reasons. Julian’s essay drew from a passel of recent academic papers, with two articles by psychologist (and frequent IFS contributor) Jean Twenge especially relevant. Twenge and her colleagues showed that the decline in youthful sex is rooted in birth cohort rather than historical period. In other words, young adults are primarily having less sex because of how they grew up, not because of the state of the world when it comes time for them to be sexually active. Nonetheless, a paper by sociologists Scott South and Lei Lei showed that current conditions still make a difference, most notably lower rates of relationship formation and alcohol consumption (video games and low earnings play smaller roles).

The sex recession isn’t limited to young people. In another paper, Twenge and her colleagues showed that American adults of all ages are averaging fewer trysts a year. About two-thirds of this decline is attributable to the waning probability of being married or cohabiting. The other third is a decline in how often married couples get it on, a downturn with few apparent causes. It cannot be explained by hours spent at work or pornography consumption, as I wrote for IFS in 2017.

Much of this research has been based on the General Social Survey (GSS). Although the GSS sex data are reliable, they’re also relatively limited. Respondents are only asked if they’ve been celibate for the past year or since age eighteen. Relatively few people fall into the latter category, so the ensuing sample sizes are small. Furthermore, the GSS never defines sex, so non-coital encounters may not be included. Finally, its data on same-sex encounters are limited.

A data set that overcomes these limitations is the National Center for Health Statistics’s National Survey of Family Growth (NSFG), a repeated cross-sectional survey of about 9,000 adults ages 15 to 50. The NSFG contains detailed measures of respondent sexual history that include all sexual encounters, both same-sex and opposite-sex. Its biggest drawback is that the data for men are somewhat more narrow, measuring lifetime celibacy or celibacy in the past year, but not anything in between.

Although Jean Twenge and her colleagues suggest that the sex depression is a product of birth cohort, journalist Charles Lehman and others have noted a secular trend towards celibacy based on the GSS. What does the NSFG say? 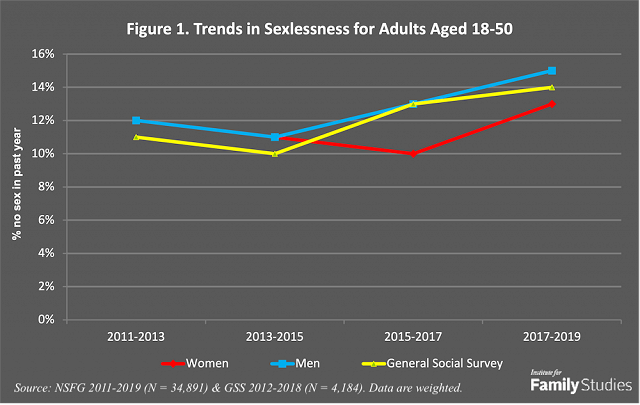 The same holds true if the data are limited to young adults ages 18-29, as Lehman did (see Figure 2). 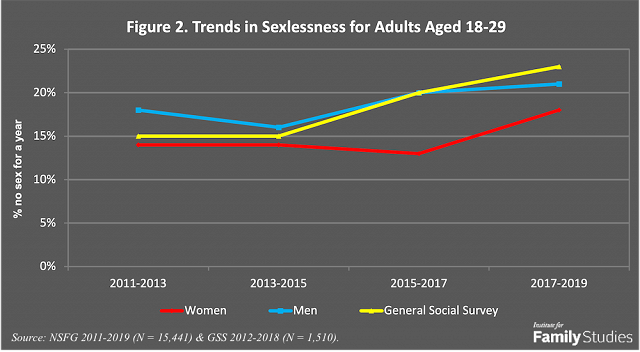 What about celibacy that lasts longer than a year? Figure 3 shows there’s little evidence of a trend for female NSFG respondents in the likelihood of either two or five years of celibacy.3 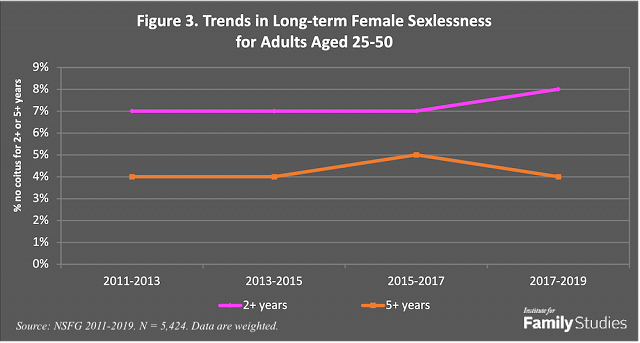 Although married couples may be spending less time between the sheets, long-term celibacy remains extremely uncommon for people in live-in relationships: Less than 1% of heterosexual married or cohabiting NSFG respondents reports no sex in the past year. Trends in sexlessness are therefore driven by two phenomena: changing rates of union formation, and the sexual (in)activity of people who don’t live with a partner.

Are fewer people in live-in relationships in recent years? The NSFG suggests the number is declining (Figure 4), but at this point we run into a surprising limitation of the data. While the NSFG data on sexual behavior are detailed, marriage and cohabitation are only identified for opposite-sex unions (in other words, respondents married to or living with a same-sex partner are treated as single and unmarried). This lacuna in the NSFG presumably helps explain the observed decline in live-in relationships observed in Figure 4: in the wake of Obergefell v. Hodges (2015) and the nationwide advent of marriage equality, nearly a million households in America are headed by same-sex couples. Take these households out of the equation, and the evidence for a downward trend in coupling becomes less convincing. Perhaps this is why the GSS offers weaker evidence of a downward trend in the prevalence of live-in unions. 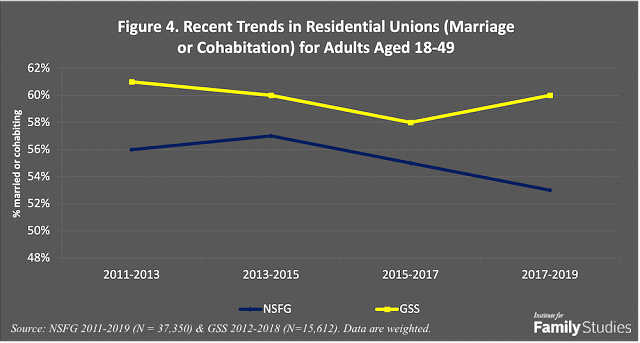 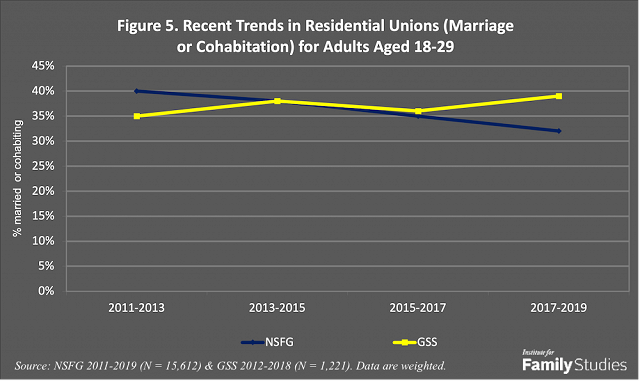 For this reason, it’s more likely that the sex drought centers on people who aren’t married or cohabiting.4 But the data are equivocal. Figure 6 shows the chances of being sexless for a year or more for single adults ages 18-49.  The statistics for female NSFG respondents track almost perfectly with the GSS data and suggests a mild uptick in the chances of celibacy, but the data for NSFG men don’t show much of a trend one way or the other. 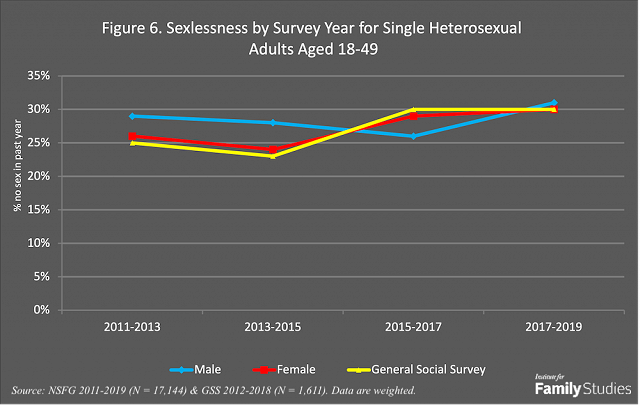 The story is similar for young adults ages 18-29 in Figure 7, although this time it’s the NSFG men who hew more closely to the General Social Survey respondents. Overall, the NSFG data show less evidence of a trend towards celibacy than the GSS. All that can reasonably be concluded is that 2018 seemed like a bad year for sex in America. 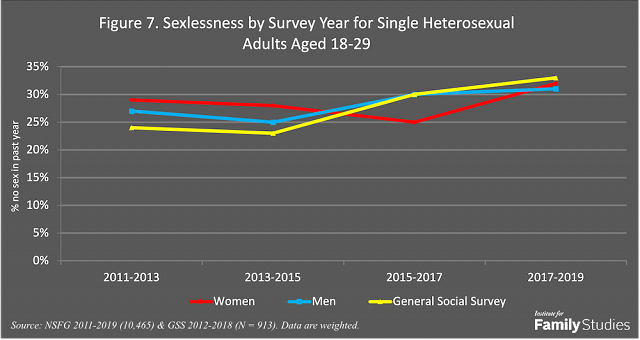 This assessment also holds when we consider trends in long-term celibacy for single women (Figure 8). The jump from 2015-2017 to 2017-2019 in the number of women who’ve been sexless for two years—from 20% to 25%—is eye-catching, but there isn’t any reason to suspect (or not suspect) that this is part of a trend. But to focus on this question is to lose sight of the bigger picture: one out of four single American women hasn’t had a sex partner for two or more years, while over one in ten hasn’t had a partner for five or more years. Furthermore, for some of these women there’s every indication that sexlessness may be a permanent state of affairs: the NSFG shows that one out of 20 single female non-virgins over the age of 25 hasn’t had sex in 10 or more years. 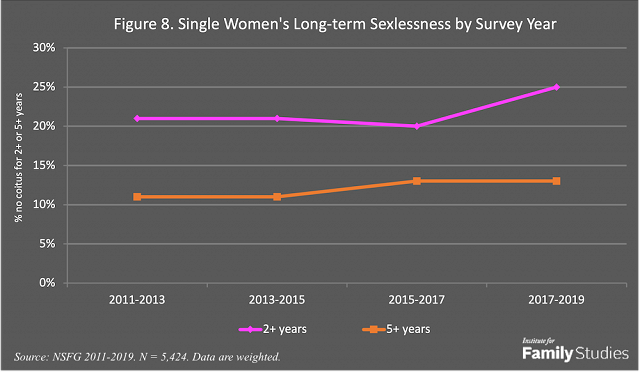 There isn’t really good evidence that the number of celibate adults under the age of 50 has steadily grown over the past 10 years. Rates of sexlessness are highest in the most recent waves of both NSFG and the GSS, but there’s no way of knowing whether this is merely a blip, or a sign of things to come.

That doesn’t detract from the fact almost 30% of single respondents of either survey report not having sex for the past year. Since sex is almost always a precursor to a long-term relationship, this means that a meaningfully large minority isn’t even in the ballpark of finding a partner. Meanwhile, about one in seven never-married adults do not aspire to marriage. Some portion of these marriage-eschewers is probably missing out on the potential for a fulfilling sexual relationship outside the bounds of matrimony—and perhaps even a relationship that might ultimately change their minds about marriage.

These trends here have other implications for human well-being. Most people want to be married; an even larger majority aspires to some sort of intimate relationship. Furthermore, Americans are having fewer children than they’d like. Even when sex doesn’t lead directly to children—most obviously, for same-sex couples—it may advance a relationship that will eventually result in childbirth or adoption. On the plus side of the ledger, few people will dispute the benefits of fewer unwanted pregnancies—a subset of unintended pregnancies—and fewer teen pregnancies.

More broadly, the Sex Recession tells us something about modern life. We’ve been bowling alone for decades now, withdrawing from various social institutions. Perhaps withdrawal from sex is the logical next step? Some Americans have somehow sublimated, submerged, or substituted their innately human desire for sex in lives increasingly lived online, in social media, and in video games. This trend has only gathered speed in the isolation imposed by the Coronavirus pandemic (and early indications are less than encouraging). What will happen when we emerge, perhaps blinking and unsteady on our feet, from our annus horribilis of isolation? Will there be an uptick in sex, or will we just have gotten out of the habit?

3. Analyses of female long-term celibacy omit respondents under the age of 25. Long-term sexlessness for younger women might include years of youthful virginity.

4. These data are limited to heterosexual and hetero-leaning bisexual adults—per the definition in Footnote 1—given the inability to measure marriage and cohabitation for gay and lesbian respondents.