The popular takes on marriage in the time of COVID-19 run all over the map. COVID is straining American families. No, maybe it’s making them stronger. Divorce rates in America are soaring, says the Daily Mail, while The New York Post says, no, divorce rates are falling.

Finally, thanks in part to a major new survey of American family life, we have enough data to venture an early assessment of how marriage has actually faired during the pandemic, and we have both good and bad news to report.

Couples Are Stressed Out. Married couples have been hit hard by a pandemic that has tanked the economy, thrown millions of men and women out of work, forced families into lockdowns, and taken the lives of hundreds of thousands. One indication is a large minority of married Americans report that COVID has increased the stress in their marriage. This is abundantly clear in the first major survey of family dynamics since the pandemic began, the American Family Survey (AFS), a recent nationally representative survey of 3,000 Americans sponsored by the Deseret News and Center for the Study of Elections and Democracy in connection with YouGov. Among adults ages 18 to 55, the group we focus upon for this article, the AFS finds that 34% of married men and women report that the pandemic has increased stress in their marriage. 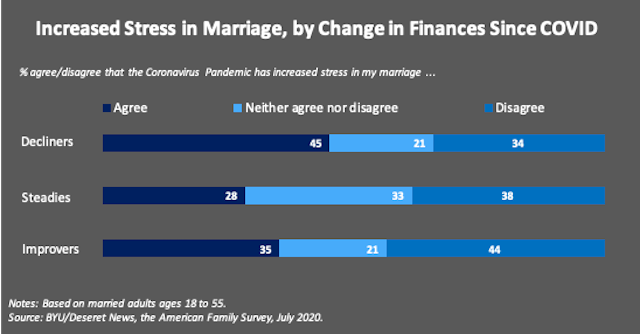 Not surprisingly, reports of stress are highest among those who suffered the most financially from COVID, a group of husbands and wives disproportionately made up of poor and working-class couples. Breaking respondents into those whose financial situation has gotten worse since March (“decliners,” who make up 29% of the marrieds) versus those for whom it has gotten better (“improvers,” who make up 12% of the marrieds) reveals sharp contrasts. While just 35% of those for whom household finances improved (“improvers”) said their relationship faced new stressors, among those for whom finances got worse (“decliners”), a full 45% reported their relationship faced new stressors. For the 59% of marrieds who reported no change in their financial situation (“steadies”), 28% said the pandemic has increased stress in their marriage. Clearly, COVID has exacted the biggest emotional toll on married Americans who have suffered the most financial harm from the pandemic.

Marriage Is Down. Given the lockdown, not to mention dramatic increases in unemployment and economic insecurity in the wake of COVID, it’s no surprise that the American Family Survey also suggests the marriage rate is falling—and will keep falling in the near future. Among unmarried Americans ages 55 and younger, 6% reported an increase in wedding plans, while 7% said they are postponing their marriage. America’s marriage rate, already at a record low, seems destined to fall further in 2020 and 2021.

Initial data from the states indicates a dramatic decline in marriage for 2020, with year-to-date marriage licenses issued down 18% in Hawaii, 17% in Florida, 9% in Arizona, and 8% in Oregon (the four states with data available throughout the lockdown months). Figure 2 shows the year-over-year change in marriage certificates filed in each month for each state. 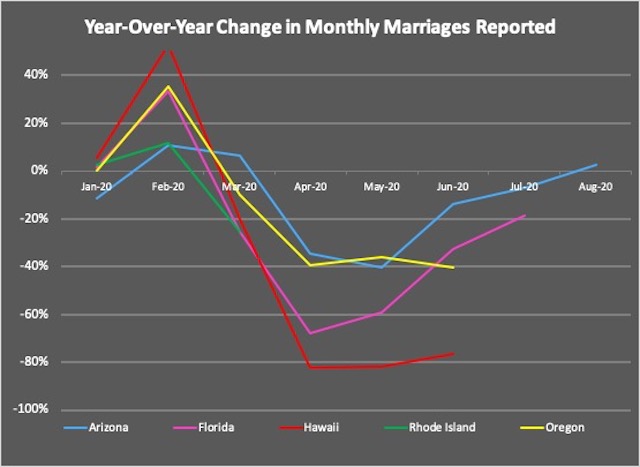 As can be seen, there is a huge decline during the key COVID months. Most states have not recovered to pre-pandemic levels of marriage certificates, let alone made up for the lost marriages. It’s possible that, after COVID, there will be a period where marriages run above trend due to delayed marriages getting finalized, but it’s unlikely to fully offset losses given increasing relationship strain, economic turmoil, and decreased romantic coupling.

More or Less Sex? As the pandemic unfolded, initial media reports suggested that lockdowns would lead more people to get busy. For married adults ages 18-55, the AFS paints an ambiguous portrait regarding sex. Figure 3 shows the share of married adults ages 55 or younger who reported having sex weekly or more often. Married sex rose from 2015 to 2016, then declined sharply in 2018, then rose again in 2019. But the share of husbands and wives reporting weekly sex remained steady in 2020. This suggests that being stuck together all the time during COVID did not boost married couples’ sex life. 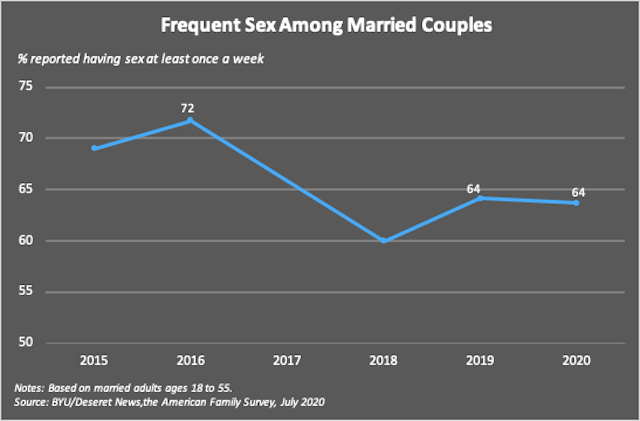 But the AFS also asked Americans if their sexual frequency had risen or fallen since March. Here, the story is more positive for married Americans ages 18-55, as Figure 4 makes clear. More married men and women reported an increase in sex since COVID than reported a decline. 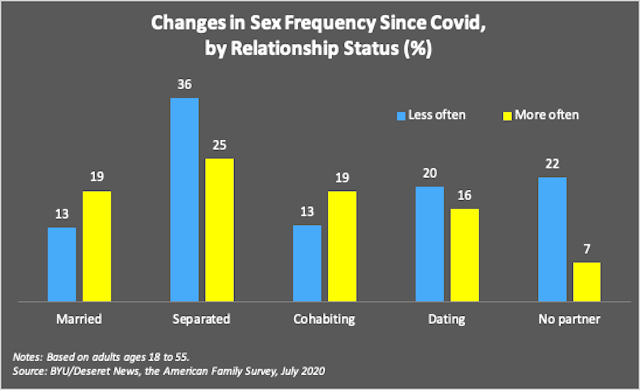 These effects vary by relationship status, as well. As can be seen, for both married and cohabiting adults, reports of sex are up since March. But for those without a live-in sexual partner, reductions in sexual frequency greatly outnumber increases: the share of single adults with a decline in sexual frequency is three times as much as the share with an increase. In other words, here we have some evidence the lockdowns boosted sex among married people and cohabiters ages 18-55, but reduced sex for their peers who were uncoupled. “Pandating” means not dating.

There is also some surprisingly encouraging news about marriage in the time of COVID.

More appreciation, deeper commitment. When times are tough, men and women often turn towards family and friends for support, sustenance, and solidarity. This is certainly true in 2020. Amidst so many trials and tribulations—a global pandemic, the worst recession in a century, political and social turmoil, and wildfires, to name a few—many husbands and wives have seen their marriages grow stronger. 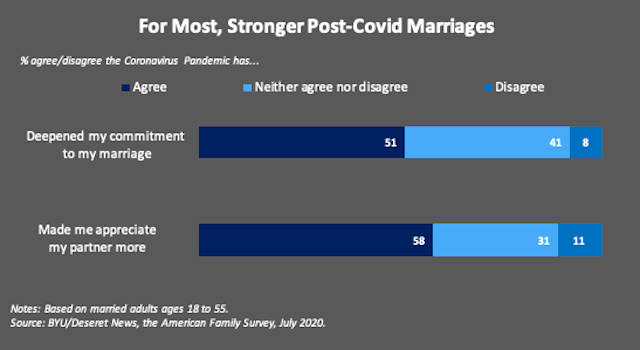 In fact, reports of appreciation and commitment are up in post-COVID America for married couples. As Figure 5 indicates, 58% of married men and women said that the pandemic has made them appreciate their spouse more. Likewise, 51% of husbands and wives reported that the events of the last seven months have deepened their commitment to marriage.

Especially interesting here is that reports of increased commitment and appreciation are particularly higher for couples who saw their financial fortunes fall in the wake of COVID. Some 65% of married adults whose financial situation got worse said the pandemic has made them appreciate their spouse more, and 60% said it has also deepened their commitment to their marriage. For many married Americans, especially those who did experience major financial hardship, this tumultuous year has caused them to turn towards, not away, from their spouse.

Less divorce? The press has been filled with breathless accounts of couples struggling to navigate the lockdown with one another, failing, and ending up headed towards divorce court. “Divorce rates jumping in corona-quarantined couples” read one headline, in a story with a divorce attorney speculating that, “People who have enjoyed busy lives suddenly find themselves confined together, at a time of incredible anxiety.” While there is no question that some couples are struggling, the evidence generally points in the opposite direction.

The share of married people who said their marriage is in trouble fell in 2020. Specifically, as Figure 6 indicates, the share of married men and women ages 18-55 saying their marriage is in trouble declined from 40% in 2019 to 29% in 2020. This suggests that divorce will fall in 2020, a pattern we also saw play out in the Great Recession of about a decade ago. During that recession, divorce fell 7% in 2009 as couples steered clear of divorce court in the depths of the recession. Although divorce went up a bit after that, it then fell again starting in 2013, which means that marriage in America generally headed in a more stable direction in the wake of the last recession. 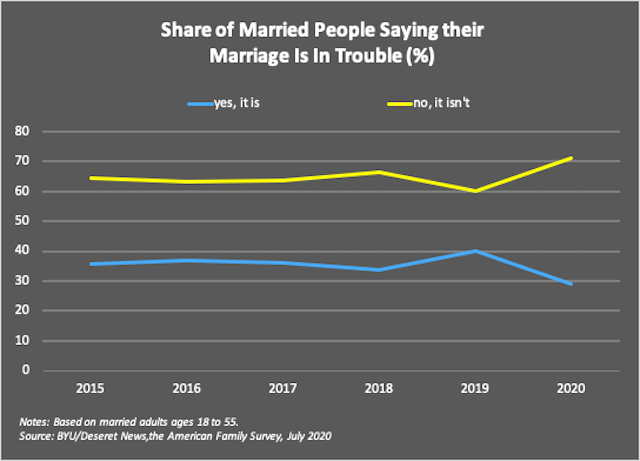 Of course, amidst the pandemic, couples in financial distress were more likely than others to say that their marriage is in trouble. About one in three (33%) of the decliners reported such trouble, compared with 26% of steadies. Surprisingly, the share who said their marriage was in trouble was also higher among improvers (35%). It seems that financial stability during COVID is linked to stable marriages. A change in financial circumstance, in both directions, may lead to turmoil in marriage during the pandemic. Note that the survey question here was asking about marriage trouble in the past two years, so we cannot be sure how much COVID per se is shaping the results.

There have been innumerable hot takes about the effects COVID would have on marriage and family life in America. The truth turns out to be rather complex: married people faced extra stresses, the marriage rate is likely to dip, the impact on married sex is unclear, husbands’ and wives’ commitment to one another has deepened, and, at least in the short term, divorce is likely to fall. Moreover, the pandemic’s family fallout seems to have hit working-class and poor couples especially hard, as they are the very couples most likely to see their financial fortunes decline since March. But our main conclusion from this data is actually about resilience: an epochal pandemic has struck America, causing massive disruptions and changes in family and work life, and the effects are, on the whole, difficult to discern. On balance, the news about marriage in the time of COVID is better than expected.