A recent Institute for Family Studies research brief called “The Paradox of Adoption” reported that adopted children had relatively high rates of behavior and learning problems in kindergarten and first grade, despite having home environments that were well above average in terms of family income and parent education levels. This follow-up report provides supplementary information on the prevalence of disabilities among adopted children, and on how adoptees fare in late elementary and middle school.

Like the earlier brief, the present analysis is based on the ECLS-K, a longitudinal study of a national sample of kindergarten students that was conducted by the National Center for Education Statistics. Because of the inevitable attrition that occurs in any large-scale longitudinal study, the estimates of achievement and behavior in the later grades are based on smaller numbers of children (86 adopted teens in the panel of students who remained in the study throughout the duration) and thus have relatively large margins of error. Despite this problem, statistically reliable contrasts between adopted and other student groups did emerge.

By Eighth Grade, Half of Adopted Children Have Diagnosed Disabilities

At the start of kindergarten, nearly one in four adopted children had a diagnosed disability, according to their adoptive parents. Disability was twice as prevalent among adopted kindergartners (24 percent) as among those living with both birth parents (12 percent), as Figure 1 shows. Though apparently greater, the figure for adopted children was not reliably different than the disability prevalence among children from single-parent or step-families (17 percent), nor children living with relatives other than their mother or father or with unrelated foster parents or guardians (19 percent). These estimates are adjusted for differences across groups in students’ average age, gender, and racial-ethnic composition, parent education and family income levels, and family poverty status. 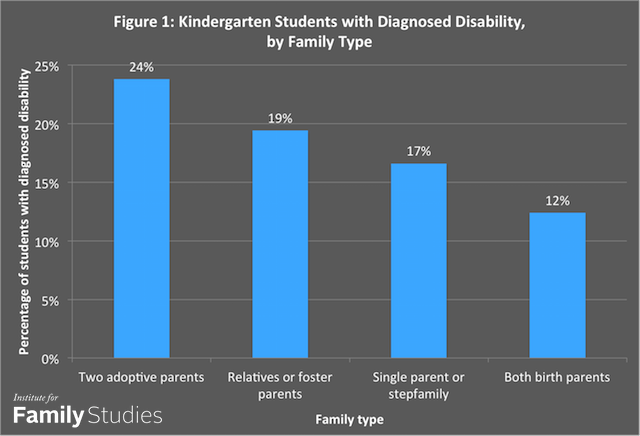 There are two things to bear in mind about these alarmingly high numbers. First, most of the conditions with which adopted children are diagnosed are not severe intellectual impairments or clear-cut physical disorders, but poorly defined conditions like “emotional disability,” “learning disability,” or “attention-deficit disorder.” Second, adoptive parents are especially sensitive about the health and wellbeing of their charges, and energetic in obtaining disability diagnoses (and attendant medical, psychiatric, and educational services) for their adopted children. Some of the disability diagnoses that adopted children received would probably not have been sought or obtained had they lived in other types of families.

By Eighth Grade, One-Third of Adopted Students Have Been Suspended

Nonetheless, the behavioral and learning problems that many adopted children encounter in school are real. These problems tend to be concentrated among—but not limited to—those with diagnosed disabilities. The severity of the behavioral issues is indicated by the fact that one-third of all adopted children had received at least one out-of-school suspension by the spring of eighth grade. By contrast, among eighth graders living with both birth parents, 10 percent were suspended at least once, and among children living with a single parent or in a stepfamily, 17 percent were suspended. (See Figure 2.) These figures are again adjusted for differences across groups in students’ average age, gender, and racial-ethnic composition, parent education and family income levels, and family poverty status. 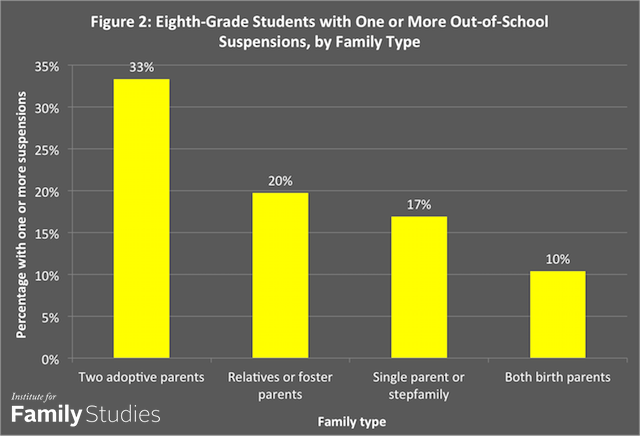 The adopted students who remained in the ECLS-K sample through eighth grade also showed subpar performance on the battery of reading, math, and science assessments that were administered as part of the study. In the spring of eighth grade, the adopted students scored at the 31st percentile on a composite achievement scale based on the three subject area assessments. By contrast, as Figure 3 illustrates, students living with both biological parents scored at the 55th percentile. The adopted children also had significantly lower average scores than students from single-parent or step-families. These students scored at the 48th percentile. These figures are adjusted for the same demographic and socioeconomic differences across groups listed earlier. 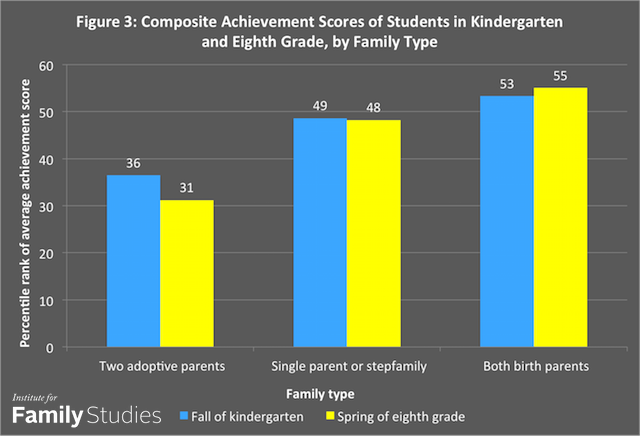 Unsurprisingly, adopted students with diagnosed disabilities appear to do more poorly academically than those without such disabilities: the former were at the 29th percentile, while the latter were at the 33rd percentile. However, because of small subsample sizes, the result of this comparison is not statistically reliable.

Note that the relative achievement of adopted students might well have been more favorable had their scores been adjusted for the (generally lower) education levels of their birth parents, rather than for the (generally higher) education levels of their adoptive parents. Unfortunately, it was only possible to carry out such adjustments on a fraction of the adopted children in the sample, because, as noted below, the educational attainment of the birth mother and birth father were not known by many adoptive parents. Furthermore, because the majority of birth mothers were teenagers when they gave birth to the children they gave up for adoption, their educational attainments at that time would not necessarily reflect the educational credentials they attained after the child’s birth.1

Is Maternal Substance Abuse the Principal Cause of Adopted Children’s Problems?

Some commentators on the “Paradox of Adoption” brief complained that it paid insufficient attention to what they viewed as the principal cause of the behavioral and learning problems of adopted children, namely, “fetal alcohol syndrome,” or, more broadly, maternal abuse of drugs and alcohol during pregnancy. Is that the main culprit behind adopted children’s elevated risk of struggling academically and behaviorally? We can’t be sure.

It is worth noting that the ECLS-K data demonstrate quite clearly that many adoptive parents are poorly informed as they enter into the adventure of adoption (and they deserve to be commended for entering into it nevertheless!). Many parents are unable to obtain basic information about the family backgrounds of their adopted children, let alone information about maternal substance abuse during pregnancy. For example, for more than half of the adopted children in the ECLS-K national sample, the adoptive parents did not know how far the birth mother went in school. For nearly a third of children (31 percent) how old the birth mother was when she started having children was unknown.

Adoptive parents possess even less information about the characteristics of the biological fathers of their adopted children. For more than three-quarters of adopted children in the ECLS-K (78 percent), the educational attainment of the birth father was not known. In many cases (30 percent), the adoptive parents were not sure about the birth father’s race or ethnic origin.

Given this lack of detailed information about birth parents, claims that the learning and behavior problems of adopted children are primarily due to fetal alcohol syndrome or other prenatal conditions must be regarded as speculation. This is not to deny that prenatal substance abuse may play a role in the genesis of some adopted children’s problems. But how extensive a role it plays has not been established. Even intensive studies with local U.S. samples that have tried to collect information about the birth mother’s alcohol and drug use during pregnancy have found that the causal picture is complex and that genetic and parent behavioral factors—both those of the birth and the adoptive parents—have to be taken into account.2

Obviously, more data are needed, especially data based on representative samples of the population. Highlighting the problems that many adoptive families experience may help to generate support for future studies aimed at clarifying these issues.

1. Statements about the birth mothers’ ages at birth and education levels are based on those adoptive families where these characteristics were known to the adoptive parents.