There’s a growing concern that young adults today are experiencing an epidemic of loneliness, social isolation, and disconnection. A lot of blame is being placed on social media, or more recently the pandemic. Delayed family formation is another likely factor—young adults are marrying laterthan they once did. But what if Gen Z is lonelier today not simply because of how much time they spend on social media, or because they’re single. What if young adults today are lonelier because of how they were raised?

Americans who belong to Generation Z (born between 1997 and 2012) are far more likely to say they were lonely growing up. A majority (56 percent) of Gen Zers report they felt lonely at least once or twice a month during their childhood. In contrast, only about one in four (24 percent) Baby Boomers say they felt lonely this often as children.

But what accounts for the massive differences in childhood loneliness across generations? Much of it is likely tied to changes in family structure that have occurred over the past few decades.

Compared to previous generations, Gen Zers are far more likely to have been raised in single-parent households. A recent report from the Pew Research Center found that nearly one-quarter of US children live in single-parent homes, a rate higher than any other country. This trend may be having an effect on childhood loneliness.

New findings from the American National Family Life Survey show that Americans raised in single-parent homes are more likely to report having felt lonely growing up than those raised in two-parent households. They’re also more likely to miss out on formative experiences, such as daily family meals, an activity that has been associated with lower rates of depression. Only 37 percent of Americans raised in a single-parent home report having had regular meals with their family growing up, compared to 69 percent of those raised in two-parent households.

The experience of living through a parental divorce may also explain higher rates of childhood loneliness among young adults. Past research has shown that adolescents with divorced parents are more likely to struggle socially and experience greater feelings of social alienation. More recent studies bear this out. A 2021 survey found that more than half (52 percent) of Americans raised by divorced parents felt lonely at least once or twice a month growing up. In contrast, only a third (33 percent) of Americans raised by married parents say the same. 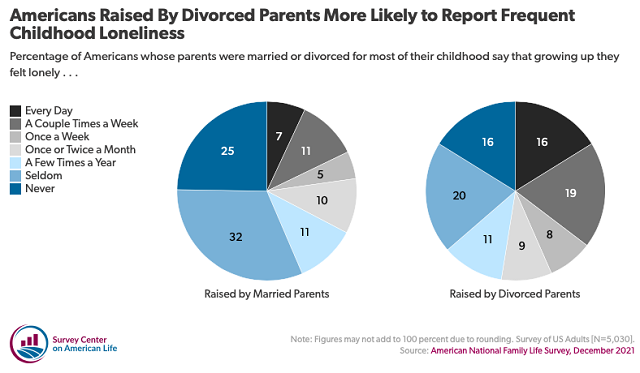 Finally, shrinking family size may play a part. Young adults today are significantly less likely to have been raised in large families. Even before the pandemic completely upended the conversation around child cost and family size, Americans were increasingly drawn to smaller families. A recent report shows that only children are also more likely to have been lonely growing up than those with siblings were.

It's impossible to rewrite history, but childhood experiences do not necessarily dictate how we live today. The good news is that we know a lot about how Americans make and maintain social connections. Research has shown that attending college is associated with higher levels of social connectedness. So is belonging to a religious community. Even regularly spending time at a third place—such as a coffee shop, library, or public park—can help foster social interactions and a sense of belonging.

There are no simple solutions to the rising rates of loneliness in American society – probably because there is no single cause. Whatever interventions we attempt should acknowledge that young adults did not suddenly become lonely after they reached adulthood. For many, formative experiences continue to influence and shape their social lives.

Editor’s Note: This essay is reprinted with permission from the Survey Center on American Life. Read the original essay here.