Do Cousins Make You 'Dumber'?

There’s a long-standing debate in social science about the importance of “birth order.” We’ve all heard that older and younger siblings tend to have certain personality traits stemming from their childhood family interactions—claims that are, alas, mostly overblown. However, older siblings do score slightly higher on intelligence tests and other academic measures, perhaps thanks to more intensive parenting and nurturing during their early years before additional siblings come along to suck up all the oxygen.

But forget siblings. A new working paper from Kieron Barclay and Dalton Conley claims that even cousins can have a similar effect, possibly by taking up the resources of secondary caregivers such as grandparents, aunts, and uncles. Using data from Sweden on kids born between 1972 and 2003, it finds that coming later in one’s maternal cousin group can reduce a child’s high-school GPA rank by up to 5 percentage points (e.g., being at the 55th percentile instead of the 60th), with an effect for the paternal cousin group a little less than half as big.

It’s a striking claim that, frankly, pushes the boundaries of plausibility, and some of the study’s own models find less dramatic results. But thanks to Sweden’s “registry” containing extensive information about its entire population, the authors were able to design the study carefully, answering, at minimum, the most obvious ways for an analysis like this to go wrong.

For example, a major obstacle in birth-order research is that birth order is correlated with fertility. If third children have different traits from second children, this could mean that being a third child causes the difference ... or we could be comparing apples with oranges, because third kids are, on average, from bigger families than second kids. (A lot of second children will be from two-child families, but by definition none of the third children will.) More fertile couples stand out religiously and demographically, so this is a big problem, and it could easily apply to cousin groups too.

The way to fix this is to recruit entire families into your study and make comparisons within them. See if third kids have different traits from their own older siblings, rather than comparing them with second children in general.

In most countries it would be hard to get data on an entire cousin group for this type of study— especially a large cousin group spread out across several nuclear families, all of whom would probably need to consent and provide private information. But again, this is Sweden we’re talking about, and it’s all in the registry. The authors put together numerous models that compare kids with their own siblings and cousins to see if cousin order matters.

One model, for example, compares siblings with each other, controlling for their birth order within the nuclear family, to see if kids who came later in their cousin group thanks to births by aunts fared worse than kids who came earlier. Another model is limited to only children—so their own siblings can’t affect the analysis—and checks to see if such kids do worse if they come later in their cousin groups. Yet another approach is to treat twin births to aunts as a natural experiment: Something that happens essentially at random but affects how many cousins one has.

Here are the results of some of the models, often run separately for maternal and paternal cousins. The results are quite consistent directionally, though the effect seems larger and clearer for maternal cousins, and some models generate much bigger estimates than others. 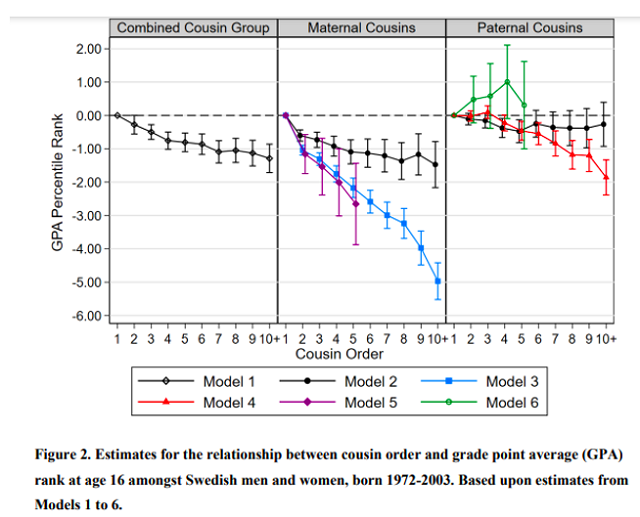 It’s also worth noting that the results appear much less dramatic in models that calculate the effects separately for each place in a child’s nuclear-family birth order (rather than simply controlling for birth order generally). There’s still a clear effect in which first-borns do better if they come earlier in their maternal cousin group, but the other results are lackluster or inconsistent. In other words, if you were the first baby born to your mother, but your mother’s siblings had kids earlier than she did, you can be angry at those cousins for stealing all the extended-family love and making you ‘dumber.’ But otherwise, you can probably chill.

The authors also directly compare the effects of siblings and cousins. Unsurprisingly, the effect of siblings is much larger and more consistent, as they find that being a second child does more GPA damage than having 5+ maternal cousins as a first child.

Perhaps the takeaway is that while cousins are bad for your grades, they’re not nearly as bad as siblings. Or perhaps grades aren’t everything anyway: A bigger family thins resources, but it also makes you less lonely.