by Jeffrey Dew Brian J. Willoughby, @drbrian_relate
Back to Blog

If popular portrayals of sex between religious couples are any indication (see The Handmaid’s Tale for perhaps an extreme example), then the phrase “married religious sex” probably connotes images of sex that is boring, rule-bound, unsatisfying, or perhaps even oppressive. On the other hand, the phrase “good sex” probably evokes images associated with passion, adventure, fulfillment, and just plain fun—ideas that many in our culture link to singlehood rather than married life and religion. Indeed, cultural commentator David French recently asked:

… how many happy, sexually vibrant religious married couples have you seen on popular television shows or movies — even in this era of fragmented, targeted entertainment? Compare that with the number of times you’ve seen rebellion from religion glorified and religious leaders mocked and despised. And while marriage fares better on the big and small screens, single people are generally portrayed as so sexually active that they behave unlike virtually anyone you’ve ever known. The collective message that’s been delivered is something like this— singleness is exciting, religion is oppressive, and marriage is where you “settle down” (sometimes for good, sometimes for ill).

While there may be some anecdotal truth to the notion that religious couples struggle to keep sex exciting, this is likely the case for many married couples, whether religious or not.1 Furthermore, scholars have not studied the association between religiosity, the extent to which religion informs individuals' daily lives and sexual satisfaction in any systematic way. The cultural narrative of unsatisfying married religious sex stands, even though it is a question that can be answered by empirical data.

In a recent study, published online by the journal Psychology of Religion and Spirituality,2 we took a first step toward answering this question, using data from the National Marriage Project’s “Survey of Marital Generosity” (a national sample of 1,300 married couples with spouses between the ages of 18 and 45). The survey asked participants to rate how much they thought that: “God [was] at the center of [their] marriage,” or what we describe as “marital sanctification.” It also asked participants how frequently they attended religious worship services with their spouse, and how often they participated in home-based worship activities as a couple. Finally, it asked couples how satisfied they were with the sexual aspect of their marriage. 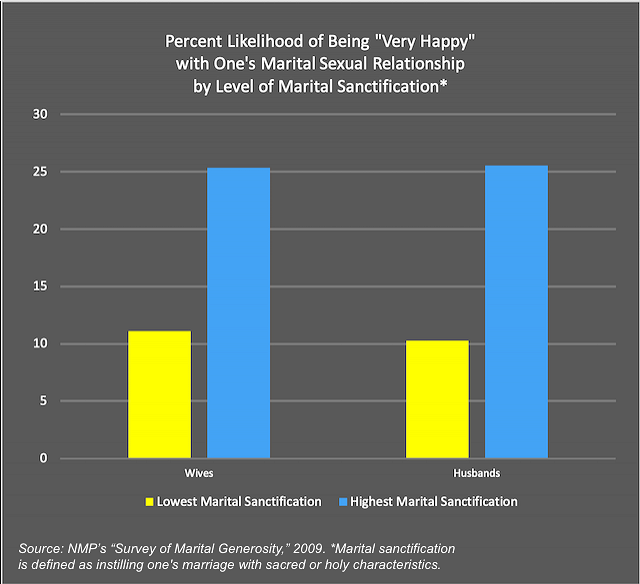 Note: Assumptions to create the predicted percent likelihoods=White participant with one child in the home,
who has “some college or an associate’s degree,” and who is in the third income quartile in the data.  The differences
between the lowest and highest marital sanctification groups would not change if these assumptions changed.

Importantly, we examined the reasons why religiosity and sexual satisfaction might be linked for married couples. We posited that religious spouses might invest more in their marriage and work on strengthening their marriage in nonsexual areas (e.g., by enhancing their commitment and decreasing their conflict). In fact, many studies have found that religious individuals report happier marriages and better interactions with their spouses than their secular counterparts.4 We then surmised that the stronger and more engaged marriage created by many religious couples might be associated with greater sexual satisfaction. That is, nothing enhances libido like having positive, nonsexual interactions with one’s sexual partner, and religious couples who believe their marriage has spiritual and religious importance may be more likely to invest in these positive interactions.

Our results supported these ideas, especially for husbands. For the husbands, religion was associated with more positive relationship interactions, such as less conflict, greater commitment, and more frequently doing kind, “little things” for their wives. Furthermore, when these relationship interactions were added to the model, husbands’ marital sanctification and joint-religious activities in the home were no longer related to sexual satisfaction. We found the same for the wives, except that the findings were not quite as definitive as for husbands. This means that it is likely these bumps in positive interactions could be the reason why sanctification and religious behaviors appeared linked to sexual satisfaction.

More extensive research on this topic is warranted. In spite of the data strengths, this is only one study. Moreover, because the couples were not followed over time, our study lacks a crucial longitudinal component that would allow us to be more confident in the associations we found.5

Although popular culture will likely continue to exploit religiosity for its stereotypes (including sexual stereotypes), the reality may be a bit more complex. Indeed, when taken together, our findings suggest that a new adjective best describes marital sex between religious couples: “satisfying.”

2. Dr. Jeffrey Dew and Brian Willoughby, the authors of this IFS entry, also authored the study published in Psychology of Religion and Spirituality.

5. We would suggest, though, that it would be theoretically problematic to suggest switching the direction of the association. That is, it is highly unlikely that high levels of sexual satisfaction engender greater religiosity. But data that followed couples over time would be stronger evidence for this study.

Me, You, and Us: We-Ness and Couple Identity