Are Couples Who Eat Together Happier Together?

A number of articles and books have investigated the recipe for a happy marriage. But is the eating of food together itself part of the recipe? Do couples who eat a meal together have better quality relationships?

Along with my colleague Professor Steve McKay at the University of Lincoln, I delved into that question using the UK Time Use Survey conducted in 2014 and 2015. More than 7,600 people in 4,000 households were asked to record what they were doing throughout one weekday and one weekend day, putting the detail into ten-minute time slots. From this, we gathered 46,000 data points from those who lived together as a couple. 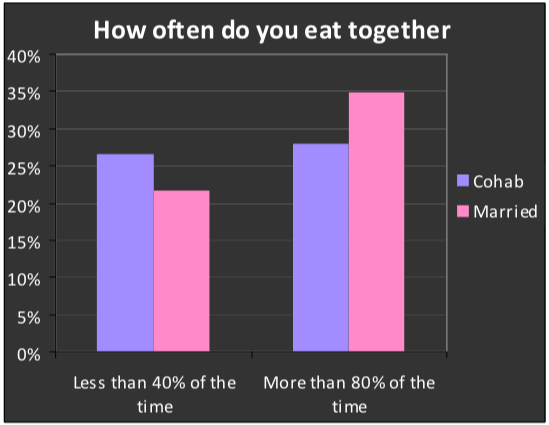 Source: Marriage Foundation. Based on analysis of the UK Time Use Survey, 2014-15.

Married couples who eat together are more likely to report maximum happiness with their relationship. 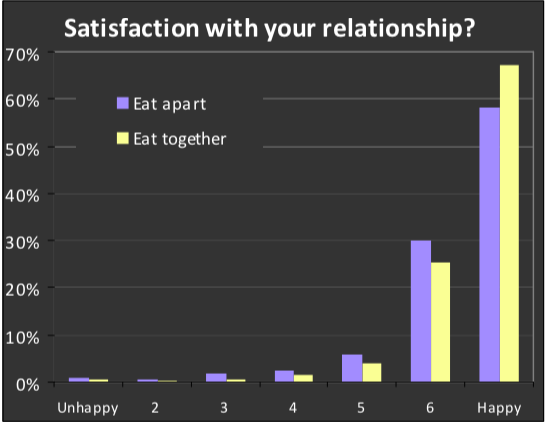 Source: Marriage Foundation. Based on analysis of the UK Time Use Survey, 2014-15.

Couples who eat together are 19% more likely to enjoy their meal.

Couples who use their phone during meal times are 8% less likely to enjoy their meal.

Overall, these findings show a clear, positive link between eating together as a couple, enjoying the meal, and having a happy relationship. Of course, this is a cross-sectional snapshot, so we have to be cautious about cause and effect. It could be either that happy couples enjoy eating together or that eating together helps make couples happy.

However, the questions about enjoying the meal do suggest a direction of travel. It seems fairly implausible that couples eat together because they enjoy their meals. It seems a lot more plausible that couples enjoy their meals because they have shared it together. It’s only a small step from here to suggest that happiness might also be the consequence of eating together.

So, if you want a happy relationship and want to enjoy your meals more, then eat together as a couple and put that phone down!