Three Reasons Not to Make This January Your Divorce Month

by W. Bradford Wilcox, @BradWilcoxIFS Samuel Sturgeon
Back to Blog

After putting thoughts of divorce to the side over the holidays, unhappy husbands and wives are more likely to entertain thoughts of divorce in the new year. Just look at Google searches for terms like “divorce lawyers” and “file for divorce” in the last few years (see below); clearly, they spike in January. There’s a reason January is known as “divorce month” to many family lawyers.

January is a popular month to go ahead with divorce partly because people do not wish to put their children (or their spouse) through the trauma of a divorce over the holidays, and also because the arrival of the new year prompts reflections and resolutions about the state of their marriage. “As soon as New Years is over, then they are ready to start a new life and be done with the marriage,” said Tamara Fackrell, a divorce attorney in Salt Lake City, Utah, talking about husbands and wives who are distressed, unhappy, or otherwise looking to leave their marriage. She adds that a more pragmatic consideration also enters into the calculus for some: tax considerations make a January divorce filing appealing to some, as the IRS takes into account taxpayers’ marital status on December 31. 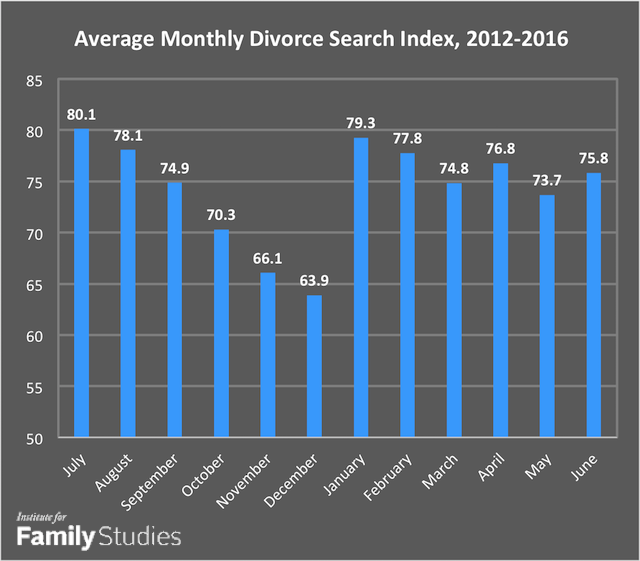 In some cases, divorce may be the best option for husbands and wives in a difficult or dangerous marriage. Domestic violence, drug and alcohol abuse, and infidelity—among other things—are certainly legitimate grounds for considering separating in the new year. But for those who are married with children, and whose marriages are not marked by serious conflict (domestic violence or chronic hostility), there are at least three reasons to push the pause button before heading for divorce court.

For the Kids’ Sake

First, consider the kids. Though it’s true that most children of divorce turn out “okay,” as the psychologist Mavis Hetherington observed in her book For Better or For Worse: Divorce Reconsidered, a large minority do not. Divorce typically doubles or triples the odds that children will experience depression, delinquency, school failure, or future relationship difficulties. For instance, one study found that 33 percent of girls whose parents divorced had a teen birth, compared to 11 percent of girls whose parents were continuously married. A Pew study found that only 15 percent of children from intact, middle-class families experienced downward economic mobility in adulthood (having less family income than their parents), compared to 23 percent of children from middle-class families whose parents divorced. Downward economic mobility was also more common for children from rich families whose parents divorced. Today, young adults (25-40) from divorced families are significantly less likely to be married (39 percent) than young adults from intact, married families (50 percent), according to the 2010-2014 General Social Survey.

What’s particularly important for parents who are contemplating divorce to know is that the effect of a breakup on children generally varies by the level of conflict in one’s marriage. If the marriage is marked by violence, regular screaming bouts, or other forms of chronic conflict, parting ways can be best for the kids. Indeed, research by scholars like sociologist Paul Amato indicates that children in such high-conflict families do better when their parents divorce, compared to staying together.

But children living in families marked by low-conflict marriages are more likely to be harmed by parental divorce. That’s because, in Amato’s estimation, their parents’ divorce is “unexpected, inexplicable, and unwelcome.” These low-conflict divorces seem to be particularly damaging emotionally and socially, insofar as they are surprising to children and undercut their faith in the possibility of lifelong love.

Children living in families marked by low-conflict marriages are more likely to be harmed by parental divorce.

Moreover, these low-conflict divorces are not rare. The research suggests that the majority of divorces involving children take place in such low-conflict marriages. This led Amato, a recent chair of the American Sociological Association section on family, to conclude: “when parents exhibit relatively little overt conflict, children appear to be better off if their parents stay together.” This is why married mothers and fathers in a low-conflict marriage should rethink divorce. It may look like an appealing option for them, but it’s likely to be unappealing to their children.

But does sticking it out mean that married men and women are destined to live a life of marital unhappiness? Not necessarily.

One study by sociologist Linda Waite and her colleagues tracked husbands and wives who were unhappy in the late 1980s over the next five years. It found that, among those who remained married, 64 percent reported they were happily married five years later. What’s more, those who remained married were just as likely to report they were happy with life, compared to those who divorced within that five-year window.

A more recent study found that most married men and women who had entertained serious thoughts about divorce were happy they had not divorced. This study found that 28 percent of married individuals (ages 25-50) reported that they have had serious thoughts about divorce in the past but are still married, and 88 percent of this group reported that they are "glad" they are still married. In other words, for the average husband and wife who is unhappily married, this research suggests that divorce will not increase their odds of being happy in life and might cause them to miss the chance of seeing their marriage take a turn for the better.

Husbands and wives who are thinking about divorce should also think about their long-term financial welfare. That’s because men and especially women are more likely to avoid poverty and to have a decent retirement in their Golden Years if they don’t get divorced. The economist Timothy Smeeding found that the proportion of elderly women living in poverty was highest among those who were divorced/separated (37 percent); by contrast, rates were much lower among married women (10 percent).

Unhappily married parents in low-conflict marriages who are thinking about divorce in the new year, then, have multiple reasons to think long and hard before divorcing. First, there is a good chance the quality of their marriage will take a turn for the better if they remain together. Second, the odds of moving into retirement in good financial shape are markedly higher if they steer clear of divorce. Finally, and most importantly, the best thing that husbands and wives in low-conflict marriages generally can do for their children is to seek to renew their marriage, not end it.

Married mothers and fathers who are thinking about divorce also should be aware of the variety of resources to help them revive their marriage. Resources like the Institute for Family Studies’ Answering Your Divorce Questions and the Doherty Relationship Institute’s Discernment Counseling provide further information for those considering divorce, as well as counseling and other options for husbands and wives interested in turning their marriage around. So, for husbands and wives whose marriages are in trouble, taking the long-term view—both for yourselves and especially your kids—might cause you to rethink making this January your divorce month.

W. Bradford Wilcox is a senior fellow of The Institute for Family Studies and the Director of the National Marriage Project at the University of Virginia. Samuel Sturgeon is president of Demographic Intelligence, a full-service demographic consulting firm that specializes in fertility and marriage projections.