The racial and ethnic composition of the adopted child population in the U.S. has changed dramatically in less than a generation. This IFS research brief compares adopted children in two large national studies of kindergarten students conducted a decade apart by the federal Department of Education1. The proportion of adopted kindergartners being raised by a mother of a different race or ethnic group rose by 50% between 1999 and 2011. The proportion of adoptees with Asian backgrounds nearly tripled over the same time period. Paradoxically, the fraction of adopted students who are African-American seems to have fallen. What has not changed is that a large majority of adoptive parents are white, older, well-educated, and relatively affluent.

Underlying these demographic shifts are a number of other trends affecting the supply of adoptable infants and the demand for those babies by childless couples in this country. Due primarily to dramatic reductions in pregnancy and birth rates among teenagers, the domestic supply of adoptable infants has declined.2 When unmarried young women do give birth, more of them are attempting to raise their offspring on their own, or with assistance from grandparents or other relatives, rather than putting the child up for adoption.3 Child welfare agencies often favor the placement of foster children with relatives, rather than with unrelated adoptive parents.4 In addition, activist pushback against upper middle-class whites adopting black or American Indian babies from poor families may be influencing couples toward adoption choices that are less controversial.

However, the demand for adoptable infants remains robust5 as many mature couples experience impaired fertility,6 having put off trying to have children until their late 30s or early 40s. Faced with a shortage of domestic candidates and barriers to taking in some neglected or abused children, potential adopters often look abroad for infants or toddlers in need of permanent homes.7 While international adoptions are not necessarily or intentionally interracial, they often turn out that way, as when white American couples adopt children from China, Guatemala, or Ethiopia.8

A racial and ethnic breakdown of adoptive kindergartners in the U.S. in the spring of 2011 is shown here in Figure 1.9 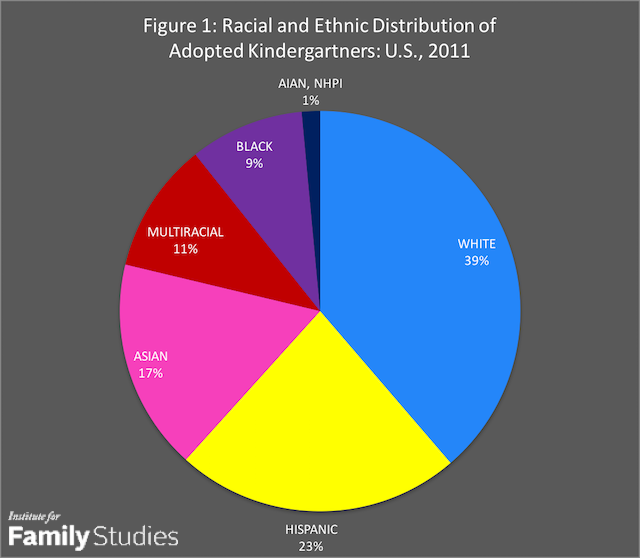 Source: Zill, N. (2017). Analysis of data from the Early Childhood Longitudinal Study of the Kindergarten Class of 2010-2011. National Center for Education Statistics, U.S. Department of Education.

As the figure indicates, white children made up the largest segment of adoptees; but, at 39%, they were far from a majority. Hispanic children were the next largest portion, representing nearly 23% of all adoptees, followed by Asian children (17%), and multiracial children (11%). Black students represented only 9% of adoptees. Their “slice” of the adoptee pie was surprisingly small, given that black children were overrepresented among youngsters in foster care and among those living with grandparents or other relatives other than their birth mothers and fathers.10 Children of American Indian or Alaska Native backgrounds, as well as those of Native Hawaiian or Pacific Islander origins (AIAN/NHPI), made up the remaining 1% of adoptees.

Compared to their proportions in the general kindergarten student population, Asian and multiracial children were overrepresented among adoptees, whereas white children were underrepresented. For example, white students made up 51% of all kindergarten students in 2011, Asian children accounted for 4.6%, and multiracial children accounted for 4.2%. 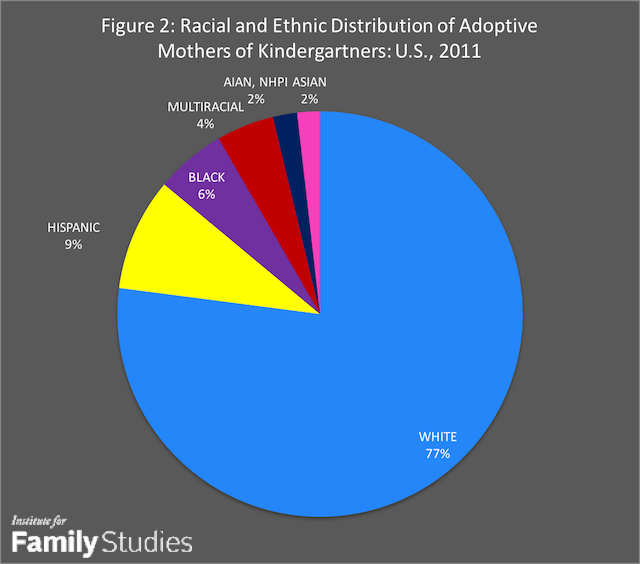 Source: Zill, N. (2017). Analysis of data from the Early Childhood Longitudinal Study of the Kindergarten Class of 2010-2011. National Center for Education Statistics, U.S. Department of Education.

For both Asians and Hispanics, what accounts for the disparity between the size of the adopted child and adoptive mother proportions is foreign-born children of the respective race or ethnicity who have been adopted by American couples, primarily white parents. For Asians, these were mostly children adopted from China and South Korea. For Hispanics, they were children adopted from Guatemala, Colombia, and other Central or South American countries.

Not only were most adoptive parents white, they were also older, better educated, and more financially secure than mothers and fathers raising their own biological children. The mean age of adoptive mothers in the 2011 survey was 43 years, significantly higher than the 35 years old average for mothers in families with both birth parents and higher the 31 years old average for mothers in single-parent and step families. Only children living with grandmothers, aunts, or other relatives, or in foster families, had older mother figures (just under 50 years old, on average).

Has the interracial share of adoptions grown over time? A parallel analysis of data from the prior Early Childhood Longitudinal Study, known as the Kindergarten Class of 1998-99, reveals that it has.12 As shown in Figure 3, 29% of all adopted kindergartners were of a different race or ethnicity than their adoptive mothers in 1999. (Conversely, 71% were of the same race and ethnicity.) By 2011, the different-race proportion had risen to 44% percent, a statistically significant increase, and the same-race proportion had fallen to 56%. 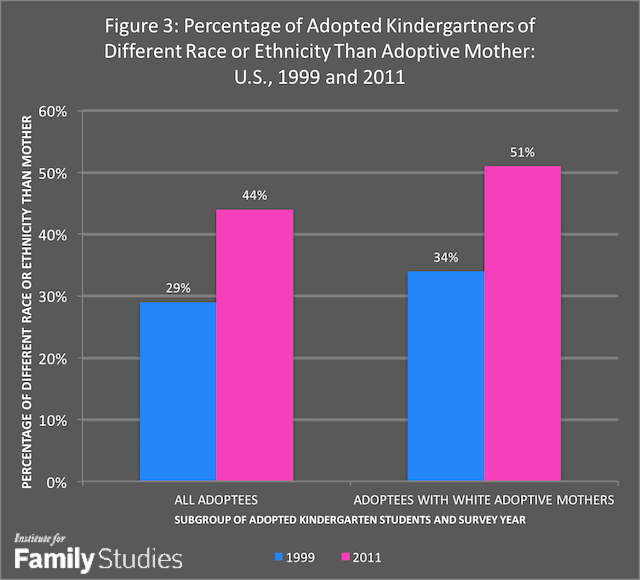 For adopted kindergartners with white adoptive mothers, the fraction of children who were non-white grew from about one-third in 1999 to just over half in 2011 (see the right half of Figure 3). Thus, the majority of children adopted by white mothers and fathers are now non-white.

A Changing Mix of Races and Ethnicities

The relative size and prominence of different racial and ethnic groups of adoptees also shifted between 1999 and 2011. Changes over the decade in the proportions of adopted students from specific ethnic groups are shown in Figure 4. Bear in mind that not all of the apparent changes are statistically reliable given the small numbers of sample children involved. Two shifts that are statistically significant are the increase in the proportion of adoptees of Asian origin and the decrease in the African-American proportion. 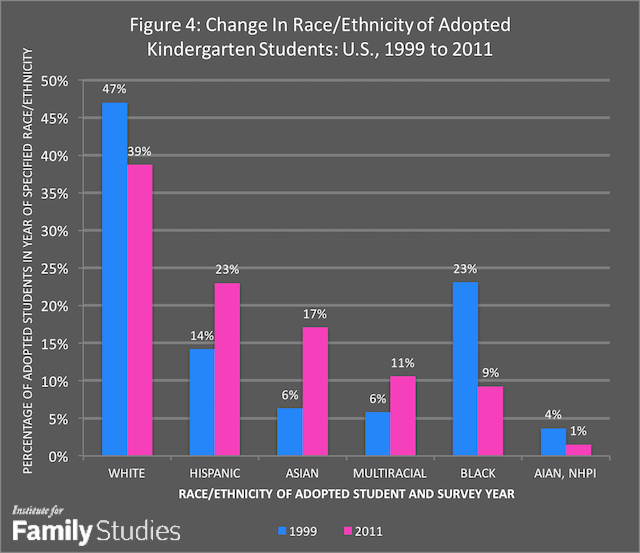 Primarily as a result of foreign adoptions of infants from China and South Korea, Asian adoptees nearly tripled as a fraction of all adopted students, going from 6% of all adopted students in 1999 to 17% in 2011. They moved up from being the fourth to the third largest racial/ethnic group. By comparison, Asian students represented only 4.6% percent of all kindergartners in 2011 and less than half a percent of those who lived with relatives other than their parents or in foster care.

Asian adoptees were also notable in that they were predominantly female, reflecting a side-effect of the one-child policy in China: 70% of adopted Asian kindergartners were girls, compared with 52% of Asian students living with their birth parents, and 48% of all kindergartners in 2011.

In contrast, black adoptees went from making up 23% of all adoptees in 1999 to just 9% in 2011, a 61% decline. They fell from being the second largest group of adoptees (after whites) to the fifth largest. By comparison, 13.5% of all kindergartners in 2011 were African-American.

Although the proportion of adopted kindergarten students who were black declined over time, black children remained overrepresented among kindergartners living with relatives other than their parents, or in foster families. As noted earlier, 25% of those in relative or foster care in 2011 were African-American.

The drop in the proportion of black adoptees may partly be due to the dramatic downward trend in teen pregnancy and birth rates in recent years. These rates were especially high among African-American adolescents.13 Less optimistically, the decline may represent the success of efforts by activists to discourage adoption of African-American children by white couples. It may also reflect child welfare agency practices giving preference to the placement of minority children with relatives, even when the relative is reluctant to take in the child or has only meager financial resources. Some state agencies have even used subsidized relative guardianship without formal adoption as a way of getting around support limits imposed by welfare reform.14

The Face of Adoption is Likely to Continue to Change

The adoption picture in the U.S. is likely to change further in future years. Countries that have served as major sources of adoptable infants are undergoing changes in their natal and adoption policies. For example, China has loosened its “one-child” policy and Russia has banned foreign adoptions to parents from the U.S. International agreements aimed at reducing corruption and exploitation of impoverished families are having unintended consequences, such as cutting off adoptions from some countries and expanding the paperwork, delays, and bureaucratic hurdles that prospective parents must overcome.15

In its current state, adoption helps many childless couples fulfill their parental ambitions and gives many abandoned children the opportunity to be reared in stable, supportive, and financially secure homes. As the data in this research brief shows, adoption is also helping to make the U.S. a more global society, increasing ethnic diversity, and broadening the definition of what it means to be a family. But there are still many children right here in the U.S., such as those in the foster-care system, who might benefit from adoption and are currently being left out of the process. And there are certainly ways in which adoption practices could be improved to better inform and prepare prospective parents to make a lifelong commitment to a child in need of a loving and stable family.

9. Of the national probability sample of 13,527 students for whom family information was available, 227 were living with adoptive parents in the spring of 2011. These sample children represented some 52,000 students, or 1.54 percent of all kindergartners.

10. Black kindergartners made up 25% of those living with relatives or in foster care in 2011, whereas they made up 13.5% of all kindergarten students.

12. Of the national probability sample of 19,173 kindergarten students examined in the Early Childhood Longitudinal Study of the Kindergarten Class of 1998-99, 252 were living with adoptive parents in the spring of 1999. These sample children represented some 48,000 thousand adopted students nationwide, or 1.2 percent of the total U.S. kindergarten enrollment of 3.9 million children.

How to Take Back Your Family’s Christmas