The Black-White Divide in Suspensions: What Is the Role of Family?

Black students are more likely to get in trouble in school and to end up suspended, compared to white students. This racial disparity in school discipline is both a cause and consequence of enduring racial inequality in America. And it is important because it means that black students, especially black boys, are more likely to end up on the wrong track: getting less schooling, heading towards trouble with the criminal justice system, and, later in life, having fewer opportunities in the labor force.1 What has been called the “school-to-prison pipeline” often starts in the principal’s office and ends in prison, with school suspensions increasing the risk that black boys, in particular, end up incarcerated.2

The Government Accountability Office (GAO) has recently spotlighted racial and ethnic disparities in school disciplinary actions, such as being suspended or expelled from school.3 Figure 1 illustrates this racial inequality, showing that in 2016 nearly 24% of black students in U.S. elementary and secondary schools had been suspended at least once, as our new analysis of the National Household Education Survey (NHES) shows.4 By contrast, only a third as many white students (8%) and one-sixth as many Asian students (4%) had been suspended. There was a slight but significant reduction in the overall frequency of suspensions between 2012 and 2016, as Figure 1 indicates, but large differences across racial groups remained.5 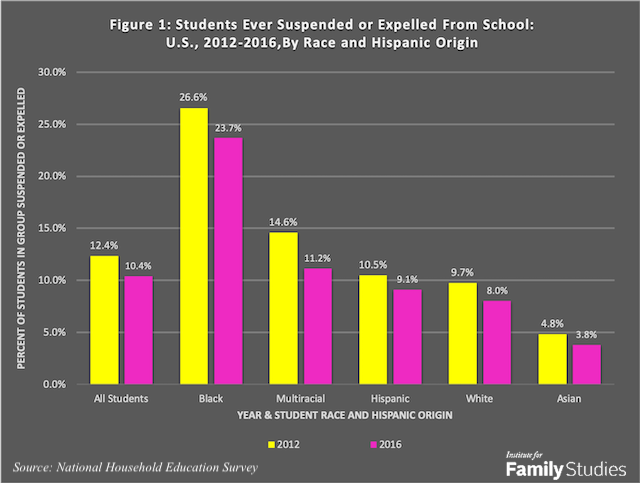 We do not doubt that racial variation in suspensions is partly a consequence of racial prejudice or “implicit bias” on the part of teachers and school administrators. Black students, especially black boys, are more likely to be surveilled and punished for their behavior, even when that behavior is similar to that of white peers who are not disciplined.6 There is also evidence that the racial composition of teachers in schools shapes patterns of school discipline for African American students.7

But there are legitimate reasons for believing that some of the racial differences in school suspensions and discipline are based upon real, not just perceived, differences in students’ behavior.8 We focus here on the possibility that some of these differences are related to family factors, including notable differences in family structure by race. Students who come from chaotic homes, single-parent families, or non-intact families are less likely to get the consistent attention, affection, and discipline they need to flourish and develop self control. Their families typically have less money, which affects the quality of their neighborhoods and their neighborhood peers, which is also an important influence on school conduct. And they are also more likely to be exposed to conflict, stress, frequent moves, and neglect—all risk factors for delinquent and disruptive behavior.9 Indeed, our data indicate that rates of school contact for student misbehavior are nearly twice as high among students living with separated or divorced parents as among those living with stably married parents. And they are higher still among students who live apart from both biological parents, being cared for instead by grandparents or foster parents.10

When it comes to race and family structure, the NHES indicates that black students are far more likely to be living apart from their married birth parents in the home (72%) compared to white students (37%) or Asian students (26%), as shown in figure 2.11 These family structure differences, then, are likely to play a role in inter- and intra-racial disparities in student conduct and discipline. 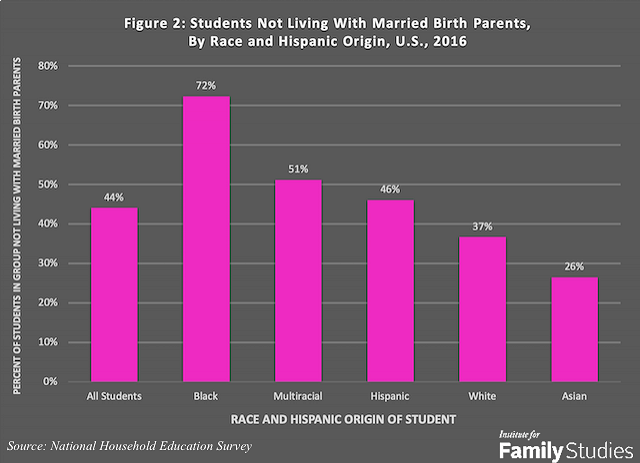 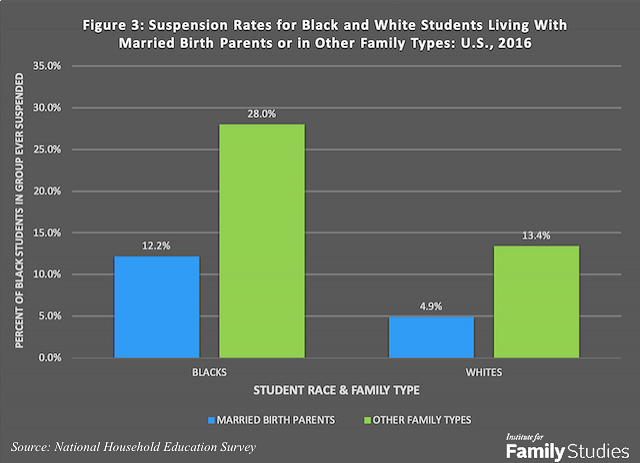 Our results suggest that efforts to bridge the racial divide in school discipline must not only focus on school failures to create a safe and equitable school environment but also on family life. Policymakers must recognize that social and psychological problems in youth may manifest themselves at school but have their origins in family situations over which the school has little or no control. Often, we place too much blame on teachers, administrators, and school policies, overlooking the role that factors outside the school’s control—including the quality and stability of family life—have on children’s in-school conduct.

Accordingly, if we seek to reduce the number and rate of black children being suspended in schools, policymakers, educators, civic leaders, and parents themselves need to go beyond just improving the school climate to finding ways to strengthen and stabilize black family life.14 Such efforts should include criminal justice reform, ending marriage penalties in means-tested policies, subsidizing the wages of low-income workers, and launching local and national campaigns directed by black religious, civic, and cultural leaders to strengthen marriage in the black community.15 Efforts like these are needed because, our research suggests, increasing the number of African American children who are raised by stably married parents would dramatically increase the odds that black girls and boys steer clear of the principal’s office—andincrease the odds they flourish in school, avoid contact with the criminal justice system, and, later in life, excel in the labor force further down the road. While they are no panacea, given the racial bias that still shapes school life in America, stronger black families would go a long way towards reducing racial disparities in school discipline. 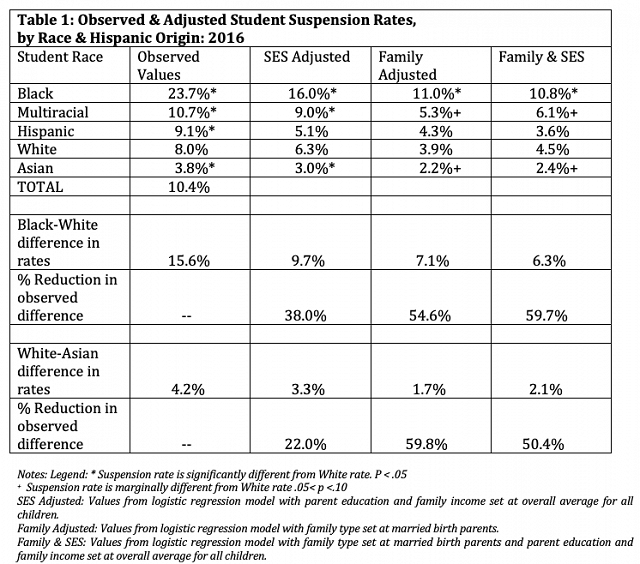 4. The National Household Education Survey (NHES) of 2016 was based on parent reports concerning a national probability sample of 14,075 students in elementary, middle, and high schools across the U.S., including a subsample of homeschooled children. See: https://nces.ed.gov/nhes/about.asp

5. Estimates in the text and Figure One are based on authors’ analysis of public use data from the NHES 2016 and the National Household Education Survey of 2012. The sample for the NHES 2012 was a similar national probability sample of 17,563 students in elementary, middle, and high schools across the U.S. The overall difference in suspension rates across the two surveys is statistically significant, but the changes in rates for each of the racial and ethnic groups are not. In both years, black suspension rates were significantly higher than rates for whites, Hispanics, Asians, and multiracial and other students. In 2012, suspension rates for whites were significantly higher than those for Asians, and significantly lower than those for Hispanics and multiracial students. This was not true in 2016, probably because of smaller racial subsample sizes.