In the 1980s, Taiwan stepped into modernization, which subsequently brought about changes to the family. Since then, family structures have become more diversified and family functions more vulnerable, mainly due to marriage instability. The most notable change in family structure before the 1990s was a shift from the traditional stem and extended family1 to the nuclear family, which consists of only two parents and their children. Additionally, during the 1980s, the absence of a spouse gradually shifted from being mainly due to death to being mainly due to divorce.

The absence of a spouse is conventionally referred to as a single-parent family, if that family includes dependent children (aged under 18) at home. However, a single-parent with young children may live with other relatives, especially his or her parents. The latter in Taiwan can be found in the stem family, where the household head is the mother or father of the single parent. This type of single-parent family is different from the conventional one in that a single-parent may be more likely to receive material and emotional assistances from the family of origin.

In Taiwan, the average woman had seven children in the early 1950s. The TFR dropped to the replacement level of 2.1 children in 1984, and it has declined by one-half since 2010. The TFR has hovered around one in recent years, and there is no sign of it increasing in the near future. The question herein is how did the single-parent family change with the decline in fertility, and what impact did this change have on the single-parent family’s economic well-being and living arrangements?

By using data from the Survey of Family Income and Expenditure (SFIE), 1990-2018 waves, collected annually by the Directorate-General of Budget and Statistics (DGBAS) in Taiwan, we describe the change in family structure and specially focus on conventional single-parent families, as well as single parents in stem families. Second, we calculate poverty rates for overall families and these single-parent families by adopting a poverty line defined as half the median household disposable income adjusted by family size. Third, we examine the poverty rate for the single-parent family with respect to gender, marital status, and living arrangement.

Changes in Single-Parent Households in Taiwan

The proportion of single-parent families has varied over time, but its magnitude still increased until 2010 due to that the number of overall households in Taiwan also increasing during this period. The number increased from 141,000 in 1990 to 234,000 in 2007; however, it started to decline in 2010 and dropped to 136,000 in 2018, the lowest in this period (see Figure 1, the blue area). On the other hand, single-parents in stem families rose from 34,000 in 1990 to 68,000 in 2018 (see Figure 1, the red area). This implies that an increasing number of single-parents moved back to their families of origin in order to receive assistance from their parents, particularly during the most recent decade. As shown in Figure 1, the total number of single-parent families has declined since 2010, which might be due to the decline in fertility rates in the new century. 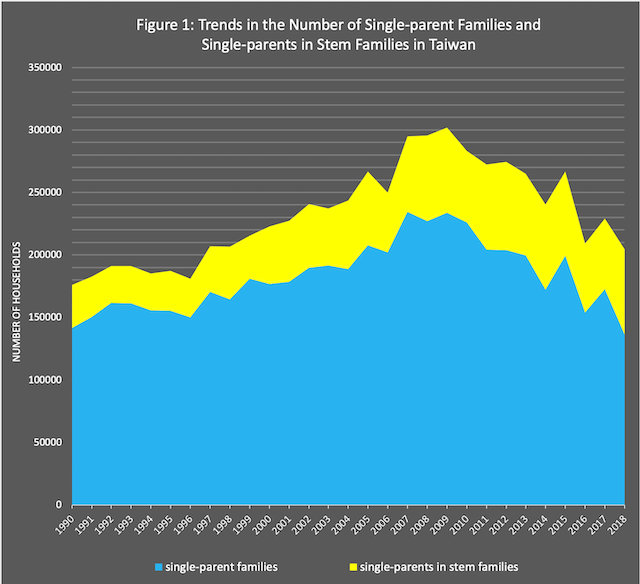 Due to the limitation of the SFIE data information, we could only identify the gender and marital status of conventional single-parents, but not those in stem families because they are not household heads. Among conventional single-parent families, the single-mother family constituted a share of 61% in 1990, increasing to 70% in the first decade of the new century, but decreasing to 65% in 2018. By examining the marital status of these single-parents, we found that the divorced account for 35.4% of single-parents, followed by the widowed (31.3%), the separated (17.2%), and the unmarried (16.1%) in 1990. From then on, the fraction of divorced parents increased over time, while the others declined. In 2014, the proportions were 67.2%, 19.9%, 9.6% and 3.4%, respectively (see Figure 2).2 The increase in the share of divorced single-parents echoes the trend of divorce rates, which began to rise and even accelerated in the mid-1990s in Taiwan. 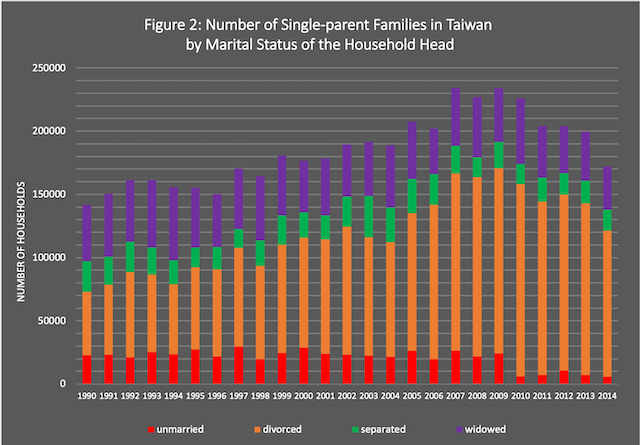 The Poverty of Single-Parent Families

Overall, the poverty rate among all households in Taiwan did not change much from 1990 to 2018 (See Figure 3). The lowest rate was 7.3% in 1999, and the highest at 10.4% in 2009 during the global financial crisis. In contrast, the poverty rate for single-parent families remained relatively high and the trend was uneven over time.3 Single-mother families were poorer than single-father families in most years of the period; however, the differences between them seems to blur after 2004 (see Figure 4). 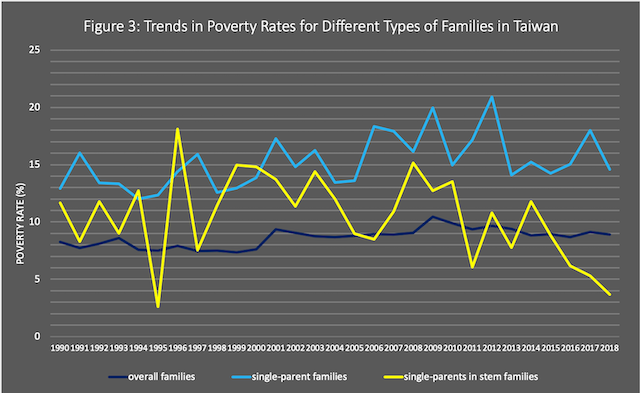 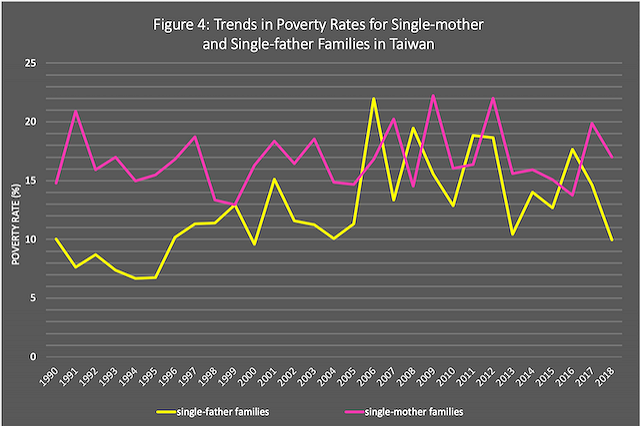 Most importantly, a sizeable number of single-parents were living in stem families and this seemed to rise in proportion over time, even when conventional single-parent families began to decline in 2010. We also found that the economic situation of these families is relatively better than conventional single-parent families. To some extent, the stem family seems to provide shelter, economic assistance, and child care for adult children who experienced family dissolution or life-event incidents.

1. The stem family is defined here as a family consisting of direct blood lineages, usually three generations. An extended family consists of additional members, such as indirect lineage relatives or non-relatives, and it is grouped into "others" by SFIE.

2. The DGBAS has not released the marriage status of household heads since 2015.

3. The variation over time was partly due to the small sample size.

4. The child-care subsidy program included grandparents as child caregivers in 2012 in Taiwan.