Black children in the United States enjoy less family stability than white children, experiencing close to twice as many family transitions—union dissolutions and partnership formations—as white children. Family instability is associated with a host of negative outcomes ranging from asthma to obesity, and from teen pregnancy to substance abuse. It is also negatively linked with fundamental predictors of success in adult life like educational attainment. For these reasons, black children’s family instability is an important part of the U.S. stratification story.

While low marriage rates among blacks can explain some of the family stability disadvantage that accrues to black children, a much more complete picture emerges from a study published in the Journal of Family and Economic Issues this month. The authors, Gerald Eric Daniels Jr., Venoo Kakar, and Anoshua Chaudhuri, estimate the chance that a woman who bears a child outside of marriage will marry the baby’s father within nine years. With 40% of births in U.S. occurring outside of marriage, this is an important question. Cohabitation has become common enough that despite its high dissolution rates, most long-term unions in the U.S. begin as cohabitations. While some of these convert to marriages before a child arrives, many others do not. In other words, we can’t know a child’s chances of growing up with both biological parents from partnership context at birth alone; we also need information on what happens after birth. Daniels and his colleagues found that cohabitation patterns helped explain the racial gap in the transition to marriage after a birth.

The essence of their argument can be grasped by contrasting the distribution of births between blacks and whites. Most previous work has focused on the blue slice of the pies in the figure below: 30% of black women are married at the time of childbirth, compared to 64% of white women. 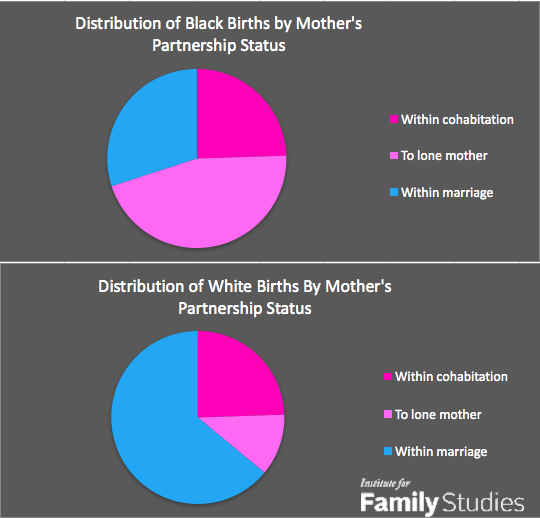 Both the lighter and darker pink pie slices represent nonmarital births, and the authors draw our attention to the huge racial difference in how likely it is that an unmarried mother is in a cohabiting relationship, rather than being a lone mother. White women are about twice as likely to give birth within marriage than black women, and, if unmarried, are about twice as likely to be partnered as unmarried black women. So, there is no black/white racial gap in the share of all births in cohabitation (shaded in dark pink), but there is close to a four-fold difference in the share of births to lone mothers: 46% versus 12% (lighter pink).

The authors found that about 17% of black women with nonmarital births married their child’s father within nine years, versus 37% for both white and Hispanic women. In other words, the high nonmarital birth rate among black women coexists with low rates of subsequent marriage to the child’s father, a combination that adds up to a lot of black children not living full time with their biological fathers. Think of it this way: For blacks, if you add 17% of the pink share of the pie to the 30% blue slice, you have 42% of children whose mom is married to their dad at some time before their ninth birthday; for whites, adding 37% of the pink share to the 64% blue slice yields 77%. Thus, what happens after birth amplifies the advantage associated with having a greater share of marital births.

Children have a better chance of growing up with both parents if they start out that way.

The reason is simple: Children have a better chance of growing up with both parents if they start out that way, and a greater share of white women having nonmarital births are in cohabiting relationships (rather than being lone mothers). Even though children born to cohabiting parents see their parents split before their ninth birthday three times as often as children born to married parents do, they still have a decided advantage over children born to lone mothers: over 70% of them still live with both parents at age nine. When women who give birth outside a residential partnership later marry, they are much less likely to be marrying their child’s father. That makes sense because couples planning to raise a child together probably at least move in together during pregnancy, and those who have not made that transition by the time the baby arrives are more likely to be harboring doubts about the viability of the partnership.

Daniels and his colleagues concluded that the lower post-birth marriage rates among blacks could be explained by the lower pre-birth cohabitation rates among unmarried parents. They came close to suggesting that if black women cohabited at higher rates, part of the racial gap in children’s family stability would be closed. But they were too careful to do this because they also found that post-birth cohabitation with a different man dramatically reduced the odds of marrying the child’s biological father (hardly surprising).

I appreciated their attention to dynamics that affect children’s experience of living with both parents, but I was not convinced that in the end, we knew much more about the racial gap. Their analysis also showed that a shortage of marriageable black men (marriageability is eliminated by mortality, tremendously reduced by incarceration, and compromised by underemployment/unemployment) explained the racial gap in post-birth marriage, as did racial differences in attitudes among unmarried parents (e.g., higher levels of gender distrust among blacks). Therefore, it seems to me that when they concluded that cohabitation patterns were an important part of the story, they hadn’t taken seriously enough the idea that the same factors that dampen black marriage rates also dampen cohabitation rates—that unwed black mothers do not move in with their child’s father for many of the same reasons that they do not marry him.

Laurie DeRose is a Research Assistant Professor with the Maryland Population Research Center at the University of Maryland at College Park, where she has served since its inception in 2001. She is also Director of Research for the World Family Map project.