Predicting Infidelity: An Updated Look at Who Is Most Likely to Cheat in America

by Jeffrey Dew
Back to Blog

Every few months, the American public is treated to the latest spectacle of public figures caught cheating on a spouse—the latest scandals include Jerry Falwell Jr.’s wife and a pool attendant, and NBC Universal executive Ron Meyer. Despite the regularity of these revelations, public interest in the cheating behaviors of the rich and famous continues to sell and to sell well.

Even scholarly work benefits from the notion that “sex sells.” For example, a January 2018 research brief by IFS research director Wendy Wang, “Who Cheats More? The Demographics of Infidelity in America,” continues to be the most-read IFS blog of all time, with over 7 million page views to date.

The following analysis compliments Dr. Wang’s work with national data collected in late 2019 by the survey research group YouGov—the iFidelity Survey.1 It examines 1,282 ever-married individuals using both demographic, attitudinal, and relational predictors of extramarital affairs. Different from previous research, however, this new analysis defines extramarital affair as a “married individual having engaged in physical sexual activity with someone other than their spouse, and without their spouses’ knowledge and consent.” While this is a stricter definition of cheating than used previously, the overall pattern is largely consistent with findings from previous studies. 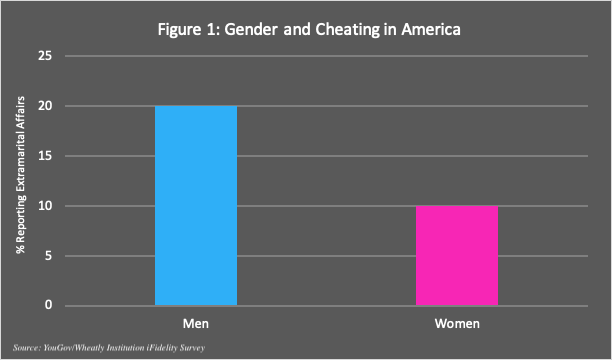 Although these gender differences are certainly important, other demographic characteristics are related to self-reported infidelity as well. As shown in Figure 2, non-Hispanic White participants were less likely to report extramarital affairs than other participants. Less-educated individuals also reported more affairs while those who had a four-year college degree or higher reported less. However, age, political affiliation, and income were not associated with self-reported infidelity. 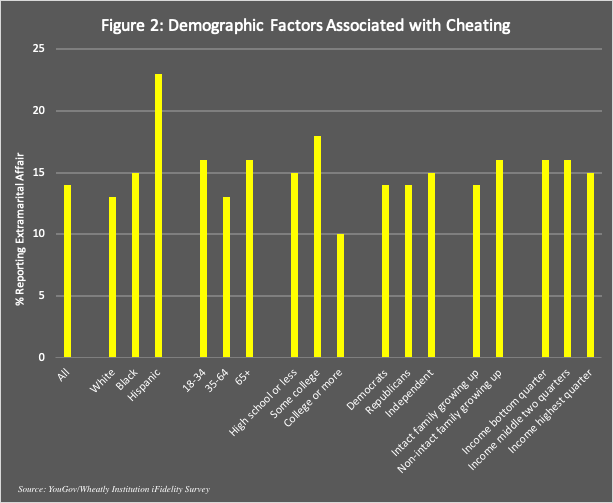 This analysis went further than Dr. Wang’s research brief to explore how attitudes and relationship quality are associated with having an extramarital affair. Figures 3a and 3b show these associations. If a participant in the iFidelity survey reported having been cheated on by a spouse in the past, they were also more likely to self-report an extramarital affair. When we asked participants what behaviors they felt represented cheating, 70% labeled six behaviors of the nine behaviors presented as “cheating,” and 30% rated seven or more of the behaviors as cheating. Participants who labeled more than six behaviors as cheating were less likely to report extramarital affairs, relative to their more lenient counterparts. Reporting being “very satisfied” in the relationship and perceiving a relationship as “very stable” were also both associated with lower levels of extra marital affairs. 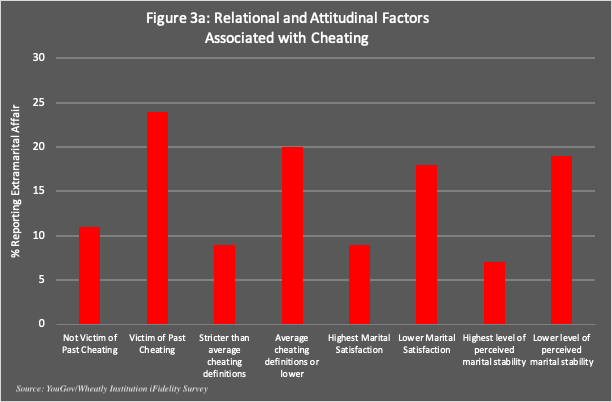 Finally, the personal importance of religion was related to lower levels of cheating, whereas religious worship service attendance was not. 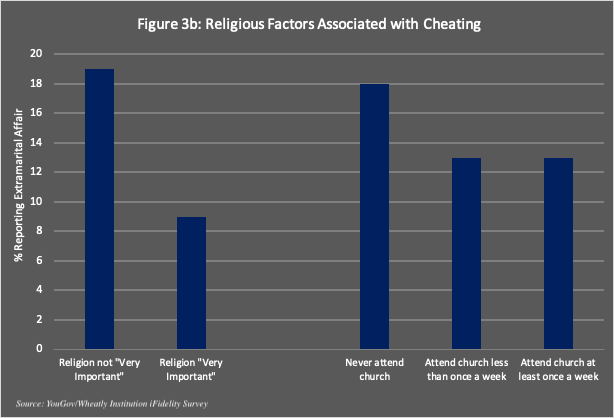 These findings suggest that both demographic, attitudinal, and relational variables are associated with extramarital affairs. Among the variables that individuals can control, adopting a stricter than average definition of cheating, being in a stable relationship, and the personal importance of religion are all related to lower likelihoods of cheating on one’s spouse.

Jeffrey Dew is an associate professor in the School of Family Life at Brigham Young University, a fellow at the National Marriage Project and a fellow of the Wheatley Institution.

2. The question asked participants if they had ever cheated on a spouse given the definition above.  For participants who were married at the time of the survey, we do not know if they are reporting having cheated on a previous spouse or their current spouse.