To what extent is social mobility a function of place, as opposed to people? In other words, can you improve a poor child’s life by moving his family to a better place? Or will that family just bring its disadvantages along for the ride?

Superstar economist Raj Chetty, working with assorted coauthors through his Equality of Opportunity Project, has gone all-in on the “place” theory. In a series of studies over the past few years, he’s produced empirical evidence that social environments matter. But a new paper by a trio of Chicago-based economists (Ryan Gallagher, Robert Kaestner, and Joseph Persky) challenges that view, advancing a “people”-based explanation for Chetty’s own data.

First, let’s briefly review Chetty’s work. In 2014, using highly sensitive tax-return data the IRS made specially available to him, he looked at kids whose parents were at the 25th percentile of income nationwide, producing estimates for each commuting zone and county as to how socially mobile those kids were. This study said relatively little about what these differences might mean, though it did note that levels of single parenthood, segregation, inequality, etc., correlated with decreased upward mobility.

A 2016 paper went a step further. It focused on families that moved, and showed that the longer kids lived in their new neighborhoods before adulthood, the more their outcomes matched those of their new peers. Chetty estimated that “at least 50% of the variation in intergenerational mobility across the U.S. reflects the causal effects of childhood exposure.”

Okay, one might say. Parents who move are usually taking advantage of new job opportunities and the like, and the benefits trickle down to their kids. This doesn’t mean that we’ll see the same benefits if we start a government program to grab poor families at random and plop them down in richer areas.

But wait, there’s more! The study also deployed another “quasi-experimental” method, looking at “displacement shocks” in which people were abruptly forced to move (such as Hurricane Katrina), finding the same thing.

Furthermore, the Moving to Opportunity (MTO) project was set up as a true experiment, indeed, randomly offering poor families a voucher to help them move to a nicer area. Early studies showed it to be more or less a flop, with little to no effect on kids’ school performance or their parents’ economic success. But when Chetty got hold of it and looked up the kids (now adults) in his tax data, he found that the kids who’d relocated made almost $3,500 a year more and were more likely to attend college—so long as they’d moved before the age of 13. After that point, moving was, if anything, harmful.

I won’t lie about my biases: My own instincts favor “people” explanations over “place” ones, and I’m skeptical of any study based on data that hardly anyone but the authors is allowed to see. So I was primed to relish this new paper. But I ended up skeptical of it, too.

As I mentioned above, Chetty’s 2014 paper did report that areas’ mobility rates correlated with the characteristics of the families that lived in those areas, such as rates of single parenthood. The new study is basically a deeper dive into the concept of measuring how high- and low-mobility areas differ. Where Chetty looked at families at the 25th percentile of the nationwide income distribution, the new study uses the whole third decile (from the 20th percentile to the 30th), because they have to rely on a smaller data set from the Census.

The authors’ results on race are especially striking. The areas that Chetty says are best for mobility in the 2014 study are only 4% black, while the worst areas for mobility are 36% black (again, looking only at families in the third decile of income nationally). Gallagher et al. remark:

Alone, this striking nine-fold difference in racial composition suggests that spatial differences in AIIM [a measure of mobility] may be as much, if not more, about the characteristics of the low-income families themselves and their individual burdens, as it is about the actual places within which they reside.

Families in less upwardly-mobile areas also are less likely to include married parents and more likely to have adults with lower educational credentials, etc. 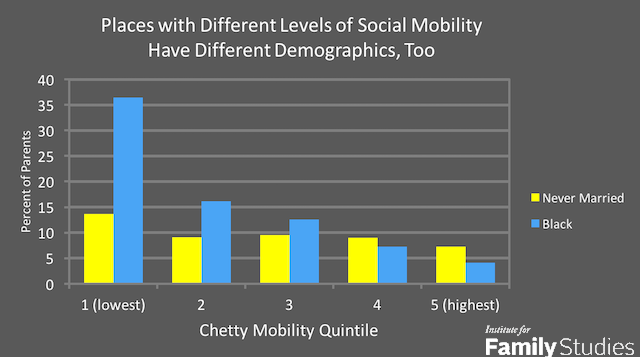 Then, the authors calculate the relationship between traits like these and economic mobility. (Again resorting to a data set much smaller than that available to Chetty, they use the National Longitudinal Survey of Youth for this purpose, and this time, they look at parents from the entire lower half of the national income distribution.) They use the results to simulate mobility rates for the geographic areas they study. In other words, they look at the demographic mix of each area and ask: Based just on the demographics, how much mobility would we expect this population to have?

These simulated rates, based purely on readily measurable family characteristics — “people differences,” as opposed to “place differences” — seem to explain most of the area-to-area variation in social mobility that Chetty documented. “It seems reasonable to conclude that differences between places in intergenerational mobility would be even further reduced, perhaps to zero, with the addition of more family characteristics,” the authors add.

These results are interesting, but they raise some questions.

For one thing, how are we sure that these “people differences” aren’t really “place differences” at root? For example, kids in single-parent families have lower upward mobility, and that lower mobility factors into the authors’ simulations. But there’s no way to tell how much of the lower mobility results from the fact that these kids tend to live around other disadvantaged kids, as opposed to being a direct result of growing up with a single parent. This point holds especially for race, as even middle-income blacks live in much poorer neighborhoods than middle-income whites do.

In setting up their analysis, the authors themselves write that families’ characteristics might determine mobility “either directly or through their influence on an area’s institutional characteristics” (emphasis added). I would argue that this gives the entire game away—that areas’ “institutional characteristics” are a “place difference,” a reason that a given family, with given traits, might be better off in one place than another. The flipside, of course, is that if strong institutions depend on certain demographics, which is to say the presence of certain people, there’s a limit to how many disadvantaged families we can move into an area before we undermine the institutions themselves. So a lot hinges on the semantics here.

And what about Chetty’s one-two-three causal punch—his findings on siblings, displacement shocks, and the Moving to Opportunity experiment? They show compellingly that the same kids will fare differently in different places, a conclusion that Gallagher et al. don’t reject but cast some doubt on.

Regarding the study of movers based on IRS data, the authors point out that people who move are different from people who stay in place, and thus the results may not be applicable to non-movers. (This is the “external validity” critique.) They make the same point regarding MTO in a footnote: “external validity of the findings may again be an issue, as the experiment was conducted in only a few cities, only 40-48% of the children in ‘winning’ families actually took up the offered vouchers for moving to better neighborhoods, and movers were different from non-movers.”

And yet . . . if place seems to have an effect among (A) siblings within families that move of their own volition, (B) kids in families forced to move by “displacement shocks,” and (C) kids of poor parents who are randomly selected to receive a voucher and choose to take it, the argument that other kids might not see the same benefits starts to wear thin, no? Indeed, one study suggests that the MTO study might understate the potential value of relocation because the kids who’d benefit most from moving are the least likely to have parents who seek out the opportunity to participate in such programs.

Basically, at this point, Chetty has fully developed his argument that place matters, sanded down the rough edges, wrapped it up, and topped it with a pretty bow made of fabric woven from the entire country’s tax returns. So it’s nice to see someone take a swing at it, even if the blow doesn’t land squarely.

But what I would really like to see is for someone who’s naturally skeptical of Chetty’s results, with top-of-the-line statistical chops and an impeccable reputation for academic integrity, to get a crack at his data sets, especially the IRS records. Only then will we know if Chetty’s findings are simply the story the data tell or just one of many ways to spin the numbers.

— Robert VerBruggen is a deputy managing editor of National Review.

1. "All values are based on family-level observations (N = 118,857) provided by the U.S. Census’ 1990 PUMS file (5% sample). This sample is restricted to families with own children between the ages of 0-12 who have incomes within the 3rd decile of the national income distribution. The characteristics assigned to each family are based on those of the mother, if present, or those of the father if the mother is not present. Families with no mother or father present are omitted from the sample as are families with multiple mothers or fathers present. All values are calculated using sample weights. A family’s absolute upward mobility quintile is determined by assigning it to one of 897 counties or 'super' counties."