by Brienna Perelli-Harris
Back to Blog

The Covid-19 crisis has strengthened parent-child relationships in the United Kingdom. About a quarter of parents reported in a recent survey that their relationship with their children had become better since the UK government’s stay-at-home policy. Less than 5% reported it had become worse. 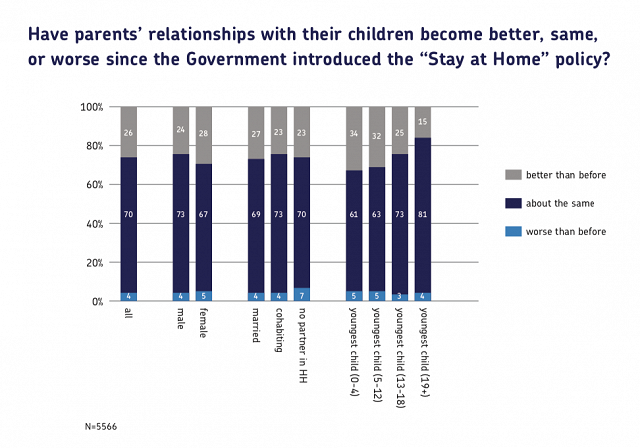 These results are based on parents surveyed in the Understanding Society May COVID-19 survey, a nationally representative study that collected data from 5500 parents in the UK.1

I led the study, along with Sandra Walzenbach from the University of Essex.

Many recent studies have pointed out the increasing economic and caring burden for women; for example, our April COVID-19 survey indicated that, on average, mothers spend nine more hours doing childcare and home schooling per week than fathers.

However, there are hidden gains. Nearly one-third of women appear to be benefiting from the UK lockdown as a time to become closer to their children. Only 5% reported their relationships had become worse. It seems that, despite the unequal pressures of home schooling and housework, slightly more mothers than fathers reported an improvement in their relationships. 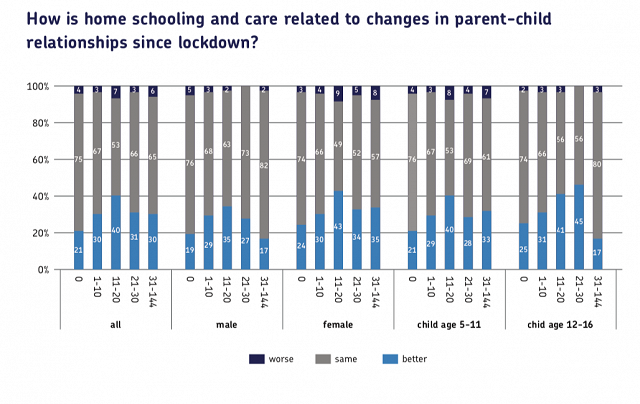 The UK survey also showed that:

While the survey indicates that working from home and having the time to home school seems to improve parent-child relationships, it is important to note that those who can work from home most likely already have higher incomes and education.

But overall, the differences by socio-economic status are minor, with nearly a third of those in deprived circumstances still reporting that their relationships had improved recently. And keep in mind that 97% of parents in Britain say that they have a close or very close relationship with their children. Very few say that they are not at all close to their children.

Some groups did appear to suffer more due to the lockdown. The April survey indicated that lone parents have experienced particularly severe declines in household earnings and have been falling behind on bills. These stressors may be impacting relationships. Fewer lone parents say they talk to their children about important matters. However, they are also less likely to quarrel with their children, possibly because they have fewer interactions with them.

While this survey is based on a nationally representative sampling framework, it may still have missed the most disadvantaged who have suffered the most. For example, there is insufficient data on men who have experienced hardship to be able to say whether their relationships have become better or worse. Those in the worse circumstances most likely did not answer the survey at all.

Thus, while lockdown seems to have strengthened relationships in most families, it is worth taking note of the difficulties faced by certain groups. If lockdown measures are to be reintroduced in further waves of the pandemic, then government should be considering ways to provide extra support for those suffering the worst effects of the crisis.

Brienna Perelli-Harris is Professor of Demography at the University of Southampton in the United Kingdom. For more information on this study, please see the Centre for Population Change policy brief.

1. The Understanding Society COVID-19 study is a monthly survey on the experiences and reactions of the UK population to the COVID-19 pandemic, funded by the ESRC and the Health Foundation. The second wave was carried out online between 27 May and 2 June. All Understanding Society adult sample members aged 16+ were invited to participate, and 14,607 completed the survey in the second wave. There were over 5,500 parents who answered questions on family life and whose data fed into the figures in this press release. The Health Foundation is an independent charity committed to bringing about better health and health care for people in the UK. The COVID-19 survey data is available to researchers via the UK Data Service.