Obama Gets It Right, When It Comes to Fatherhood

by W. Bradford Wilcox, @BradWilcoxIFS Linda Malone-Colon
Back to Blog

“From the White House on down, the myth holds that fatherhood is the great antidote to all that ails black people… In 2011, Philadelphia Mayor Michael Nutter, responding to violence among young black males, put the blame on the family: ‘Too many men making too many babies they don’t want to take care of, and then we end up dealing with your children.’ … The thread is as old as black politics itself. It is also wrong. The kind of trenchant racism to which black people have persistently been subjected can never be defeated by making its victims more respectable.” –Ta-Nehisi Coates, The Atlantic

“Of all the rocks upon which we build our lives, we are reminded today that family is the most important. And we are called to recognize and honor how critical every father is to that foundation… But if we are honest with ourselves, we’ll admit that what too many fathers also are is missing—missing from too many lives and too many homes… You and I know how true this is in the African-American community. We know that more than half of all black children live in single-parent households, a number that has doubled—doubled—since we were children… And the foundations of our community are weaker because of it.” –Barack Obama

When it comes to race, one of the most gifted writers on the contemporary American scene is Ta-Nehisi Coates. His most recent Atlantic cover story on reparations is a tour de force, chronicling the poisonous legacy of slavery, Jim Crow, and contemporary racial segregation for generations of African Americans, past and present.

Coates is right about much when it comes to race in America, but he’s off the mark about one thing: black fathers. Like a number of progressive writers, he downplays the importance of father-present homes for the welfare of African Americans in this cover story. On this subject, Barack Obama, not Ta-Nehisi Coates, gets it right.

In a 2008 Father’s Day speech, then-Senator Obama observed, correctly, that fathers are “critical” to the family, and that the foundations of the African American community are more fragile than they might otherwise be because many black children are growing up in a home without their own father. Obama’s words are consistent with the general tenor of the research on fatherhood in the United States, which suggests that dads play an important role in increasing the odds that children thrive—emotionally, socially, and economically—across the nation.

But does this research specifically apply to the experiences of African American children? Data from the National Longitudinal Study of Adolescent Health (Add Health) indicate, not surprisingly, that dads matter for African American boys and girls. Take, for instance, teenage pregnancy among black and white adolescent girls. The figure below indicates that African American girls are less likely to end up pregnant as teens if they are raised in an intact home with both of their biological parents, rather than a home headed by a single mother, and this difference is robust to controls for maternal education, household income, and region. 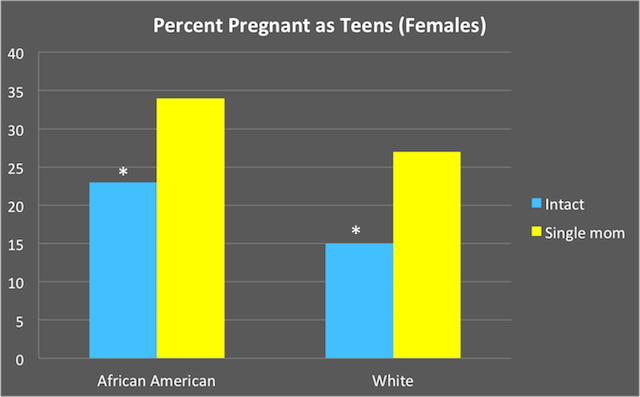 Likewise, black boys who grow up in an intact home headed by their biological parents are less likely to end up delinquent than their peers growing up in a home without a father. Indeed, the figure below indicates that the father-present/father-absent gap in African American boys’ delinquency is statistically significant even after controlling for socioeconomic factors. 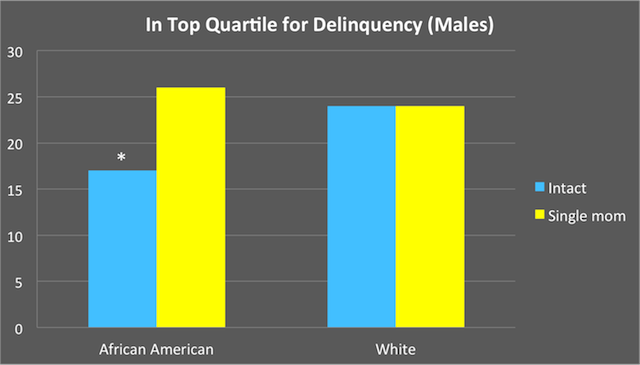 Finally, when it comes to accessing one key ticket to the American Dream, a college degree, the figure below indicates that family structure clearly is linked to college graduation. Young African American men and women are significantly more likely to graduate from college if they hail from an intact biological family, compared to single-mother homes. 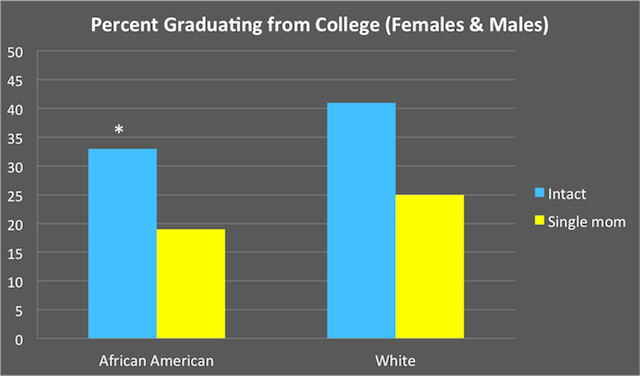 The bottom line: Obama was right to say that African American dads matter; clearly, blacks boys and girls are more likely to flourish when they are raised in a home with their biological parents. To make this point is not to minimize the poisonous legacy of slavery, Jim Crow, and ongoing racial segregation on the black family today, or the ways in which racism and poverty have contributed to family fragility in the black community. But if the nation is committed to boosting the fortunes of black children, and bridging the racial divide in child well-being, it is our considered conclusion, as family scholars, that we need to strengthen marriage and fatherhood in the black community.

As Obama noted in his 2008 Father’s Day speech, to address the challenges facing our nation, we need to strengthen schools, improve the job prospects of our least advantaged citizens, and expand programs targeting vulnerable youth. “But,” in his words, “we also need families to raise our children. We need fathers to realize that responsibility does not end at conception. We need them to realize that what makes you a man is not the ability to have a child—it’s the courage to raise one.”

Dr. W. Bradford Wilcox is a Senior Fellow at the Institute for Family Studies, Director of the National Marriage Project at the University of Virginia, and a Visiting Scholar at the American Enterprise Institute. Dr. Linda Malone-Colón is a Clinical and Personality Psychologist, tenured Associate Professor and Chair of the Department of Psychology at Hampton University. She is also a noted scholar, national speaker, and consultant on African American family relationships.

The figures in this post have been updated since publication to correct an error.