In Europe, Cohabitation is Stable, Right?

by W. Bradford Wilcox, @BradWilcoxIFS Laurie DeRose
Back to Blog

What matters for the well-being of children is family stability, rather than marriage per se. This is the view of some scholars today. They note that children who see the end of their parents’ relationship and additional partners coming in and out of the home are more likely to act up in school, end up pregnant as teenagers, and be delinquent. The damage caused by instability has been described by many scholars of all political inclinations, including Wendy Manning and Andrew Cherlin.

It is easy to see why some conclude that marriage per se does not matter. But here’s the thing: marriage is itself strongly associated with family stability. U.S. children born to cohabiting parents are twice as likely to see their parents’ relationship end compared to children born to married parents: 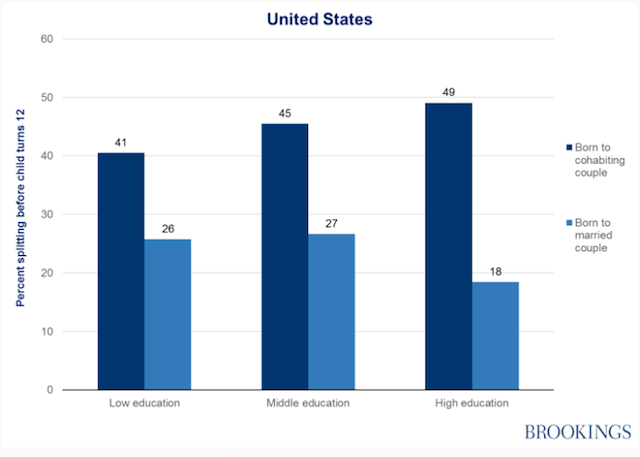 Our new report from the Social Trends Institute and the Institute for Family Studies, The Cohabitation-Go-Round: Cohabitation and Family Instability Across the Globe, shows that the “stability premium” associated with marriage holds even among highly educated families. Almost half of cohabiting college-educated mothers will break up with their partner before their child turns 12, compared to less than one-fifth of mothers who were married when the child was born.

The marriage-stability connection is pretty clear in the U.S. But there is a prevailing view that the story is different in Europe. Indeed, Cherlin’s own work on family instability suggests that cohabitation and marriage are functional equivalents in Scandinavia and France, where he suggests there “are many long-term cohabiting parents who maintain families that are little different from lasting marriages.”

But it turns out that even in Europe, cohabitation is markedly less stable for children than marriage. Analyzing data from 16 countries across Europe, we find that children born to cohabiting couples are about 90 percent more likely to see their parents break up by the time they turn 12, compared to children born to married parents.

In France, for instance, children are about 66 percent more likely to see their parents break up if they are born to a cohabiting couple. The gap is again visible even for highly educated couples: 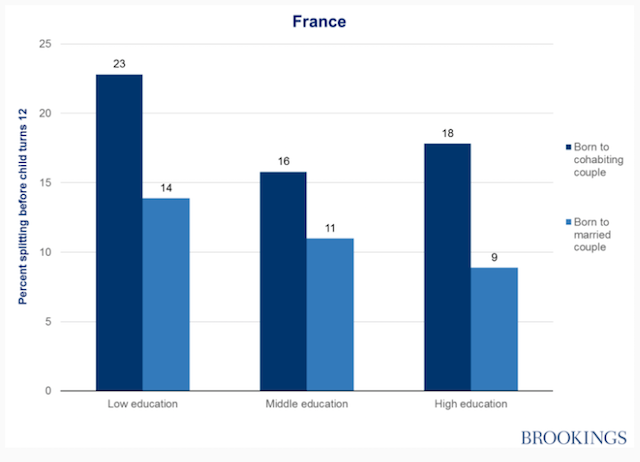 Continue reading at The Brookings Institution . . .