by W. Bradford Wilcox, @BradWilcoxIFS Jeffrey Dew
Back to Blog

Has the rise of screen culture—smartphones, gaming, and tablets—hurt relationships? It’s an important question as research shows that the current cohort of young adults (i.e., Millenials and iGen) are dating less, marrying less, and having sex less than older cohorts did when they were the same age. These studies, which have focused on unmarried individuals, have speculated that these relationship trends are due—in part—to the contemporary experience of omnipresent interactive technology.

But how does screen culture influence relationship quality among cohabiting and married individuals? And is it a matter of how much time people spend on virtual reality or what they do on screens that matters for their relationships in the real world?

To answer these questions and more, we turned to new data, the “iFidelity Survey,” sponsored by The Wheatley Institution and the National Marriage Project and collected by YouGov in late-December 2018. The survey consisted of a nationally-representative sample of 2,000 adults. For this analysis, we focus on the cohabiting and married participants (1,159 individuals).

With this in mind, one of the questions we asked iFidelity participants was how much time they spent online when they weren’t at work. The answers ranged from no time at all (3% of the sample) to nine hours or more (slightly over 9% of the sample). The average was about 3.44 hours per day.

Although the “how much” question did not yield results, we also examined the “how you use technology” question, focusing on three activities: pornography, playing online video games (i.e., gaming), and the use of social media, as these are frequently cited as potential relationship problems. We found that two of these activities were related to negative relationship quality for married and cohabiting men but not women. 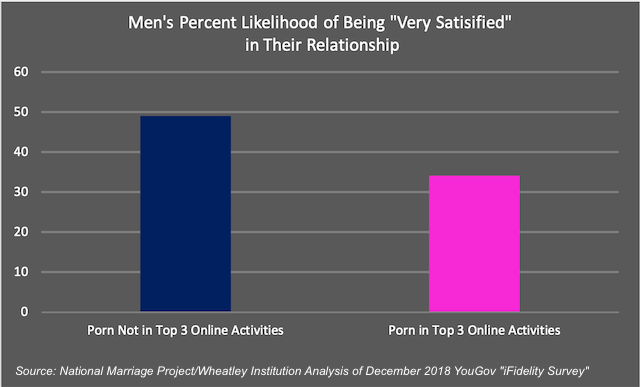 Notes: Logistic regression model with education, age, & marital status controlled.  Assumptions for the
predicted likelihoods are a man with "some college/associates degree," who is32 and married. 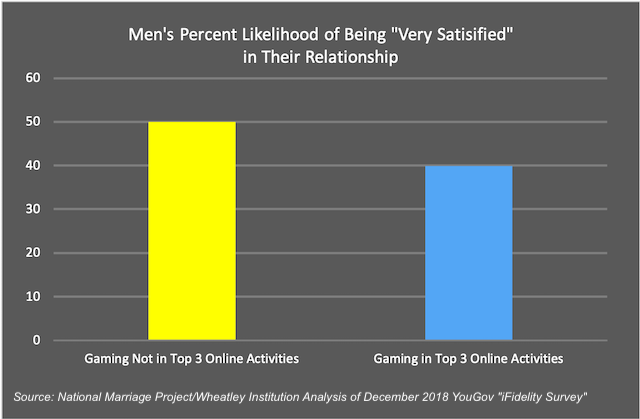 Notes: Logistic regression model with education, age, & marital status controlled.  Assumptions for the
predicted likelihoods are a man with "some college/associates degree," who is32 and married.

Furthermore, our measure of online pornography and video game use is admittedly rough.  Instead of just noting whether they were in men’s top three online activities, frequency data on each activity would have been a more precise measurement. Additionally, while the finding regarding online pornography use and relationship quality is consistent with many other studies (see here and here, for example), the online gaming finding needs replication.

*The authors would like to thank Dr. Brian Willoughby for his input on our findings.