by Andrea Mrozek, @mrozekandrea Peter Jon Mitchell
Back to Blog

In early August, Statistics Canada released new Canadian census data about families. We parsed that data in a report placing Canadian statistics in historical and international comparison. In some ways, the Canadian family is quite stable. Yet in one critical way—our rising cohabitation rates, particularly in Quebec—it’s not. As readers of this blog know well, cohabitation is a markedly less stable family form when contrasted with marriage. Therefore, we can say that on the whole, Canadian family stats are heading in the wrong direction.

First, some generalities: Seven in 10 Canadian children are being raised by their own parents, whether biological or adoptive, and lone parenting has stabilized. About 19% of children lived with a lone parent in the last census in 2011, and this remains the same in 2016. Given that children raised by their own parents is a social good, these stats are slightly better than those in the United States.

However, cohabitation continues a long upward trend in Canada. In 2001, 16.4% of all couples were living together, increasing to 21% by 2016, as the figure below indicates. 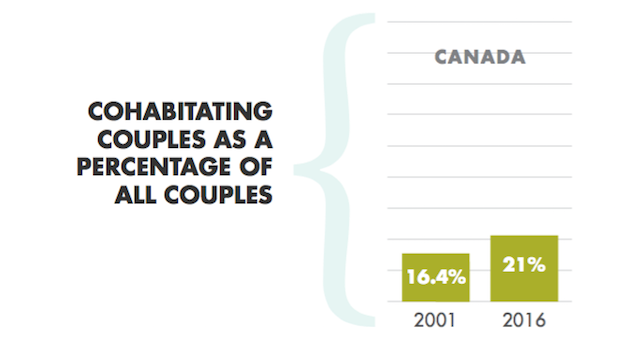 Quebec has one of the highest rates of cohabitation in the world. The reasons for this are varied, but a significant factor is the legacy of the Quiet Revolution, a cultural shift away from the province’s Roman Catholic roots, starting in the 1960s. During this time, Quebeckers gave up on norms associated with Catholicism, including marriage. As a result, many social statistics differ dramatically from the rest of Canada in Quebec.

Research shows a normalization of cohabitation in Quebec. However, marriage still remains a more stable family form, even there. Statistics Canada examined the portion of children living in lone-parent, step-parent, and non-parent families. They observed the portion of children in these families at age four and under and children ages 10 to 14. Quebec had the largest increase in children moving from an intact family into a lone parent, step-parent, or non-parent home. The gap between the younger and older cohorts in Quebec was 19.2 percentage points. The Canadian national average gap was only 12.7 percentage points. The agency speculates that this “may be related to higher instability among common‑law unions, which are more popular in Quebec than elsewhere in Canada (except in Nunavut), rather than the result of more children born to lone parents.”

In spite of recognizing that cohabitation leads to higher instability, it recently became a more difficult to get the numbers of those marrying versus those living together in Canada. Statistics Canada began tracking cohabitation in the 1981 census, yet in reporting the 2016 findings, the national statistical agency combined cohabiting and married couples for many categories. In some cases, the agency chose to report on intact families rather than noting the marital status of those unions. For the first time in decades, Statistics Canada chose not to report the percentage of Census families that are married couples. As a result, drawing historical and international comparatives are more difficult.

Comparatively, the United States has lower rates of cohabitation than Canada. In 2011, for example, 11.3% of US families were cohabiting families, compared to 16.7% of Canadian families (see figure below). 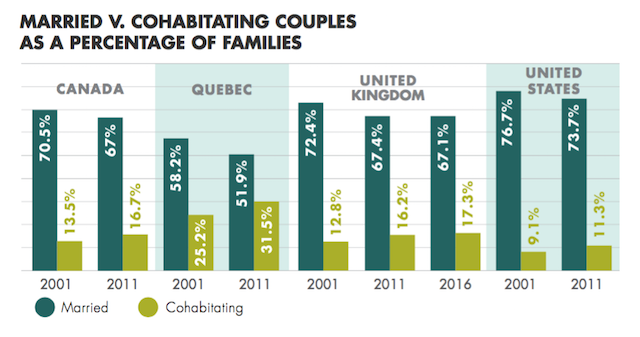 On the other hand, rates of non-marital childbearing are much higher in the US. In 2011, 40.7% of children in the U.S. were born outside of marriage, compared to 30.2% in Canada.

All told, the western world is witnessing family changes that bear watching closely. Given the historical ties and friendly relationship between the United States and Canada, it’s worth noting the direction of your neighbors to the north. The institution of marriage needs reviving both north and south of the border. This is one of our key recommendations—and as any scholar of marriage will attest—it is more easily said than done.

Andrea Mrozek is Program Director of Cardus Family and Peter Jon Mitchell is Senior Researcher at www.Cardus.ca. For more information about the family in Canada, see the full report Building Instability: Putting new census data in an international context with key Canadian takeaways.​​​​​​