How is the Widening Education Gap Between Men and Women Affecting Marriage?

Last week, in the first part of this two-part research brief, I looked at how the growing gender gap in the completion of bachelor’s degrees—with women increasingly outpacing men—is differentially affecting the likelihood of men and women marrying a similarly-educated partner.

Here, I look at some of the marital consequences of this widening educational gap between women and men. Pundits suggest that the fact that there are no longer enough single men with four-year degrees means that single women are increasingly having to choose between entering a less than ideal union or foregoing marriage altogether.

Are marriages between partners who do not have the same college degree status less happy, and are women with bachelor’s degrees now commonly choosing to avoid marriage rather than settle on a partner without a four-year college degree?

Research indicates that Americans increasingly prefer to marry someone with a four-year college degree. For men, marrying a college-educated woman is more likely now than in the past, but for women, the same is not true. Is this associated with marital happiness? If so, is this different for men and women, who are marrying similar spouses, “up” or “down”? I also looked at this issue, using the standard GSS item measuring how happy respondents rate their marriages.

Here, to simplify the analysis and focus more on the early marriage years and younger cohorts, my analysis was restricted to those ages 25 to 40, and to the past decade. 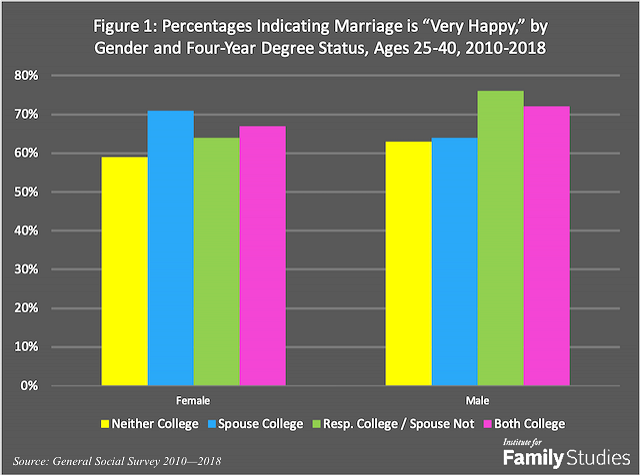 Clearly, the percentage of men and women reporting being “very happy” in their marriage is lowest where neither has completed a four-year college degree. Beyond that, the data gets a bit more interesting. Among women, the percentage describing their marriage as “very happy” is highest among those who do not have a four-year degree but whose husband do, followed by those with a four-year degree married to a husband who has also obtained one.

Despite these variations, for women—with the exception of those where neither spouse obtained a bachelor’s degree versus everyone else—the differences were simply not statistically significant,1 including when comparing women with four-year degrees married to men who also have them, versus those who do not. In the main, this data suggests that women with bachelor’s degrees do not seriously risk marital happiness by marrying less-educated men.

Among men, somewhat book-matching what we see with the women (above), those more likely to call their marriages “very happy” are men with four-year degrees who are married to less-educated women. This is followed by those with such degrees who are married to similarly-educated women. The percentages of men indicating that their marriage is “very happy” when they have no four-year college degree but their wife does is not much different than if they had married a woman who also did not have such a degree. And again, none of these differences were statistically significant anyway.

What about the claim that women with four-year college degrees are increasingly reluctant to marry, given that there is a shortage of comparably-educated, unmarried men, combined with their preference to marry at or above their educational level? The data in Figure 2 below is inconsistent with this claim. Among females aged 25 to 40 with bachelor’s degrees, the percentages ever-married in the past decade are actually highest compared to women without bachelor’s degrees or men of either level of educational attainment. Moreover, during the past five decades for this age group, their marriage rates have dropped the least. 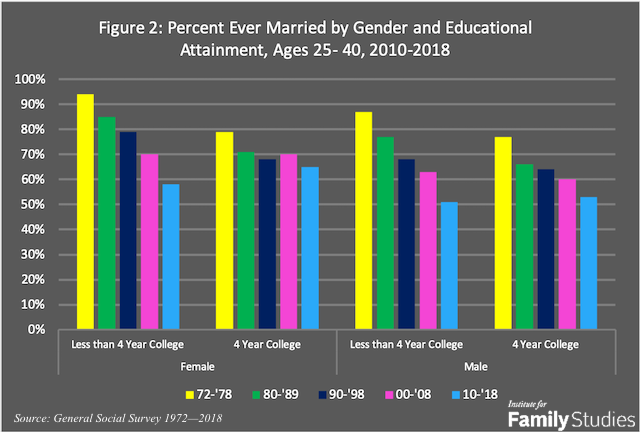 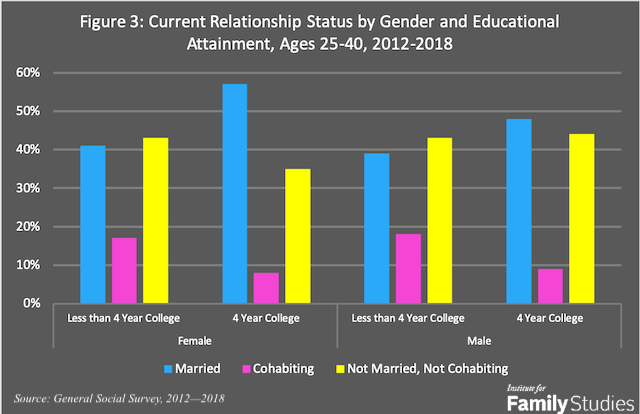 Issues related to the marriage decisions of both men and women due to the gender imbalance in educational attainment are likely to remain a source of discussion and analysis for years to come. Almost 50 years of the General Social Survey show that this situation is more complicated than the pictures presented by pundits and the media.

The data here, as well as other research I have referenced, do not suggest that “marrying down” by women with four-year college degrees is producing widespread marital problems. It also does not show that men are happier marrying these more educated women than they are when (as was common in the past) they are partnered with women who do not have bachelor’s degrees. Given relative declines in marriage rates over time for younger Americans, it is also hardly likely that the paucity of men obtaining bachelor’s degrees is, at least in itself, a major reason for retreats in marriage among young people.

Obviously, more research is needed on the impact of the growing gender gap in the acquisition of four-year college degrees upon marital rates and quality. I suspect, however, that we need not be concerned that having fewer college-educated men is likely to significantly impact either, in itself. Especially when factoring in our burgeoning college debt crisis and the low starting salaries attached to many degrees that are disproportionately obtained by women (such as Elementary Education, Social Work, Fine Arts, and English), and the great salaries and job prospects in a wide variety of skilled trades, women with bachelor’s degrees who marry men without them are not necessarily marrying “down.” Given the current upheavals in the higher education landscape, how the varying educational trajectories of women and men affect marriage should be interesting to study for years to come.

1. Using both nominal and ordinal statistics for both women and men, the differences between those where both partners had less than a college degree, and everyone else combined, were statistically significant, with a chance of error .05 or less. However, other differences were not statistically significant at all, including those between college-educated women who married men with a college education and those who did not.

2. Using ordinal statistics, for both men and women, the chance of error was less than .001.