The Gender Gap in Marriages Between College-Educated Partners

Why are increasing numbers of women marrying “down” (as some folks too often view it), and how is it affecting their marriages? Being concerned about women marrying “beneath their station” seems more the province of PBS dramas about the old English aristocracy than a legitimate concern for liberated young single ladies in 21st-century America. And yet, here we are.

First, an excerpt from the 2015 book Date-onomics1 appeared on Twitter a couple of months ago, which showed that, among college-educated single adults, women far outnumber men, and at a time when unmarried Americans increasingly want to marry those who have completed at least bachelor’s degrees. This tweet produced a surprising amount of commentary, particularly about the so-called plight of single, heterosexual women facing a shortage of suitable marriage partners. Shortly on the heels of this, a fine research study in the Journal of Marriage and Family2 by Daniel Lichter, Joseph Price, and Jeffrey Swigert was released. It argued that current marriage rates are at a 150-year low partly because unmarried women face a shortage of men with what they view as acceptable income and job prospects. It sparked an explosion of interest and commentary in the media, on- and offline, that still continues as of this writing.3

Women, it seems, still prefer men who are able to make more money than they do, and right now the marriage market has a profound shortage of men whose combination of education and income makes  them “good prospects.” Faced with remaining single or marrying what those that Lichter et al., kindly call “less well-suited” men, educated women often choose the former. This is just as the author of Date-onomics and other family scholars4 have argued for years.

Despite the reluctance of single women to marry men with less income and education, such partnerships do not necessarily produce poorer marriage outcomes. For example, two respected recent research studies found that, while these marriages are now more likely than the reverse5 among recent marriage cohorts, such unions are not at increased risk for divorce as they were in the past.6 Even so, we know that, on average, women prefer to not marry men with less education than themselves—something college-educated men routinely did up until less than a half-century ago.

Here, I consider this dynamic over time using the General Social Survey from 1972 through 2018, examining data grouped by decade during this period.7 Using married respondents’ self-reports for the highest educational degree attained for both themselves and their current spouse, subjects were categorized simply as “less than four-year college degree” and “has at least a four-year college degree.”

Among men overall and in each age category, the percentage with bachelor’s degrees married to a spouse with less education declined steadily and dramatically. For example, as Figure 1 below shows, for those ages 33 to 42, that percentage declined from 54% to 17%, which is more than triple. Married females with such degrees, however, mostly went in the opposite direction, especially in the last three decades, although less dramatically so. Particularly, as older women pass from the scene—barring unexpected changes—the percentages of women with four-year college degrees married to men without them will likely continue to increase. For males, this percentage will likely continue to decrease. 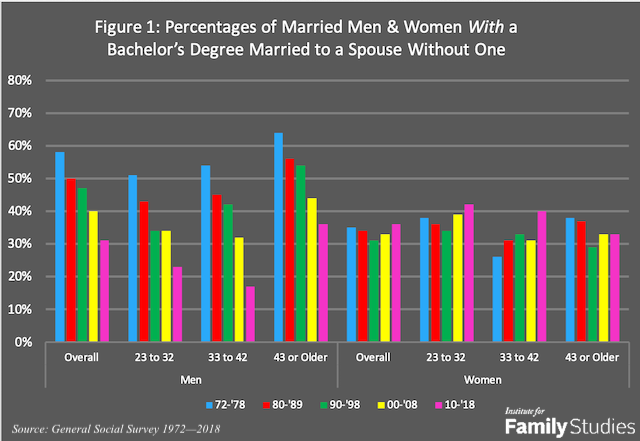 Figure 2 below looks at the percentages of respondents without a four-year college education who are married to a spouse with a bachelor’s degree. Perhaps unsurprisingly, for males, this percentage has more than tripled overall. Among those 33 to 42 years of age, it has gone up by roughly four times.

For females without four-year college degrees, the situation is more nuanced. As more men obtained such degrees, through the 2000s, more women without them had husbands with bachelor’s degrees.8 However, the 2010s showed a decided decline in every age group. As fewer men attend or graduate from four years of college, this trend will likely continue. This might change, all other things being equal, if the percentages of men obtaining bachelor’s degrees picks up significantly and/or the proportion of women graduating from college declines. Neither of those appears likely in the near future, however. 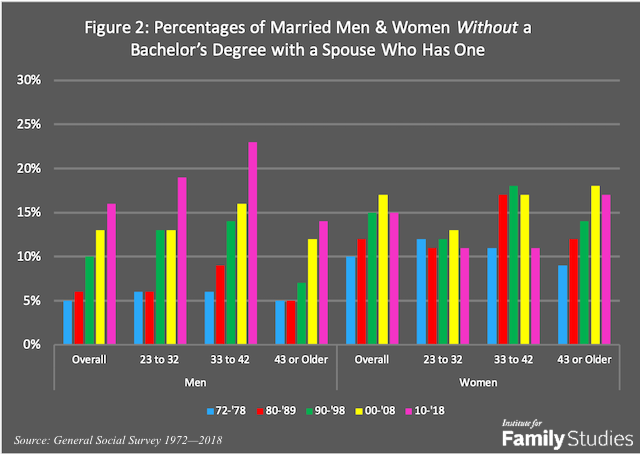 Overall, how has marital educational homogamy changed in the midst of these sweeping changes, measured as I have done so here—namely by whether both partners have a four-year college degree or both have less education? My analysis showed that overall it has actually decreased in this time period, from 86% in the 1970s to 78% in 2010—2018. This does not necessarily contradict other findings that educational homogamy between spouses has been generally increasing over time—which partly has to do with what time periods are being compared and how specific the research measures educational attainment (such as do both spouses have high school diplomas? or graduate degrees?) and how similarity in education is measured. But the data here certainly qualifies this observation.

More importantly, as Figure 3 illustrates, this depends partly on whether one has a four-year college degree or not. For those who do not, there has been a decline in educational homogamy between spouses as I have measured it here. But for those with at least a bachelor’s degree, there has been a dramatic increase in it.9 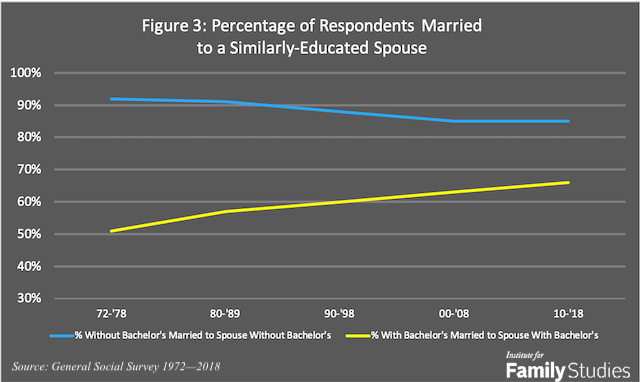 As we have already seen, this also partly depends on the combination of gender and degree attainment. For males with bachelor’s degrees, as I measured it here, educational homogamy has dramatically increased, but it has decreased for men without this much education, and for women overall, as we saw in Figure 1. Regardless, it does appear that the general statement that educational homogamy between spouses is increasing needs to be nuanced. There is complexity here.

Issues flowing out the marriage decisions faced by both men and women due to gender imbalance in the numbers graduating with at least four-year college degrees are likely to remain a source of discussion and analysis for years to come. Almost 50 years of General Social Survey show that this situation and its' impact are more complicated than the pictures presented by pundits and in online discussions.

Of course, the situation is dynamic. There are a lot of other data sources and ways of measuring educational attainment and homogamy in it, so I do not expect this brief research review to be the “last word” on this. But it does raise another important question: Are the marriage rates and marriage quality of younger women with four-year college degrees being hurt by the relative shortage of similarly-educated men? I will address this question in a second research brief on this issue, so stay tuned.

3. For example, a lead piece on The Print for October 3, 2019, was a detailed summary of Lichter's et al., findings. “Unmarried women in the U.S. face a shortage of economically attractive male partners: Study.”

4. Qian, Yue, “Gender Asymmetry in Educational and Income Assortative Marriage,” Journal of Marriage and Family, September 2016; and Wang, Wendy, “A Record Share of Men Are ‘Marrying Up' Educationally,” Institute for Family Studies, November 7, 2017.

5. See Wang, which shows this has happened only since about 2012.

Please note that this is different than whether, overall, marriages in which the partners are educationally dissimilar are less likely to succeed than those in which they are educationally homogamous. With regard to the latter, recent data from Andrew Francis- Tan and Hugo Mialon, “‘A Diamond Is Forever’ and Other Fairy Tales: The Relationship between Wedding Expenses and Marriage Duration,” Economic Inquiry, October 2015, suggests that generally, educational homogamy does lead to more stable marriages. See my general discussion of this in Christian Marriage: A Comprehensive Introduction, (Lexham Press, 2019): 151-52.