“Children with married parents are better off — but marriage isn’t the reason why.” This recent headline from the Washington Post’s Emily Badger offers a crystalline summary of the new progressive wisdom about marriage: Yes, we now acknowledge that children do better in married families, but it isn’t marriage per se that matters for the kids. It’s the “money,” “time,” and “good parenting” found at higher rates among the types of parents who are married that really “drive” children’s outcomes, not “marriage itself.” And that’s a good thing because “family income and parenting skills are more realistically addressed through public policy than marriage anyway.”

Badger is drawing upon a new study by Kimberly Howard and Richard Reeves from the Brookings Center on Children and Families, which found that higher income and better parenting helped to account for much of the positive effect of marriage on children’s success in life. More than a few journalists and scholars, such as Noah Smith, took a similar tack in response to this study; for instance, Smith tweeted: “Promote parenting, not marriage. Give single parents money and parenting classes.”

Not so fast. The new progressive line on marriage fails to appreciate three truths about contemporary family life and public policy.

1) Marriage itself generates more money and is conducive to better parenting, on average, than the alternatives. It’s also much more stable for children.

2) The federal government has neither the will nor the ability to erase the income and parenting deficits associated with single parenthood.

3) The deficits associated with single parenthood can be found even in countries, like Sweden, that have more generous welfare policies than does the United States.

When it comes to money, marriage enables two parents to pool income and assets and, specifically, to capture the income of a child’s (married) father; indeed, married fathers usually earn significantly more than single mothers or single fathers, even similarly credentialed ones. All this translates into a lot more money for the ordinary American families headed by married parents. One study found that the median decline in family income in the wake of a divorce for women who became single mothers was 45 percent. The bottom line is this: The “income effect” discovered by Howard and Reeves is partly a consequence of stable marriage, as well as a cause of stable marriage (more affluent Americans are more likely to get and stay married).

So it goes with the “parenting effect” discovered by Reeves and Howard, or with the idea that “it is the quality of parenting that really matters, not just the structure of the family,” articulated by their Brookings colleague Isabel Sawhill. Compared to single parents, we know that “levels of parental involvement, supervision, monitoring, and closeness are higher, on average, in two-biological-married parent families than in single-parent families.” Undoubtedly, this is partly because the kinds of people who have good people skills are also more likely to be both good parents and good lovers. But it’s also the case that, in most cases, it is easier to parent with a partner: Two parents can invest more time in their children, they can support one another when the going gets tough, and they can encourage and monitor one another in ways that foster higher-quality parenting. And married partners in the United States are much more likely to stick together, compared to their cohabiting peers, when it comes to sharing the joys and challenges of parenting. 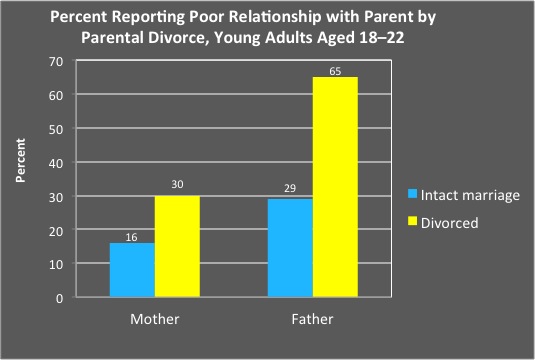 Strangely, the idea that parenting in the context of a committed partnership may simply be easier did not seem to occur to many of the journalists and scholars who picked up on the new Brookings study. But we know that children are more likely to enjoy higher-quality relationships with both their father and their mother if their parents are stably married, as the figure above illustrates.

And, the idea that Congress could muster the will and find a way to spend billions on the additional income transfers and the kind of comprehensive parenting program that might have a chance of bringing single parents within striking distance of married parents beggars the imagination. Indeed, Sawhill acknowledges as much in her new book, Generation Unbound: Drifting into Sex and Parenthood without Marriage. In this political and fiscal climate, the chances of the “give single parents money and parenting classes” agenda passing are just about zero. 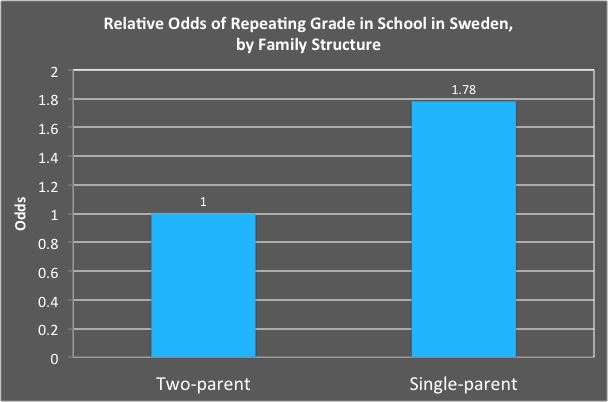 Finally, in the unlikely event that the United States took a hard turn to the left, and adopted a Swedish-style welfare state, there is good reason to believe that the success divide documented by Reeves and Howard between children from married and single parents would continue to separate children from these two types of families. That’s because, even in Sweden, children from single-parent families are less likely to thrive than are children from two-parent families.

A recent report from Child Trends found that the odds that children in Sweden were held back in school were 78 percent higher for children from single-parent families, compared to their peers from two-parent families, as the figure above indicates. Another study of the entire population of Swedish children found that Swedish children from single-parent families were about twice as likely to have psychological problems, attempt suicide, or struggle with substance abuse, compared to their peers from two-parent families, even after controlling for socioeconomic differences and parents’ history of psychological problems (see figure below). Finally, even in Sweden, marriage is the best ticket to the kind of stable, two-parent family that optimizes children’s odds of thriving. In fact, children born to married parents are 44 percent less likely to see their parents break up than are children born to cohabiting parents in this Scandinavian country.

The idea, then, that the overwhelming body of research showing that children are more likely to succeed in an intact, married family has nothing much to do with marriage per se is just not tenable. As I noted at AEI Ideas, “you cannot easily strip marriage of its constituent parts, such as more money and a supportive parenting environment,” and imagine that those parts will be as easily produced outside of the very institution that is ordered to their generation and cultivation. Nor can we can count on a new ethic of “responsible parenthood” to emerge apart from marriage, an argument that Sawhill recently advanced in The New York Times. No other institution reliably connects two parents, and their money, talent, and time, to their children in the way that marriage does. And given that we cannot count on the federal government to launch a Swedish-style public policy push to bridge the economic and parenting divides between children raised inside an intact, married family versus outside of one, the question then becomes: Can anything be done to increase the odds that every American child has an equal opportunity to be raised by his or her own parents in a strong and stable marriage?