by Sammi Trujillo Jenet Erickson Jeffrey Dew
Back to Blog

Brianna reached for her wallet and pulled out her debit card. She paused for a moment as the cashier looked at her expectedly, and with her mind made up, she replaced the card and handed over $50 in cash instead.

After completing her purchase, Brianna mumbled to herself as she walked to her car:

Jason doesn’t have to know about this. Besides, it was my work bonus, and he doesn’t need to know every dollar that I earn from meeting my sale quota. I deserve something nice every now and then, and if he notices, then I'll just say I won it in a work raffle or something.

Most people might look at Brianna’s scenario and think that what she did isn’t a big deal. Many of us have used similar justifications for small purchases and told white lies about those purchases to our spouse, so we wouldn’t end up in a stressful conversation about money. However, this type of financial deception, though seemingly small, may negatively impact marital quality, according to the recent iFidelity Survey conducted by the Wheatley Institution and National Marriage Project.

Drawing on a nationally representative sample, the iFidelity Survey explored the prevalence of a range of financial deceptions among married couples in the U.S., including minor forms of deception, such as hiding small purchases or cash, as well as more serious forms of deception, like hiding bank accounts, credit cards, and loans. As Figure 1 below illustrates, more than half (58%) of participants reported financially deceiving their spouse in some way, while 51% reported that their spouse had financially deceived them in some way. The most common forms of financial deception were hiding small purchases, which 44% of respondents admitted doing, followed by 31% of respondents who reported hiding cash. More serious forms of financial deception were less common, but also prevalent: 12%-15% of respondents reported hiding bank accounts, credit cards, loans, and major purchases. 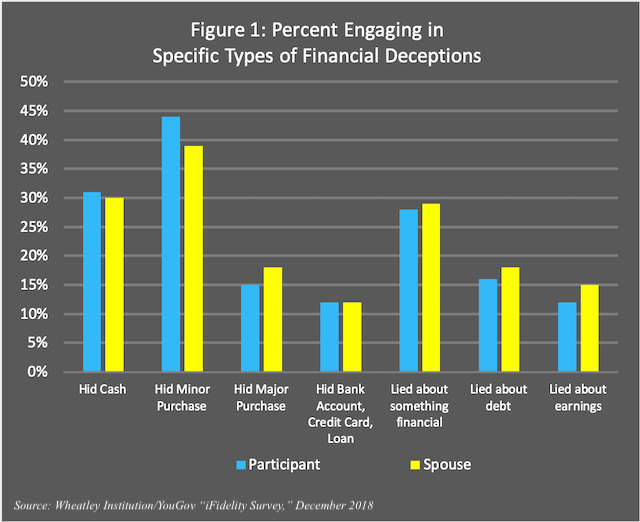 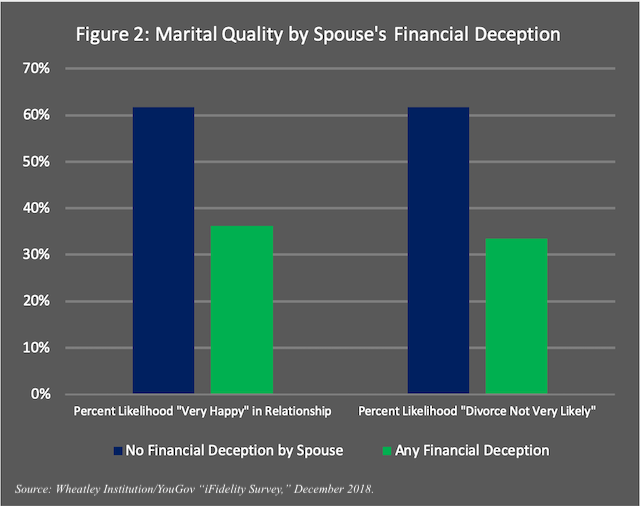 As expected, more serious forms of deception predicted greater challenges for marital quality. But even minor forms of deception were related. Respondents who reported their spouse hiding minor purchases from them were 9 percentage points less likely to say that they were very happy in their marriage, and 10 percentage points less likely to say that divorce was unlikely compared to those whose spouses had not hidden minor purchases from them. 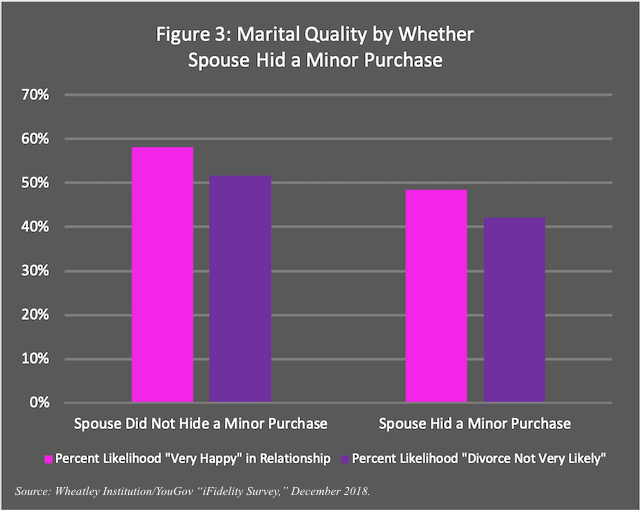 One reason financial issues appear to be so important to marital quality is that money is often symbolic of how we experience core human desires—security, enjoyment, benevolence, trust, and autonomy. When couples argue about money, they are often grappling with one of these deeper issues. In cases of minor financial deception, a spouse may hide a purchase or cash because they feel that the spending power is unequal or that their needs are not being met. On the other hand, spouses who discover that they have been financially deceived feel hurt and betrayed for similar reasons—they don’t feel secure or trusted, or they may feel they have lost equal spending power.

Although the results from the iFidelity Survey cannot establish whether financial deception leads to unhappy marriages, or whether unhappy marriages lead couples to financially deceive one another, what does appear clear is that openness, transparency, and honesty about money are part of high-quality marriages. Money in marriage provides an everyday opportunity to practice the qualities all strong marriages depend upon—trust, selflessness, respect, patience, and honesty.

While overcoming the fears and anxiety that tend to come with openness about money may be difficult, the iFidelity Survey shows that the outcomes of higher marital happiness and greater security against divorce are worth the effort.

Noguchi, Yuki, "Keeping money secrets from each other: Financial infidelity on the rise," NPR, April 19, 2019.