by W. Bradford Wilcox, @BradWilcoxIFS Vijay Menon
Back to Blog

Conservatives are family values hypocrites, Nick Kristof recently argued at The New York Times. They talk about marriage, family, and traditional values, but, in reality, they have difficulty living up to their professed values. In fact, it’s actually “liberals [who] practice the values that conservatives preach.”

Certainly, Kristof is onto something when it comes to members of the political class, such as Newt Gingrich, Roy Moore, and Donald Trump. But the story is rather different when one looks at ordinary families across America. In fact, over at Politico, Vijay Menon and I take issue with Kristof’s argument. It turns out that Kristof is largely conflating family problems in the South with family problems among conservative families. (This is what scholars call an “ecological fallacy.”)

When we look at data from the General Social Survey, we find that Republican families are actually happier and more stably married. For instance, Republicans parents today are more likely to be in their first marriage, compared to Independent and Democratic parents, as the figure below indicates. 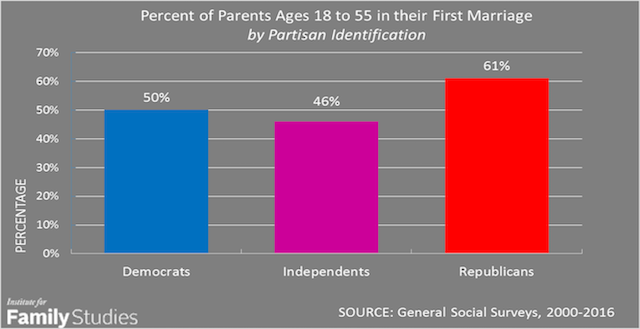 Menon and I also find that the Republican advantage in family stability is true for college-educated and less-educated Americans, for more and less religious Americans, for whites, and for Northerners as well as Southerners. In fact, when it comes to the South, as we note in Politico:

the relatively fragile state of families in the Republican South does not apply as much to individual Republicans in the South. Indeed, in both the North and the South, Republican parents are at least 9 percentage points more likely to be in their first marriage, compared with Democrats and independents. [This means]: Just because the Republican South has more family fragility does not mean that Republican families are fragile. In fact, Republican parents in the South are more likely to be in their first marriage than Democratic and independent parents in the North. 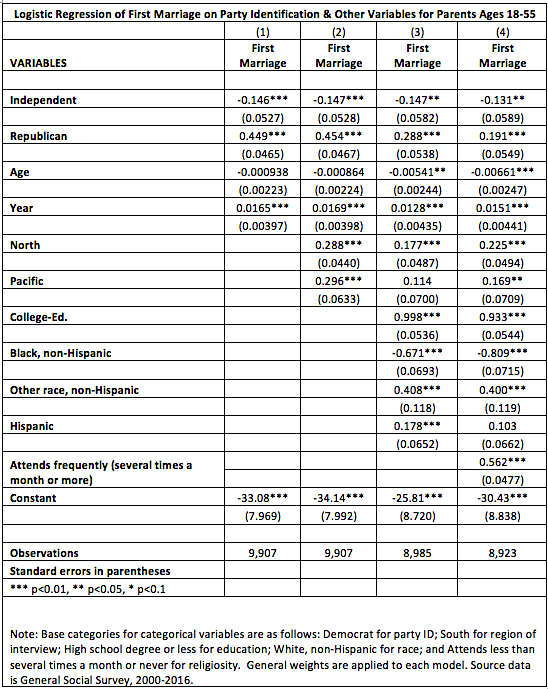 But does the Republican advantage in family stability hold up in a multivariate context? Yes, it does. As the table above indicates, even after controlling for region, education, race, ethnicity, religiosity, and age, data from the General Social Survey still indicate that Republican parents are more likely to be in a first marriage.

Our research, then, suggests an “elective affinity” between Republicans and a marriage-centered lifestyle. For a number of reasons—cultural, economic, and psychological—Republicans today appear more likely to have their children in marriage, to remain stably married, and to be happy in their marriages. In other words, most Republicans don’t live their lives like Trump or Gingrich. The question, of course, is whether “this Republican family advantage will persist if Republicans keep anointing leaders who don’t practice the family values the party has preached.”