by Samuel J. Abrams, @SamuelAbramsAEI
Back to Blog

In the run-up to the 2020 election, headlines about political differences ripping apart families were everywhere. From the New York Times leading with “Families Have Been Torn Apart by Politics. What Happens to Them Now? to the US News and World Report article, “'You Are No Longer My Mother': How the Election Is Dividing American Families,” it would certainly appear that the vitriol of the political world has entered the home. While many media outlets tell compelling stories, headlines often do not present the complete picture and are often missing critical details and data.

New data from the American National Election Study (ANES), a seven-decade-long survey about campaigns and elections, show that narratives about family political turmoil likely have been vastly overstated. The overwhelming majority of Americans report that political differences in their homes or families have had little real impact on their familial relationships, even if a few cases that did made headlines. 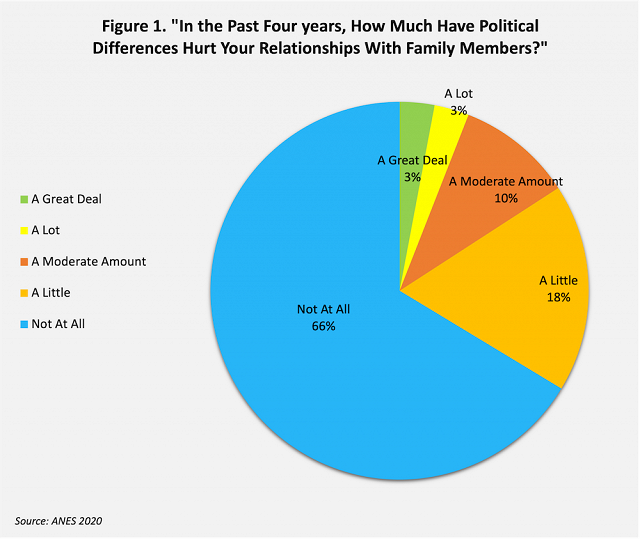 As of late, partisanship is not a sure-fire predictor of who gets your vote. Many Republicans today identify with the GOP but are anti-Trump, and there are plenty of progressive Democrats who do not feel Biden represents them. If we look at Biden and Trump voters specifically, we still see fairly small numbers reporting familial strife. Of those respondents who reported voting for Donald Trump, 90% report that political difference hurt their relationships with family members either a little or not at all. As for Biden voters, 82% say political differences have had no real impact on family relationships, suggesting again that the media narrative may simply be overblown.

Greater cleavage can be found among generational cohorts. While 11% of Gen Zers—those between 18 and 24 today—report familial strain over political differences, a strong majority (71%) still say they have experienced no real impact. Millennials report almost identical views – 9% have had their familial relationship impacted by political differences while 70% have not. Those in Gen X, the parents of Gen Zers, are even less likely to report familial strife, with 6% reporting such impact and 86% stating that they have had no real trouble. These figures are almost identical for Boomers (86%) and those in the Silent Generation (89%) as well. America’s youngest cohort is twice as likely to report family tension based on politics—but the overall numbers are remarkably low and this continues a robust tradition of younger generations struggling with older generations.

Finally, one’s relationship with family can differ greatly depending on whether one lives away from or with them but not so much when it comes to politics, it seems. When not living with any family, just 8% report political problems and another 80% report no real trouble. When living with family—one member or more—the numbers look almost identical, again; 8% report a great deal or a lot of problems and 83% report minimal to no problems at all. The numbers barely move when the numbers jump from living with one or more persons to living with 5 family members or more (8% report some troubles and 80% report minimal or no problems at all), which demonstrates the empirical fact that whether one lives with a little family, a lot of family, or entirely separate from family, politics is not causing widespread acrimony and family degradation. 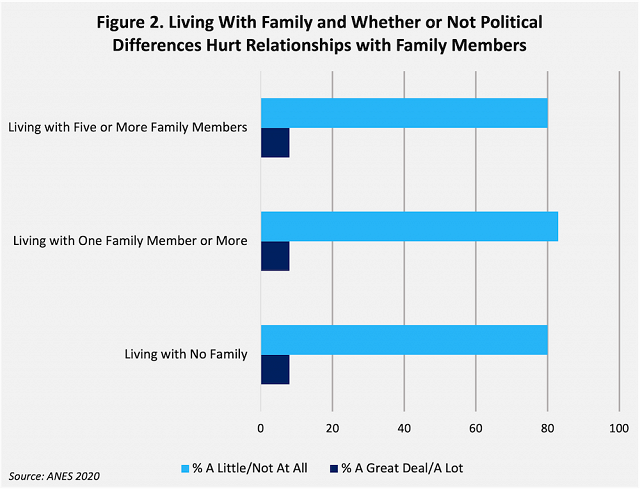 While the ANES data do not give us a window into a respondent’s individual family political composition, the numbers of Americans who report familial relationships souring over politics is fairly small. The consistency of these findings across partisan lines and regardless of physical separation suggests that the overwhelming majority of familial bonds in this country are stronger than most of the mainstream media would like us to believe.

Samuel J. Abrams is professor of politics at Sarah Lawrence College and a visiting scholar at the American Enterprise Institute.