A Record Share of Men Are “Marrying Up” Educationally

The shift happened mostly after 1990 when the share of husbands who were better educated than their wives started to fall. During the same period, young women surpassed men in college enrollment and graduation rates. 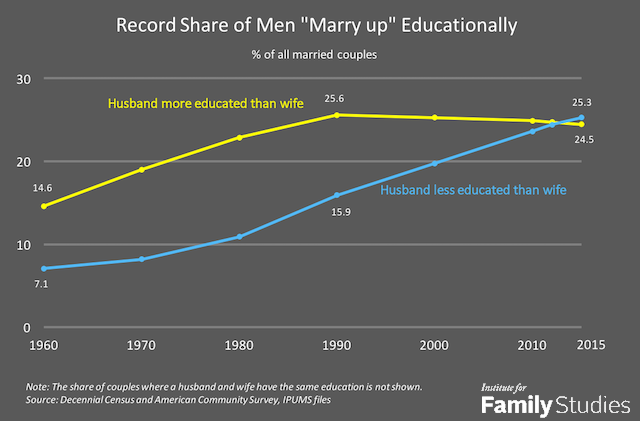 With the rising share of couples in which one partner has more education than the other, the share who have similar education levels has been falling. In 1960, 78% of couples were in this group, but by 2015, the share had dropped to a record low of 50%. The primary reason for the decline is that marriages between spouses with high school or less education are much less common today, declining from 74% of all marriages in 1960 to only 23% in 2015.

Even though overall, wives have more education than their spouses today, men are still the primary provider in a majority of marriages. In 2015, more than 7-in-10 married men (73%) had a higher income than their spouse, although the share was down from 91% in 1960. During the same period, the share of married women who out-earned their spouses rose from 6% to 25%. 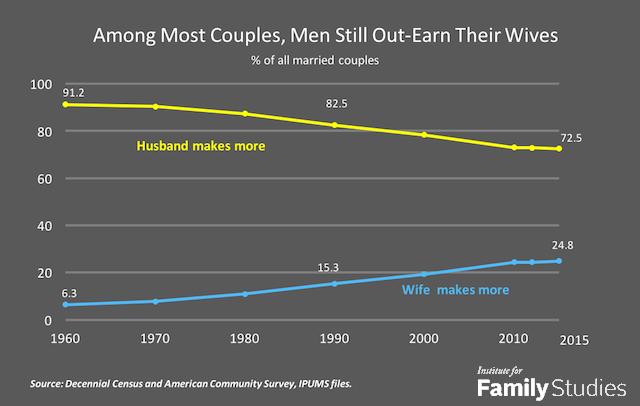 This discrepancy between education and income within married couples also applies to newlyweds. Among couples who married in 2015, only 20% of husbands had more education than their wives, yet 67% earned a higher income. 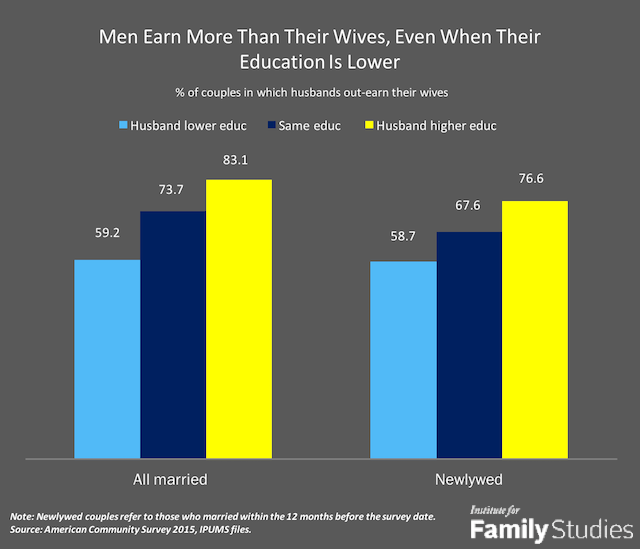 This “within-family income gap” happens primarily for two reasons. First, each individual family is part of the society, where, overall, working women are paid less than men. Aside from workplace discrimination and the motherhood penalty, married women also tend to carry on more family responsibilities than their husbands, and make career choices that prioritize work and family balance. Even among the younger generation of Millennials where women have more education than men, this pay gap still exists.

This income gap is also a result of the self-selection process. Despite women’s gains in education and in the workplace in recent decades, the traditional pattern in dating and marriage persists. When asked about qualities in a potential spouse or partner, never-married men place more importance on choosing someone who shares their ideas about raising a family, while never-married women view having a steady job and financial security as a top priority in a potential partner. Therefore, even when women “marry down” educationally, they continue to “marry up” in income.

From an income pooling perspective, marrying someone who is better educated and perhaps also making more money increases your overall standard of living. As a recent study suggests, married men may have benefited most from women’s progress in education and the workplace, simply because they have more opportunities today to marry women who are better educated than themselves.

Moreover, the declining share of marriages between spouses at the lower end of the education spectrum is troublesome. It goes hand-in-hand with the decline of marriage among less-educated Americans. And it further contributes to the growing marriage divide in the U.S., which affects the well-being of children and families in a profound way.

*Note: In this blog, the relative education between husbands and wives is based on four education levels: high school or less, some college, college, and advanced degrees. Therefore, if a college graduate marries someone with a post-graduate degree, it is considered “marrying up.” In my earlier analysis on the similar topic, marriages between a college graduate and someone with an advanced degree were not captured separately.