by Rhonda Kruse Nordin
Back to Blog

It was a dark and stormy night. The rain came down in torrents, beating against my windshield, slowing my drive. I arrived at the community center later than intended, but still in time to visit with the young mothers who had gathered to hear me speak.

Despite the weather, their mood was jovial, in anticipation, I suspect, of my message about sex and intimacy. Their unrestrained chatter revealed a desire to hear immediate and magical solutions—not unlike most couples with whom I speak, who want to build or restore a lasting marriage.

This wasn’t the first time I’d addressed such a crowd; over nearly 30 years, I have dedicated my efforts to researching and writing on family formation, and sharing that information with young couples.

That night, as on many other occasions, I doled out my wisdom, drawing upon anecdotes from hundreds of committed couples, sharing intricate workings of my own long-term marriage, and honing in on “time-honored solutions” offered by doctors, psychologists, family therapists, and clergy members.

Yet, for the first time, my heart just wasn’t in it. Secretly, I questioned my effectiveness. Did I really have any ideas for these eager young women? There are no guarantees, after all, that doing just the right thing, at just the right time, assures marital longevity. Clouded in skepticism, I doubted I could inspire one mother, even one iota.

And if they were looking to my generation for a blueprint of a lasting marriage, well, perhaps we didn’t have one. Just that morning, I’d read the recent report by the Pew Research Center on “gray divorce.” Based on data from the National Center for Health Statistics and U.S. Census Bureau, Pew reports that the divorce rate among adults age 50 and older “roughly doubled” between 1990 and 2015. During this same timeframe, the divorce rate nearly tripled for adults over age 65. 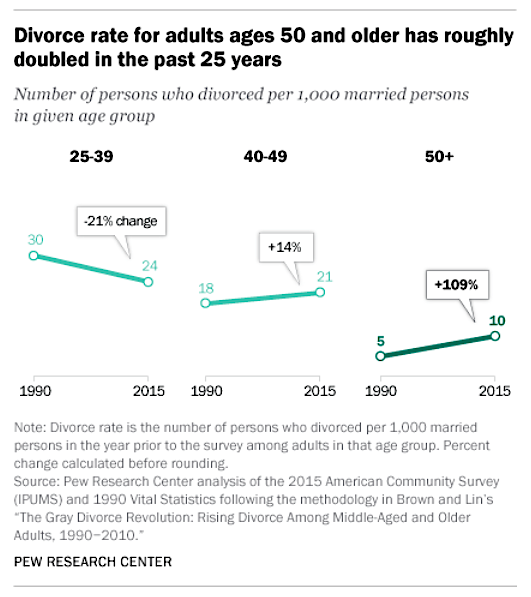 These numbers simply hit too close to home. I know firsthand many real-life situations that led to the dissolution of these later-in-life unions. The men and women that have fueled this rise in divorce are, after all, my contemporaries—Baby Boomers born between 1946 and 1964. They were certainly old enough to be the parents, and maybe the grandparents, of those in my audience that night. Statistically, many of the young mothers before me may have experienced this so-called “graying of divorce” that had doubled in their lifetime.

I mentally shuffled through the long list of divorces I knew intimately—those of family members and friends and the many couples I’d come to know professionally. Despite differences, their stories were the same. Each had once cared for the other fiercely, yet failed to overcome less than affable qualities that emerged since they married, or to forge the unbreakable bond that keeps couples tethered together forever.

We were the generation that married. Inspired by the on-screen romance between Ali McGraw and Ryan O’Neal in Love Story, we walked cross-stage for our diploma one day, and through church doors the next. Our marriage rate was roughly 40 percent higher when I left high school in 1972 than was recorded some 40 years later. We also married earlier, beating today’s couples to the altar by a good six years, on average.

While Love Story led us to believe that “love means never having to say you’re sorry,” we learned that simply wasn’t true. One in four marriages ended within five years, a dissolution rate nearly a third higher than estimates for that same time span following marriage in 2014.

Few couples labored over whom to blame for a marriage that wasn’t working: by then, the “No Fault Divorce Law” was enacted in California and adopted thereafter in most states, thus fueling a jump in divorces by 20 to 25 percent, followed by a gradual rise in ensuing years.

Ever believers in the institution of marriage, the bulk of Baby Boomers that divorced, went on to remarry, have children and grandchildren, and for many, live happily ever after—at least for a decade or two.

Marriages flourish only when we find a way to learn from and work through the times we really don’t feel like doing those things that make a marriage work.

Researchers now link this earlier pattern of marital instability among Baby Boomers to today’s rising divorce rate for those over the age of 50. Nearly half of divorces among those over 50 involve men and women in remarriages, which, according to Pew, “are less stable than first marriages.” Among all adults 50 and over who divorced in 2015, 48 percent were in their second or later marriage.

Couples that remarry later in life also face a greater risk of divorce. Among adults 50 and older who have been married for less than 10 years, the divorce rate is roughly a third higher than for couples married longer at 20 to 29 years, according to the Pew report.

Of course, these generalities don’t hold for all remarriages or for all later-in-life unions. I know of many rock-solid remarriages and an equal amount of flimsy firsts.

The reasons that possess men and women to end a marriage after what seems “a lifetime together” are as varied as the couples themselves. We may think we know what causes the rift between a man and a woman: It’s her cooking, his drinking, her carousing. Maybe she swears, or he snores. Perhaps it’s the house, or their jobs, or the kids, or all three. No one really knows what goes on within the four walls of a home. So really, none of us can judge, nor should we.

That night, though, I shoved my concerns over gray divorce to the back of my mind and refocused on the women before me. Fresh-faced, wide-eyed, and giddy at the prospect of gleaning some bit of wisdom to apply to their marriages, they were waiting for the magic.

So, not holding back, I sifted through a mental file that housed details of many long and successful marriages I’ve known. I told them that happily-married couples do certain things each day to live together successfully. I expounded on the so-called “behaviors of love,” the common courtesies and everyday exchanges that add sparkle to a marriage or tarnish it with their absence. We touched upon the art of the simple smile, and identified trigger points of conflict and how to deflect them. The ideas I shared weren’t flashy or new, or—as I reminded the women—foolproof.

I chose not to share the results from Pew haunting me that evening. Divorce is less common for the young mothers in my audience. And the college educated (as most of them were) are less apt to divorce than their counterparts who are less educated. I wanted these young mothers to bask in the glow that yes, they could and they will succeed at marriage.

Being a husband or wife—regardless of age or time together—requires hard work, self-discipline, and self-sacrifice in a common project. Every couple is different, just as what makes them happy in their relationship varies greatly. Marriages flourish, I believe, only when we find a way to learn from and work through the times we really don’t feel like doing those things that make a marriage work—whether at 50, 60 or any stage of marriage.