One of my biggest professional responsibilities in the past year, while I served as research director for the World Family Map (released today), was figuring out which division of paid and domestic work among couples with children was associated with the highest level of happiness.

Thus, for months, while preparing the data, defining the categories, structuring the analysis—all the stuff social science researchers have to do before they can actually perform a statistical test—I could not stop thinking about how couples’ division of labor might be related to their happiness. And whenever I felt unhappy, I tried to figure out how my husband and I should fix our division of labor to make me happier. Imagine my relief when I finally ran the analysis and discovered that parents in most regions of the world—including the United States—are equally happy with any division of labor. I got to stop stressing over how to get it right. The same work that channeled my thinking toward suspecting that a couple’s division of labor might be crucial for their happiness taught me that it is not.

In the 2015 World Family Map report we didn’t just compare couples dividing labor along traditional gender lines to those with a more egalitarian split; we also looked at couples where one partner was overburdened relative to the other. We used data from the International Social Survey Programme’s 2012 survey on Family and Changing Gender Roles to examine the work-family arrangements and happiness of 7,695 couples with children in 32 countries, and classified each couple into one of the following division-of-labor categories:

Couples’ happiness didn’t seem to depend on fairness—avoiding the arrangements when one partner carries a second shift—and it didn’t depend on traditionalism or progressiveness. That doesn’t have the same ring of truth to it that Michael Lewis’ writing does. Jennifer Senior quoted him in her TED talk last year as saying:

The surest way for a couple to start fighting is for them to go out to dinner with another couple whose division of labor is ever so slightly different from theirs, because the conversation in the car on the way home goes something like this: "So, did you catch that Dave is the one who walks them to school every morning?"

Parents all understand that quote because we all think that the way we divide labor is important. But Senior’s point is that the massive revolution in parenting expectations that has overlapped with equally revolutionary changes in gender roles means that we don’t have scripts to guide us in how it is to be done right. She says that as a result, couples fight and both mothers and fathers have legitimate gripes. Is it any wonder that when we don’t have it all figured out, there isn’t one right way to do it? We certainly see that in our data: every world region shows marked diversity in how couples divide labor. 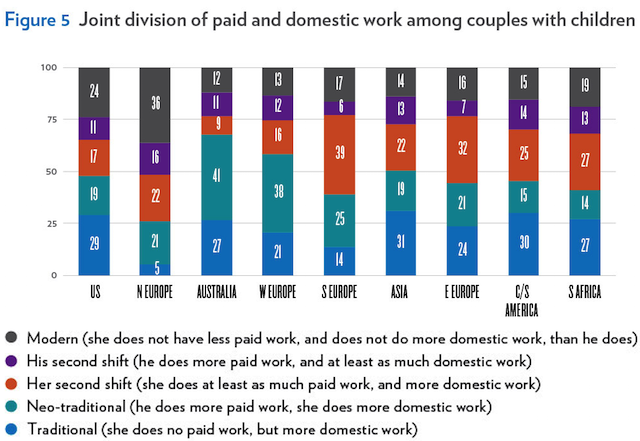 Or, from a different perspective, is it really surprising that couples choose a division of labor that works for them? There may be no one best way to divvy up responsibilities, but people are not randomly assigned to various divisions of labor: their ideologies informed what kind of partner they picked and how they and their partner work things out.

I can say with confidence that I am not just speaking from a U.S. perspective. The division of labor among couples with children was not significantly related to happiness in the U.S., Northern Europe, Southern Europe, Asia, or Central and South America. Western Europe was the one place people were happier when men performed a second shift than when women did. Eastern Europeans were happier when men did more paid work. Everywhere else, the differences in happiness were minimal. 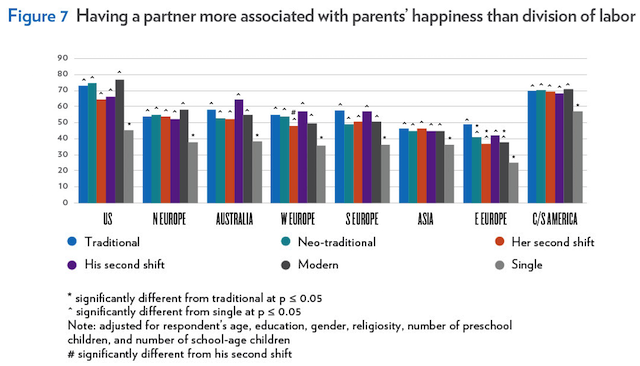 Having a partner, however, was related to happiness: Single parents are significantly less happy than couples dividing labor in every way we considered, in every region of the world. Having someone to share the load with seems more important than how it is shared. That makes sense to me, for if the burden is all yours, you have to focus on the end goal. There isn’t as much freedom to enjoy your kids while getting them ready for bed if part of that process is rushing to put away the food from dinner. Anything that spills along the way needs to be cleaned up before you can finally enjoy bedtime stories. Or maybe you just read them because you are too tired to enjoy them.

There may be more to it than that, though. Remember how wrong I was to put everything about happiness through the division-of-labor filter? I think we would do well to consider shared joy, too. There are moments when I delight in something like looking at one of my daughters dancing and I see my husband enjoying the same moment. One of us will often say to the other: “nice job on the baby.” It just isn’t the same to see something wonderful—like a toddler sharing without being asked to—without having someone else to savor the moment with. It also helps to have someone remind you of the moment later when the same toddler doesn’t want to go to bed. I’ve been a single parent. I delighted in my kids. But some delights are better shared. Maybe that kind of thing matters more for happiness than how paid and domestic work are split up.