by W. Bradford Wilcox, @BradWilcoxIFS Samuel Sturgeon
Back to Blog

The liberal imagination tends to assume not only that history unfolds in a progressive direction but also that progressivism’s disparate values and groups need not contradict one another. But from Brexit to Donald Trump, the past year has served as a bracing reminder that history does not always head in a progressive direction, and that important constituencies of the progressive coalition—such as the white working class—do not always push history in a leftward direction. Now there are new signs that another prized progressive value, gender equality, may be in trouble—partly thanks to key members of the progressive coalition.

New research indicates that young millennials, who many assumed would be torchbearers for a more progressive approach to family life, actually take a more traditional view of family arrangements than Generation Xers and baby boomers when they were young adults. After embracing increasingly feminist family attitudes from the 1970s to the 1990s, young adults are more likely to embrace traditional attitudes about male breadwinning, female homemaking and male authority in the home, according to a new report from sociologists Joanna Pepin and David Cotter. They note that although millennials have not backed off their support for opportunities for working women, they are less likely to embrace egalitarianism at home compared with young adults two decades ago. In other words, the gender revolution in attitudes among young adults has stalled out or even shifted course.

This represents an important change in the evolution of gender attitudes. From the 1970s to the 1990s, as baby boomers and Xers came of age, a growing share of young adults ages 18 to 25 rejected the view that it is “much better for everyone involved if the man is the achiever outside the home and the woman takes care of the home and family.” But since the mid-1990s, support for this traditional view has surprisingly climbed among young men and women, as historian Stephanie Coontz recently noted in the New York Times. In the 2010s, 28 percent of young adults agreed with this view, compared with 22 percent in the 1990s, according to the General Social Survey (GSS). (There has been some debate about the 2016 trend in this GSS attitude, but the overall pattern in the GSS and another survey, Monitoring the Future, is consistent with the idea that a growing minority of younger millennials hold a more traditional view on this male breadwinner-female homemaker item.) 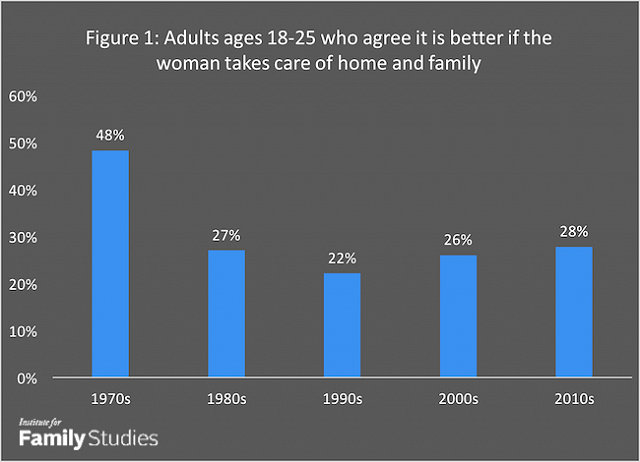 Part of the reason that today’s young adults are less likely to hold egalitarian gender attitudes regarding the division of family life is that minorities, especially Hispanics, make up a growing share of American millennials. In 1980, only 7 percent of young adults ages 18 to 25 were Hispanic; today, 22 percent are. That matters, because young Hispanics (especially young Hispanic men, who prefer traditional family arrangements at higher percentages than Hispanic women) are more likely to embrace a traditional division of family and work responsibilities than other young adults.

Here, Hispanic families’ long-standing embrace of male breadwinning and female homemaking stands in tension with American progressivism’s commitment to gender equality in the home. Likewise, younger African Americans hold relatively more traditional gender attitudes than do white millennials. Our findings are consistent with other research indicating that minority men are more likely to hold somewhat more traditional gender attitudes about domestic life. Here again, then, we have evidence that progressivism’s disparate coalition members are not always on board with all of the goals of the movement.