When It Comes to Family Structure, the U.S. Is a Laggard

When it comes to family structure, the United States is a laggard. As Nicholas Zill documented in this space in February, almost seven in ten kids in the United States live in two-parent families. New international data from the recently released World Family Map Report indicate that in this area, the U.S. is an outlier among wealthy nations—but not in a good way. Out of 41 countries with available data on this measure, we place a disappointing 32nd, well below Canada, Australia, and the European nations under examination.

Children are most apt to live with two parents (who could be biological parents, adoptive parents, or stepparents) in Asia and the Middle East, as the below figure illustrates. According to the data available for the specific countries examined in these regions, more than 80 percent of children in Asia and the Middle East live with two parents, ranging from 85 percent in the Philippines and Indonesia to 94 percent in Jordan. 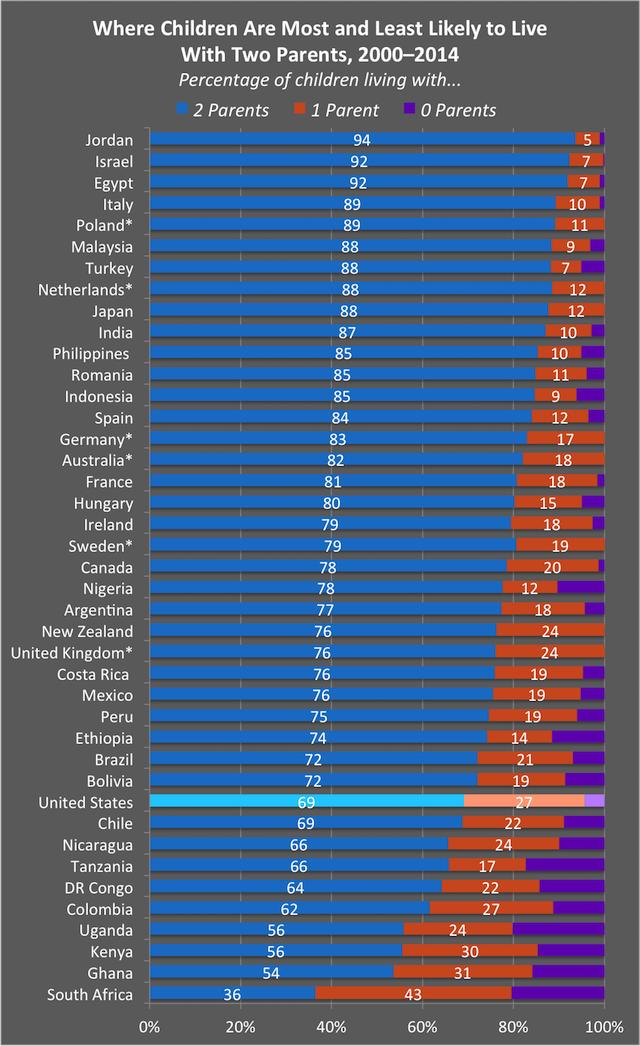 Source: World Family Map Report, 2015. See here for full information on the source for each country. Note: Countries marked with an asterisk (*) did not measure the percentage of children who live with no parents. Parents include biological, adoptive, and step-parents.

Finally, in North America, Oceania, and Europe, a substantial minority—about one-fifth—of children live in single-parent households, and less than 6 percent of kids live in households without at least one of their parents. In Eastern Europe, 11 to 15 percent of children live with a lone parent. In these regions, the United States (27 percent), the United Kingdom (24 percent), and New Zealand (24 percent) exhibit particularly high levels of single parenthood. Many European countries have projected that the proportion of children living with single parents will grow through 2030.

This post includes text adapted from the 2015 World Family Map Report, which was sponsored by Child Trends and the Social Trends Institute and cosponsored by the Institute for Family Studies.