What's Behind the Reversal of the Gender Gap in Higher Education?

According to the Census Bureau, U.S. women now lead men in educational attainment for the first time since the Census began tracking the measure in 1940. The headlines surprised me: I assumed we had passed that milestone already, since women have earned more than half of bachelor’s degrees each year since the early 1980s.

That women have grown more likely to graduate from college in the past few decades seems natural: We have access to a far wider range of careers than our great-grandmothers did, and the economy favors the well educated now more than ever. In light of the rising value of a college degree, it’s just strange that men haven’t prioritized their education as much as women have. Why haven’t they? Why do women increasingly outnumber men on college campuses? 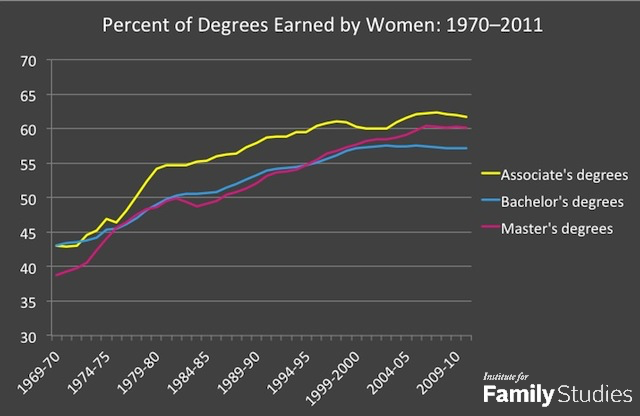 In a new article in Family Relations, William Doherty, Brian Willoughby, and Jason Wilde provide evidence for a thesis not many have considered: Changes in family structure have contributed to the growing gender gap in college enrollment. Growing up with stably married parents makes children of both sexes more likely to succeed at school, even controlling for socioeconomic status, but father absence seems to hurt boys more than it does girls. Thus, as father absence becomes more prevalent, girls gain a relative advantage in the classroom.

Doherty and his coauthors share two major findings that support this theory. First, because they noticed that “the college enrollment gender gap…began to emerge about 18 years after the beginning of major population shifts in family structure,” they compared nonmarital birth rates from 1948 to 1993 with the gender difference in college enrollment from 1966 to 2011. They discovered “a near-perfect linear relationship” between changes in the two measures: “The higher the nonmarital birth rate grew, the lower the ratio of males to females [enrolled in college] became as each birth cohort reached age 18.”

Since correlation does not prove causation, the three researchers then sought to replicate that basic finding at an individual level. For this investigation, they used longitudinal data from Add Health on more than 15,000 young people who were in middle or high school in the mid-1990s. Unfortunately, because the questions about family structure in the Add Health survey were not very detailed, respondents had to be divided into two simple categories: those whose biological father had been absent since birth, and those who, as of their adolescence, had lived with their biological father at some point (whether for a short period or their entire childhood). The data on educational attainment—measuring if respondents had attained at least some college education, whether or not they had completed a degree—came from a later wave of the survey, when respondents were 24 to 32 years old.

The results showed that among young people who had lived with their fathers at some point, 72.1 percent of women and 63.1 percent of men had some college education, meaning men enrolled at 87.5 percent the rate of women. Among those with no father present, the figures were 61.3 percent for women and 49.2 percent for men; the men enrolled at 80.3 percent the rate of women. In other words, a gender gap favoring women was evident in both groups, but the gap was larger among young people whose father was absent. The ratio of the relative risks (0.918) indicated that the finding was statistically significant: “Males were disproportionately less likely than females to attend college if they came from a family in which the father had been absent from birth.” The method Doherty et al. used to analyze the Add Health data did not allow for controlling for the usual background characteristics; however, the relative education levels of the Add Health sample’s male-female sibling pairs, who would share many socio-demographic traits, were consistent with those of the overall sample.

The study does not go into much detail on exactly why father absence appears to undermine boys’ academic achievement more than that of girls. In “Wayward Sons: The Emerging Gender Gap in Labor Markets and Education,” a 2013 report from Third Way, David Autor and Melanie Wasserman provide some answers. First, long before gender and family structure differences in college graduation appear, there emerge differences in academic performance and behavior at school. Boys get in more trouble than girls from elementary school onward, and the gender difference is greater among children from fatherless homes.

That may be due, Autor and Wasserman write, to parents’ usage of time. More highly educated parents have increased the amount of time they devote to child care activities in the last twenty years. Less educated parents—who are more likely to be low-income and single—have done so, too, but not to the same extent. “If boys are more responsive to parental inputs (or the absence thereof) than are girls,” Autor and Wasserman summarize, “then it is possible that the gender gradient in behavioral and academic development could be magnified in single-parent households.”

And then, of course, there is role modeling: “If children aim to emulate the adult roles of their same-sex parent, then girls may increasingly expect to fully support both themselves and their children whereas, conversely, males may come to anticipate a less central or more transient role.” Doherty, Willoughby, and Wilde make a similar point:

As more boys grow up without their father in the home, and as women (especially in low-income and working-class communities) are viewed as the more stable achievers, boys and girls alike [may] come to see males as having a lower achievement orientation and less aptitude for higher education. In the context of persistent influences of family structure, public policy, and macroeconomic forces, at some point social norms regarding academic goals become self-reinforcing within peer groups and perhaps even with parents. Stated simply, college becomes something that many girls, but only some boys, do—the opposite of the earlier cultural norm.

Sure, plenty of men (and women) who don’t go to college still find decent jobs and lead happy lives. But in light of the many benefits associated with college degrees—from higher income and a lower unemployment rate to greater marital stability and better health—we shouldn’t rest easy when any group finds them increasingly difficult to attain.