What Parents Mean by “Think for Yourself”

by Jeffrey S. Dill
Back to Blog

As Alexis de Tocqueville traveled through the young United States, he observed remarkable differences in parents’ relationships to their children compared to the families in his home country of France. In 1830s America, he saw less authority and tradition in the parent’s role, and a greater desire to develop the choices and opinions of the individual child. These more democratic familial arrangements, in Tocqueville’s mind, had significant effects on the larger American society.

And parents get the message. Studies have consistently demonstrated that American parents want independent children. Parents in the famous Middletown study in 1924 expressed discomfort with “strict obedience” and placed a higher value on qualities like independence, frankness, and tolerance. Throughout the twentieth century Tocqueville’s initial observations were confirmed: emphasis on qualities linked to the autonomy of the child came to outweigh the earlier emphasis on obedience to institutional and adult authority.

Since 1986 the General Social Survey has asked Americans, “What is most important for a child to learn to prepare him or her for life?” For over 25 years, respondents have ranked “to think for him or herself” as their top priority by far (the other choices are to help others, to obey, to work hard, and to be well liked or popular). Sociologist Duane Alwin uses this and other data to demonstrate the steady decline of obedience as a desired quality for children in polling data through much of the twentieth century.

Some believe this increasing focus on our kids’ independence and autonomy has led to a narcissism epidemic among the so-called trophy generation. Perhaps that’s true. But interviews with parents around the country suggest that “thinking for yourself” means different things to different families.

In our interviews with 100 parents, we asked the same question about raising children from the General Social Survey, and had respondents rank their desired qualities for their kids from a list.  The majority of all parents in the interview sample, regardless of education level, say “thinking for yourself” is the quality they most desire for their children; it is, by far, the highest ranking choice for all parents. 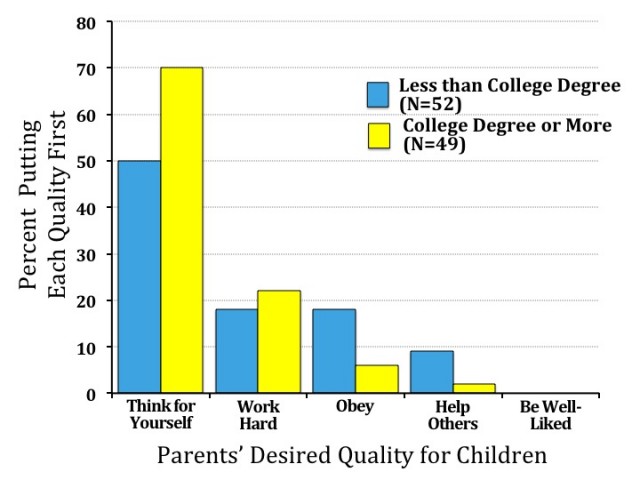 We then asked all the parents in our sample what, precisely, “thinking for yourself” means to them in order to investigate why most of them value it so highly. It is clear that for some parents (28 percent of the sample), the “think for yourself” ideal is an autonomous, fulfillment-seeking, “do whatever you want” approach. Their ideal of American individualism means expressing yourself and being happy. The individual child should be the arbiter of what this happiness is and how to achieve it.

But this was the minority view.  Many other parents seem to have a different understanding of thinking for yourself. 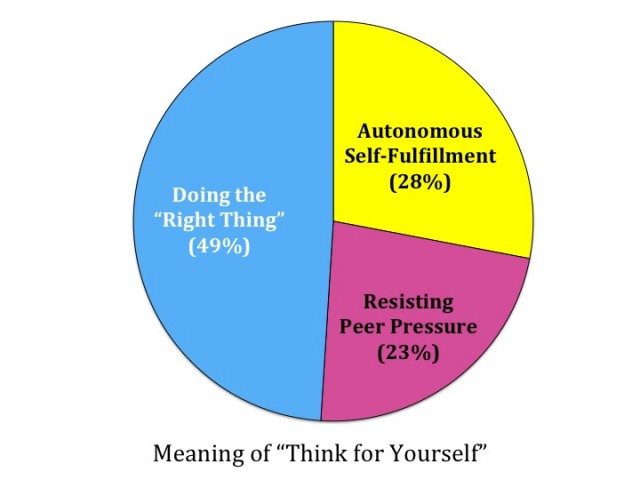 The larger group of parents (72 percent) does not see the child as the final arbiter of good and bad or right and wrong, but rather perceives an external standard to which their children should conform. This majority falls into two related but slightly different categories. For one group (23 percent), thinking for yourself means resisting peer pressure, not following the herd, and not conforming to certain things that parents judge to be negative influences. Many other parents (49 percent) make more explicit their belief that thinking for yourself is a form of doing the right thing—the “right thing” as usually determined by the parent. In this sense, thinking for yourself, to many parents, is more an internalization of parental morality than it is a conventional understanding of autonomy and independence.

Although parents clearly value the ideal of thinking for yourself, most do not appear to want children who are independent of the parent’s own moral system. They want to impart specific knowledge and behavior that their children will follow. In some ways, “think for yourself” means “think like me.” Some might call that obedience or even conformity. Yet parents feel compelled to use the language of autonomy that connotes, at least in the popular imagination, a kind of expressive individualism, distancing themselves from the language of obedience and authority.

Why? Are they confused? Conflicted? Inconsistent?

Tocqueville observed that nineteenth-century changes in family relationships were directly related to larger changes in democratic societies. He was deeply ambivalent about these changes. On the one hand, individualism and equality led to never before experienced freedoms. On the other hand, he worried about vices that might emerge from democratic individualism—tyranny of the majority, mass consumerism, apathy, and atomization.

We want independent kids, but we want them to be like us.

Perhaps contemporary American parents reflect this deep ambivalence: they are steeped in a culture of individualism and feel the pull to value autonomy and prepare their children for it, and yet uncertain about what this means for their own moral authority as parents. We want independent kids, but we want them to be like us.