What God Has Joined Together: Religion and the Risk of Divorce

In church, Christians, especially evangelical Christians, are often told that they get divorced as much as, if not more often than, non-Christians. In the sociological research literature, however, the message is different. Religion is linked to fewer divorces.

Well, which is it? Both sources can’t be right. In answering this question in 2006, I ended up writing a protracted blog series on divorce rates in America, which spawned a published article and a book.

Since then I have gotten about nine years older and the world has changed in various ways. We got our first African-American president and gas prices went back to below $3 a gallon. Americans marry less often and more children are raised without both parents in the home. And the General Social Survey (GSS) collected several more waves of data. So let’s revisit the relationship between religion and divorce rates and see where they are at now.

Using data from the GSS, I took all the respondents who participated in the 2010, 2012, and 2014 surveys (dropping several oversamples). Among them, I selected the respondents who had ever been married, and calculated how many had ever been divorced (or were currently separated). The answer for the whole sample was 45 percent—quite close to the “half of all marriages end in divorce” statistic that is widely passed along.

Then I separated the respondents into seven religious groups, using the RELTRAD classification system developed by Steensland et al. 2000. It divides GSS respondents into seven broad religious affiliations based on the type of religious group they are involved with (e.g., which religious denomination). As shown in Figure 1, there are substantial differences in divorce rates by self-reported religious affiliation. The highest rates are among attendees of historically black Protestant churches and people who have no religious affiliation (i.e., the “nones”). The lowest rates were among Jews, Catholics, and mainline Protestants. In the middle are evangelical Christians and members of other religions like Islam, Buddhism, and Scientology. 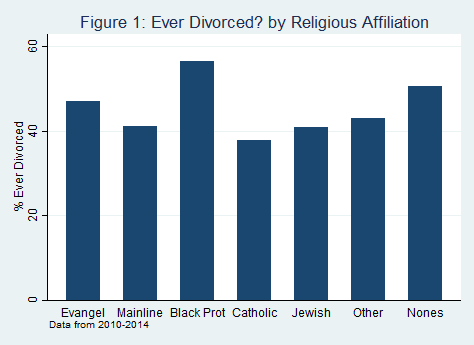 The data in Figure 1 show that it is now the case, as it was nine years ago, that evangelical Christians do not have dramatically high divorce rates. Higher than ideal? Absolutely. Higher than could be? Maybe. But higher than all other Americans? Not at all.

There’s no reason to stop here with the data, for the Common Sociological Era (CSE) started in 1972, when the General Social Survey collected its first wave of data. Figure 2 presents the divorce rates for all GSS respondents since 1972. To make this line smoother, I calculated the average divorce rate for each group separately in each decade and then connected the decade data-points with a line. 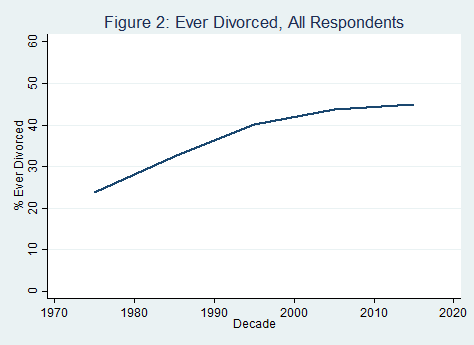 As you can see, the percentage of respondents who had ever been divorced has climbed since the 1970s, with the greatest increase being in the 1970s and 1980s and a smaller increase in the past 15 years. Over this 53-year span, the percentage of Americans who had ever divorced just about doubled, from 24 percent to 45 percent. This is a remarkable amount of change in a short period of time, and it’s significant given the many social, emotional, and financial costs of divorce. 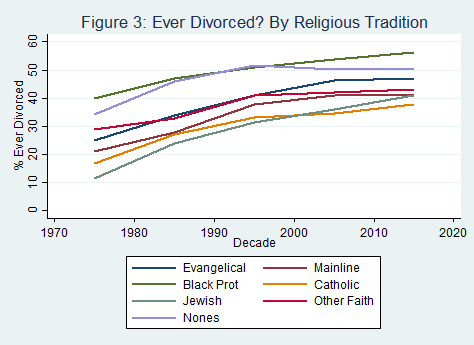 In looking at religious differences so far, I have focused on religious affiliation, but there are other aspects of being religious as well. Two people can be affiliated with the same religion but have very different levels of engagement. Perhaps the most straightforward measure of engagement is attendance rates for religious services. I took all of the respondents GSS and divided them into three groups: those who worshipped weekly or more often, those who attended every several weeks to every several months, and those who attended never or just a few times a year. As Figure 4 illustrates, the differences in divorce rates by religious service attendance are substantial. People who attend religious services every week are 15 percentage points less likely to have ever been divorced than those who rarely attend. Clearly religious involvement matters for one’s chances of a lasting marriage, above and beyond which religious group one is a part of. 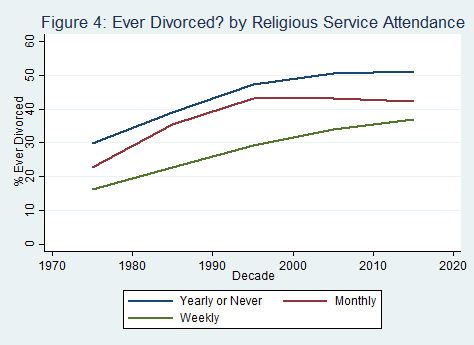 Another pattern is hinted at with the data in Figure 4. Over time, the Christians who attend services monthly are looking more and more like those who attend weekly. In the 1980s and the 1990s, the divorce rate of the monthly group was closer to that of the yearly group. Now, however, it’s closer to the divorce rate of the weekly group. This could reflect new norms in church attendance. Whereas in the past, church attendance meant weekly attendance, now it’s more acceptable to miss some services and to attend several times a month, even if you’re fully committed.

For the coming nine years, I would expect divorce rates to remain level or even decrease. As marriage rates continue to decline, the couples who do get married are those most likely to stay together in the long run, meaning a lower base divorce rate. Also, the divorce patterns of religious groups should continue to become more similar to each other. With the many ways that morals and culture are shared in our society, people might gravitate toward similar approaches to marriage and divorce. So differences in divorce rates are apt to continue diminishing between Catholics and mainline Protestants, between Jews and evangelicals.

Bradley Wright is an associate professor with the Department of Sociology at the University of Connecticut. He blogs at brewright.com on spirituality, well-being, and data.