What Families Should Know About Video Game Addiction

by Sarah M. Coyne
Back to Blog

Bridger* grew up playing video games. He loved the way that they made him feel. Bridger also grew up with an abusive father in a highly dysfunctional family, and video games were his oasis, the place he would turn whenever things got intense at home or he needed to cope with his feelings. Video games started as a harmless diversion, but Bridger found himself feeling compelled to play for longer periods of time. As he began thinking more about the games and became fixated on the next time he could play, he also grew disinterested in other activities he previously enjoyed. His parents didn’t like all the time he was spending on video games, and they had heated arguments over his gaming. Eventually, he started sneaking video game time and even stole money from his mother’s purse to buy a game.

Bridger attended college for awhile, where he met a girl, also a gamer, that he later married. While he tried to attend classes at first, he was tired from gaming all night, and he found it hard to focus on the subject or study for tests. He failed most of his classes and dropped out. He later had a string of jobs but was constantly getting fired for not showing up to work. His wife, who previously shared his love for gaming, began to resent all the time he spent gaming. They had huge arguments, and she threatened divorce a number of times. They eventually had two children, but Bridger would play games when he was supposed to be watching them, resulting in a few times when the toddler wandered outside by a busy street or got into an accident because Bridger was fixated on the game. Bridger loved gaming, but his life was falling apart. He finally decided to seek marriage and family therapy for a problem that had gotten out of hand.

This true story shows how video games can substantially alter the family dynamic in a number of ways. Research has shown that video games can strengthen parent-child relationships1 and marriages when used in the right contexts.2 However, they can also interfere with family life and daily functioning.

Whether video games become pathological or “addictive” in nature is hotly debated in the literature. Several scholars do not believe that media can be addictive. However, a host of other research indicates that video games can become pathological and destructive to family life.3 Thus, it is important for families to recognize when video games are harmless entertainment and when they become a very real problem.

Pathological video game use (also called Internet gaming disorder) has been recognized by both the DSM-V4 and the World Health Organization as serious behavior worthy of future study. Most individuals who play video games are just fine–only around 10% of gamers will develop a pathological problem. There are nine main criteria that families should consider when deciding whether a child or spouse has a true problem with video games (see table below). A total of five of these must be met within a 12-month period. We see evidence of each of these symptoms in the example presented at the beginning of this article. 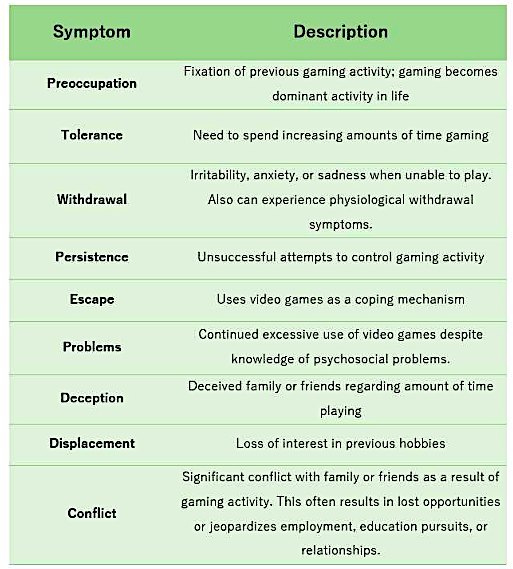 Many things contribute to the development of a video game addiction. After all, this is a multifaceted etiology we are talking about. However, families of origin can play a role, both for good and bad. For example, a number of studies have found that harsh parenting styles and families with high conflict tend to be related to more video game addiction symptoms,5 while warm, responsive parenting has been linked to less video game addiction.6 This also might interact with the child’s physiology. We did a study a number of years ago showing that teens who were highly reactive during family conflict were the most likely to develop video game symptoms over time.7 Setting rules about video games is important but tends to backfire when the rules are too restrictive and instituted in a non-autonomy supportive way.8A few studies have also found that having an insecure attachment to parents also predicts problems with gaming.9 In other words, positive parenting and helping your child feel safe goes a long way toward making them more resilient against addiction!

Video game addiction can also negatively impact the family dynamic. Gaming can cause problems in the parent-child, sibling, and marital relationship. Conflict may be high as families struggle to know how to talk to the individual about their gaming habit. Parents might feel completely overwhelmed, seeing a problem in their child, but not knowing what to do about it. Spouses may resent each other, especially if gaming causes a loss of employment or influences the co-parenting relationship.

Research on video game addiction and marriage is very rare. However, one recent study10 found that spouses of video game addicts reported changes in three areas of their life due to their partners’ gaming habits. First, there were changes in their partner, such as increased isolation, defensiveness, and personal health consequences (such as poor health from neglecting exercise). Second, spouses reported changes in themselves, including increasing anger and resentment toward their spouse. They also experienced growing stress, frustration, and general sadness. Finally, spouses reported significant changes in the relationship and family roles. They reported that gaming decreased help around the house, talking with their children, sexual intimacy, and financial loss due to the money spent on video games and problems at work.

So, what’s a family to do when there is evidence of a problem with video games? Luckily, the past few years have identified a number of treatment strategies that are fairly effective in treating a video game addiction. Most research has focused on Cognitive Behavioral (CBT) therapy (which focuses on changing unhelpful cognitive distortions and behaviors), with some success—particularly when complimented with a CBT group for family members.11 Indeed, family therapy is particularly effective in treatment of the disorder.12 The use of residential treatment, such as the Restart Program specifically designed to treat pathological video game use,13 has also been effective in treating video game addiction. Other treatments include the use of eye-movement desensitization and reprocessing (EDMR)14 and pharmacological treatments that often focus on treating co-morbid disorders, such as depression or ADHD.15

This article is not intended to bash video games or gamers. Video games can be an entertaining and fulfilling form of leisure for many individuals. However, a small percentage of individuals develop significant problems around video games, interfering with their ability to function in daily life. Families would do well to understand the major symptoms around pathological video game use and intervene where appropriate when a significant problem arises. Teaching children to enjoy video games, while still living in the “real world,” is vitally important.

Dr. Sarah M. Coyne is a professor of human development in the School of Family Life at Brigham Young University. Her research interests involve media, video game addiction, aggression, gender, and child development. Dr. Coyne has over 100 publications on these and other topics. She regularly speaks to families and teenagers about using media in positive ways.

1. Ahlstrom, A. “Marital Satisfaction among Married Couples in which One or Both Members Play Massively Multiplayer Online Role-Playing Game (MMORPG),” BYU, 2009.