by Matthew Saxey David Allsop
Back to Blog

You know the scene: the couple on screen starts fighting. Things get heated. Then, suddenly, the tension breaks, and the fight quickly turns into passionate reconciliation. Although movies might not be the best source to learn about healthy relationships, this common cinematic trope may be on to something.

Conflict resolution and forgiveness, it turns out, can influence sexual satisfaction.

Together with Dr. Chelom Leavitt, Joshua Timmons, and Dr. Jason Carroll from Brigham Young University and based on previous research, we identified conflict resolution and forgiveness as two possible variables that may be associated with marital sexual satisfaction.

Our research sought to contribute to these gaps in the literature. The data we utilized was collected from 2,114 mixed-sex, recently married couples living across the United States. These couples, who were randomly selected from all U.S. counties, represented a variety of racial and cultural backgrounds. Wives and husbands in these couples completed surveys containing questions on how forgiving they were towards their partner, the quality of their conflict resolution, and their levels of sexual satisfaction.

We used this data to investigate the extent to which wives' and husbands' forgiveness and conflict resolution were associated with both an individual's own sexual satisfaction as well as their partner's. A modern statistical approach was used to test our research questions.

For forgiveness, our results indicate that wives’ forgiveness showed no significant impact on their sexual satisfaction. However, we found that husbands who are more forgiving tend to report that they are more sexually satisfied, as illustrated by Figure 1 below. 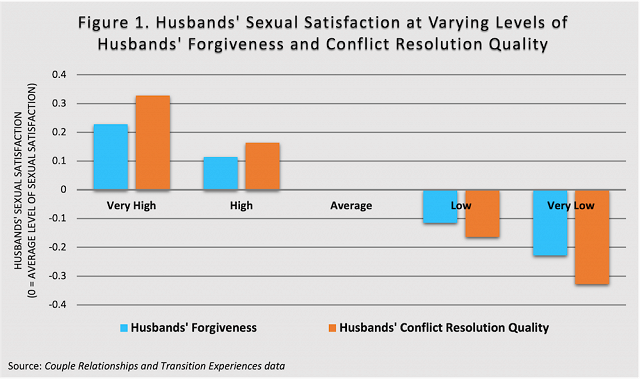 Of note, greater conflict resolution quality was connected to greater sexual satisfaction for both husbands and wives. This finding for husbands is represented above with the orange bars and below for wives with the green bars. 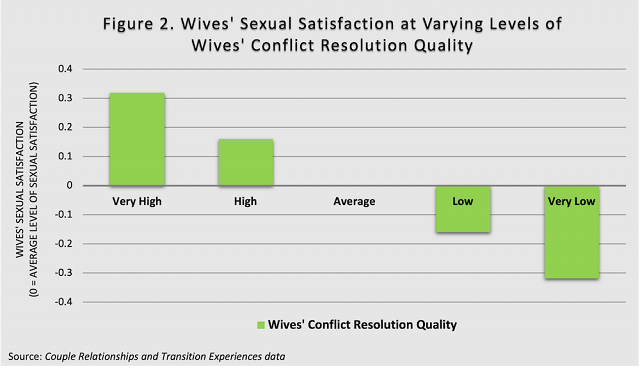 If anything, our findings further the claim that sexual satisfaction is an intricate construct. Many scholars in the past have focused on understanding how things like sexual communication and relationship satisfaction relate to sexual satisfaction. Other variables—including conflict resolution and forgiveness—might also apply. Whether in cinema or real life, couples that resolve conflict well and find a way to forgive each other might also consequently enjoy a superior sex life.

Matthew Saxey is an incoming M.S. student at BYU’s Marriage, Family, & Human Development Program. David Allsop is a Ph.D. student at Dalhousie University in the Department of Psychology and Neuroscience.