Universal Preschool: Be Careful What You Wish For?

by Jay Belsky
Back to Blog

Parents, policymakers, and academics interested in how day care and preschool affect child development often embrace one of two competing—and exaggerated—claims about the childrearing circumstances that are now normative in America: that of non-family care being initiated early in a child’s first year of life on a full-time or near-full-time basis and continuing, in one form or another (e.g., family day care, center care, preschool), until the start of formal schooling.

Critics of such arrangements highlight the fact that developmental risks, like increased rates of insecure attachment and elevated levels of aggressive behavior, have been found to be associated with the extensive use of non-family care in America. Advocates, in contrast, stipulate, usually without qualification, that if the quality of care is good, then children benefit; and, indeed, that it is the limited quality of care available to too many parents in the USA that is responsible for any negative effects on children that emerge in the research literature. Before I address these contrasting points of view, let me make clear that my goal is to challenge current thinking on both the left and the right, which is why the question mark in my subtitle is so important for the reader to notice and appreciate.

Partly in response to a firestorm of controversy that my scholarly writings in 1986-1988 initiated1—or at least fueled—the National Institute of Child Health and Human Development (NICHD) funded, to the tune of at least $150 million, the NICHD Study of Child Care and Youth Development. It recruited more than 1,000 children (along with their mothers) in 1991 from 10 different research sites, and followed them from the first month of life to age 15. Among other purposes, the NICHD Study was designed to investigate the claim that long hours of day care initiated very early in life posed risks to children’s social and emotional development; and, should this prove so, to evaluate the proposition that such negative effects would be due to the poor quality of care that children received, not the quantity of care they experienced across the first five years of life. “It’s quality, stupid” is one way to describe my critics’ argument that the risks I saw associated with early and extensive care three decades ago were solely a function of its poor quality.

As it turned out, NICHD Study’s findings on the effects of day care proved more consistent than inconsistent with my “developmental risk” claim. And they provided virtually no support for the idea that it was poor quality care that accounted for the negative effects of “early, extensive, and continuous” care (initiated very early in life, for long hours, and continuing for many years).2 Specifically, our many research reports revealed that the more time children spent in any kind of non-familial child care, and sometimes specifically in centers, the more aggressive and disobedient they proved to be at two (but not three) and 4.5 years of age, as well as across their elementary school years; and the more impulsive they proved to be at age 15, at which age they also engaged in more “risky” behavior than children who experienced far less non-familial care across their first five years of life. Critically, despite spending millions to carefully measure the quality of care, using methods and measures developed by the proponents of the “it’s quality, stupid” view, the study never found that the quality of care accounted for these quantity-of-care effects. In other words, the problem behavior associated with early, extensive, and continuous care emerged irrespective of whether quality of care was good or bad.

Beyond the NICHD Study

The NICHD Study was not without its limits, most notably its inability to control for all the factors that might affect a child’s development, despite prodigious efforts to do so. Such a limitation makes a brand new report out of Canada so important, especially given the current discussion of universal preschool advocated by the mayor of New York City, the president of the United States, and many others. This 2015 report3 evaluates the effects on children of a major policy change that increased the availability, utilization, and quality of child care in the province of Quebec beginning in the late 1990s. The reform dramatically reduced the cost to families of child care and increased the pay and training of child-care workers. Economists, using state-of-the-art econometric approaches and comparing children in Quebec with those from other provinces, documented numerous negative effects of the universal child care program. Notably, compared with children growing up in other provinces, those growing up in Quebec proved to be more anxious and aggressive at ages two and three as well as from ages five to nine, while also proving to be more hyperactive at these latter ages. Moreover, children in Quebec with increased child care access later had worse health, lower life satisfaction, and higher crime rates than other children.

Just as notable as these longer-term findings are those from an earlier report on the Quebec policy, which revealed that negative effects of the program were most evident among children who enrolled in care at earlier ages.4 Although there is suggestive evidence that the quality of care provided in Quebec was not especially high,5 there is as yet no evidence to indicate that this accounts for the negative effects summarized here.

It would be a mistake, based on what I have written here, to throw the quality-of-care baby out with the bathwater. And this is because there is evidence that quality matters. Indeed, in the NICHD Study, more attentive, responsive, and stimulating care across the infant, toddler, and preschool years predicted enhanced cognitive and language development from age two through age 15. And many other investigations have documented similar results.

But, to repeat, this does not mean—in the NICHD Study, the Quebec Study, or any other that I am aware of—that poor quality of care explains and thus accounts for the negative effects of a large quantity of care. Another piece of evidence suggesting that total dosage of non-familial care across the first five years of life remains important comes from Norway. There, children do not start high-quality, publicly funded child care until after their first birthday, and spending lots of time in child care does not produce adverse effects.6

Whether considering the effects of quality or quantity of care, it would be a mistake to exaggerate their importance, for the effects of both are comparatively modest. It is for this reason that I am astonished when academics draw on the NICHD Study to argue in favor of policies promoting high-quality care, but virtually within the same breath dismiss the findings linking quantity of care with negative effects because they are “small and unimportant”—when the positive effect of quality on cognitive functioning and the negative effects of quantity on social-emotional functioning are the same!

All but forgotten in many discussions about child care is how the effects (both positive and negative) of day care on child development compare to the effects of families, a subject the NICHD Study was well positioned to address. And here the results were clear and consistent, too: family factors (e.g., single parenthood) and processes (e.g., sensitive-responsive parenting) were far more predictive of virtually all developmental outcomes at virtually all ages of measurement than were child-care factors and processes. This is illustrated, first, in Figures 1A and B, which show that while both parenting quality and child care quality matter, the effect of parenting quality is more than three times the size of child-care quality’s effect on pre-academic skills and almost six times the size of child-care quality’s effect on linguistic competence when children are 4.5 years of age. 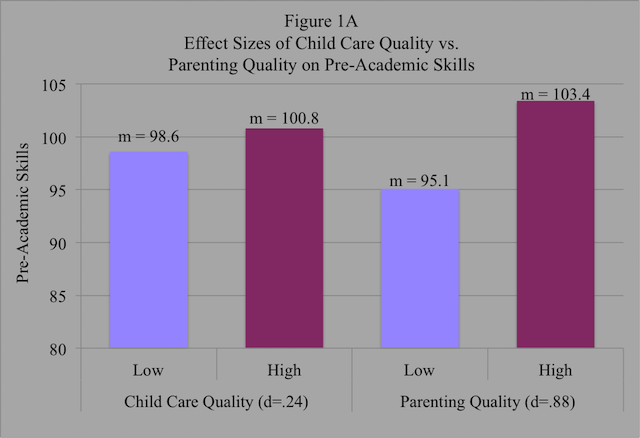 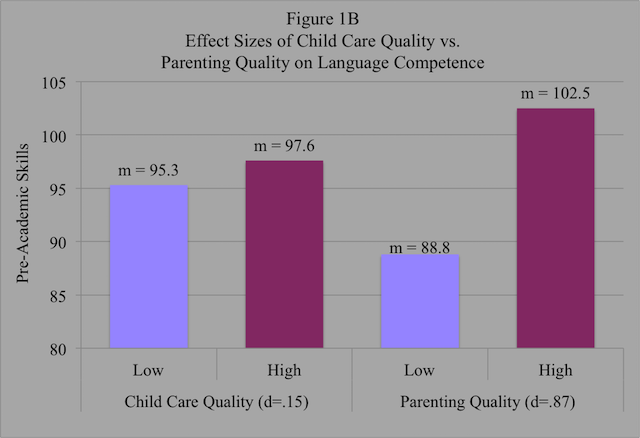 Careful consideration of Figures 2A and 2B reveals more or less the same thing. These figures contrast the effects of amount of exposure to center-based child care and parenting on three different aspects of socioemotional development (measured repeatedly as children aged). Not only are parenting effect sizes larger than those of child care quality (note the differing scales on the y-axes), but whereas parenting proves to be a statistically significant predictor of all outcomes (as indicated by the asterisks), this is not the case for child care. As I tell my students, “if the good Lord came to a fetus and said, ‘I can either grant you a wonderful family but you will experience limited quality child care for most of your early life, or a seriously troubled family and great quality of child care, which would you prefer?’”, the astute response would be to choose the former rather than latter condition. 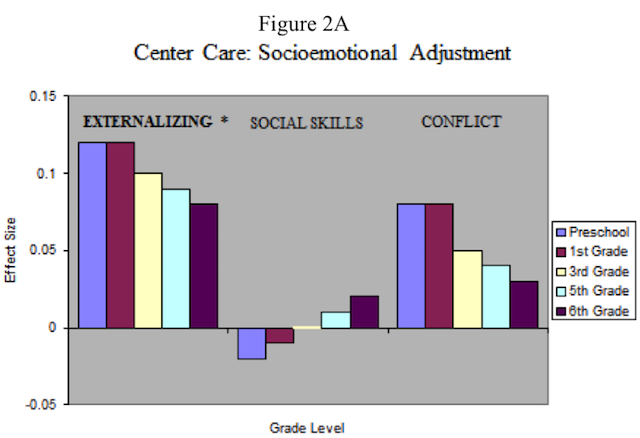 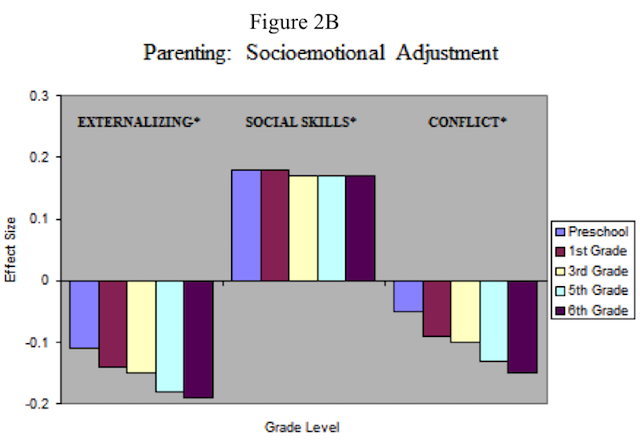 All this does not mean we should disregard the quality of child care. One of my major concerns about how child care is discussed in the policy arena is that the conversations either disregard what children want, only discussing the preferences of parents, or treat children as investment vehicles and thus more or less like a commodity. From the latter perspective, if the costs of quality of care do not yield sufficiently beneficial effects on behavior and development, then one could argue that those costs should not be incurred and we should not worry about providing children with high-quality care.

I look at this issue from a more philosophical point of view. Children never asked to be here. They deserve a decent quality of life, whether or not it benefits them in the short or long term, simply because they are children. Providing high-quality child care should not (only) be about its short- or long-term effects, then, but about a decent quality of life for those children who find themselves in non-family care, whether on an early, extensive, and continuous basis or not.

Jay Belsky is the Robert M. and Natalie Reid Dorn Professor of Human Development in the Department of Human Ecology at the University of California, Davis. He has studied the effects of day care, family influences on child development, and many related topics for the past four decades. Further information on him can be found here.