Trends in the Intergenerational Transmission of Divorce, 1973-2018

I first started doing research on the divorce cycle 25 years ago. At the time, it was already old news that the children of divorce were especially prone to end their own marriages. By examining decades of data, I was able to show that this intergenerational transmission of divorce had abated greatly over time. Put another way, the gap in divorce rates between people from intact families and the children of divorce had narrowed considerably over the years. I further explored this finding in my 2005 book, Understanding the Divorce Cycle: The Children of Divorce in Their Own Marriages, interpreting the declining rate of divorce transmission as evidence that as divorce became more common and accepted, some of its negative effects on children had abated. Since then, I’ve beaten back some methodological criticism and confirmed a decline in divorce transmission using stronger statistical methods.

My analysis of trends in divorce transmission relied on data from the General Social Survey, an annually or biennially repeated cross-sectional survey that has been collected since 1972. Since I first studied divorce transmission, 25 more years of surveys have been fielded. Has the rate of divorce transmission continued to decline? To address this question, I explore GSS data extending from 1973 to 2018. I replicate the data analysis in my 1999 article on the divorce cycle, so readers interested in the technical details of my analysis should consult that piece.1

Just as I did with my 1999 paper, I’ll present both parametric and nonparametric results. The former constrain trends in divorce transmission to a linear decline; the latter relaxes this assumption but is less immune to noise in the data. 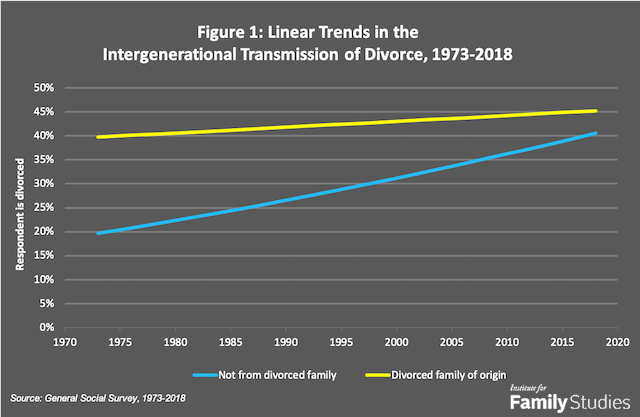 The nonparametric model (Figure 2 below) tells the same story, albeit with more noise in the data. 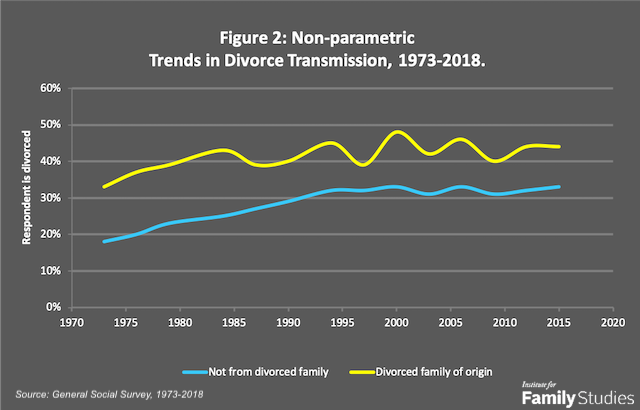 Observant readers might be confused by these results insofar as they suggest a continuously increasing level of divorce. Yet, we also know that divorce rates have steadily fallen since around 1980. What gives? The answer has to do with the structure of the GSS data: it’s a sample of American adults of all ages. Consequently, the average respondent is in his or her 40s, but many are decades older. Many of the divorces recorded in the data occurred decades before the divorce rates started falling in 1980. Prior to that, divorce rates had always increased (indeed, they’ve been increasing for centuries). This accounts for why GSS respondents interviewed in recent years are reporting higher divorce rates.

Prior research, most notably conducted by the sociologist Paul Amato, has explained the intergenerational transmission of divorce largely on the basis of problematic interpersonal skills and reduced commitment to marriage (I review this literature in my 2005 book). These data aren’t really available in the GSS, but there is enough information available to determine the extent to which basic social and demographic differences between survey respondents can explain the relationship between parental divorce and offspring divorce.

My analysis tests whether the following individual attributes can explain the divorce cycle: education, religious denomination, attendance at religious services, and sexual history.2 All are broadly associated with both family structure of origin and marital stability. The results are shown in Figure 3; regression coefficients can be found in the appendix. All of the aforementioned individual attributes can explain about half of the relationship between parental divorce and offspring marital stability. Nevertheless, a statistically significant difference remains, a result consistent with my 2005 book. In addition, none of these measured variables have much of an impact on the declining rate of divorce transmission according to ancillary analysis. 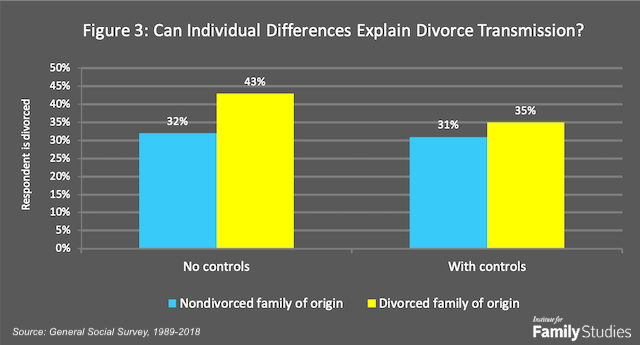 The foregoing analysis tests what researchers call mediation. But what about moderation—the idea that rates of divorce transmission are different for, say, men and women, or people with a college degree? Extensive data analysis reveals little evidence here.

Divorce transmission has continued the decline I first identified back in the 1990s, but it’s not the only adverse consequence of divorce that’s abated in recent years. The relationship between parental divorce and offspring marriage timing is also weaker than it used to be. Divorce isn’t quite as hard on women’s pocketbooks as it once was (see here and here). All of this aside, divorce still has some adverse effects on offspring, and this seems unlikely to change.

1. One difference: since 1994, the GSS has only asked about age at marriage one time, so I’m not able to directly account for marriage duration. Instead, I control for age and its square. Ancillary analysis shows this doesn’t affect the results much. All analyses also control for respondent sex.

2. Some variables can’t be included because causal order can’t be determined with these data; in other words, they may be a cause or consequence of divorce. To a lesser degree, this may be the case with religion and sexual history, so these results should be interpreted cautiously. Income is excluded for these reasons, but it doesn’t matter: per my 2005 book, it doesn’t affect the divorce cycle. Finally, this analysis only includes the 1989 to 2018 survey waves, as data on sexual partners aren’t available before then. 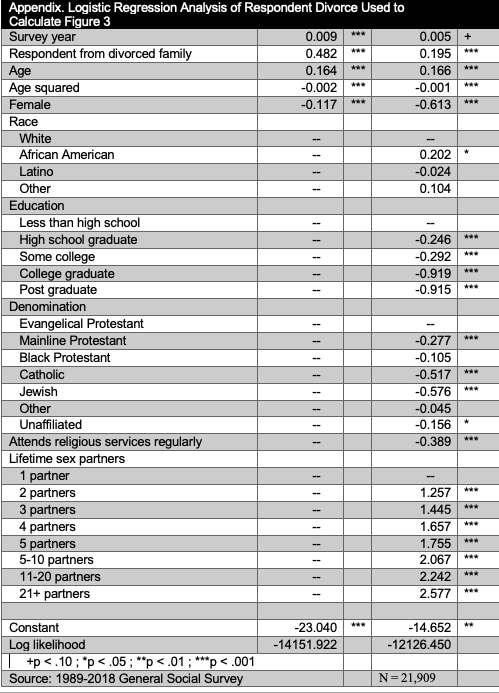