As we often note on this blog, one factor behind the decline of marriage is the declining availability of stable, well-paying work for men who have not graduated from college. For instance, citing Andrew Cherlin's book Labor's Love Lost in a post last month, W. Bradford Wilcox wrote that "without access to decent-paying, stable jobs since the 1970s, working-class men are much less likely to be seen as attractive candidates for marriage, to act in ways that make them attractive candidates for marriage, and to stay married."

A study recently published in Social Problems provides one more piece of evidence for that well-supported statement: using data on thousands of Americans who participated in the National Longitudinal Survey of Youth-1979, Daniel Schneider and Adam Reich find that for men, "controlling for many factors, union membership"—which boosts workers' incomes, benefits, and job security—"is positively and significantly associated with marriage." It's not just a coincidence that labor unions and marriage have had similar fortunes over the past century, as the below charts illustrate.

First, examine this portrayal of the rise and fall of union membership... 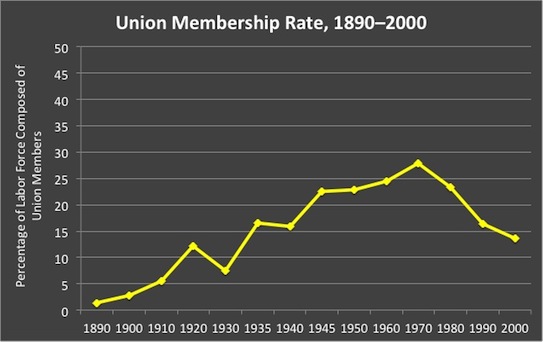 ...and compare it to this chart of prime-age white and African-American men's chances of being married: 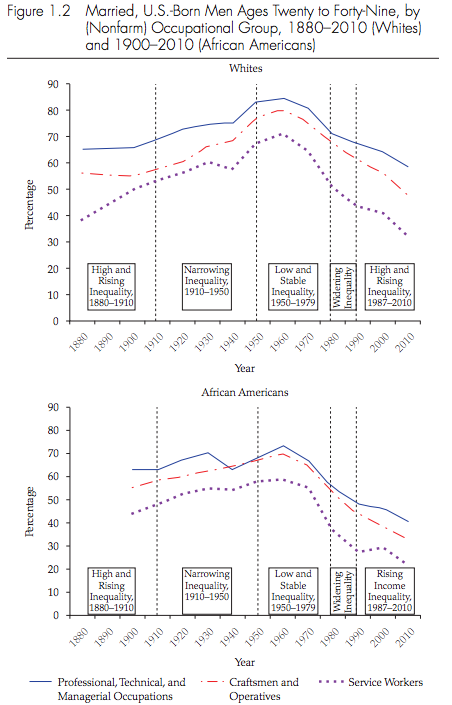 Schneider and Reich followed unmarried men's and women's union membership status, wages, job tenure, health insurance coverage, and other characteristics over time and investigated how those factors were linked to people's likelihood of marrying. (They controlled for race/ethnicity, age, regional residence, gender attitudes, and other traits that can affect propensity to marry.) While union membership did not significantly affect women's likelihood of marrying, it did make men more likely to marry. The researchers attribute that effect (after further analysis) to unions' positive impact on men's income, yearly hours, job tenure, and health insurance coverage.

Turning around the trend of falling union membership rates may not be possible, but until we find some way to improve the incomes and job opportunities of less-educated Americans, and men in particular, there's little hope of restoring marriage.

Our Unequal Polygamous Past

What Does Fat Shaming Have to Do With the Marriage Premium For Infant Health?