The Varying Effects of Family Instability

Family instability is bad for kids. This generalization doesn't apply to every case—children stand to benefit when their mother kicks out an abusive live-in boyfriend, for example—but as a description of how the phenomenon plays out on average, it is not subject to much dispute.

Researchers are still digging into the specifics behind the generalization, however. By what measures and to what extent does family instability hurt kids? Do the number and kinds of family transitions matter, and how so? Are there gender and racial/ethnic differences in how children are affected? How does the impact of family instability compare with that of other childhood disadvantages, such as poverty?

Sociologists Dohoon Lee of New York University and Sara McLanahan of Princeton University investigate these questions in a recent American Sociological Review article. They analyzed longitudinal data (birth to age nine) on some three thousand children from the Fragile Families and Child Wellbeing Study and used a variety of strategies to adjust for selection bias and confounding factors.1 Their measures of children's outcomes, which were assessed when kids were three, five, and nine, fall into in three categories:

Particularly interesting to me were the comparisons Lee and McLanahan made between the effects of family instability, lower maternal education, and poverty on children's outcomes in their sample: 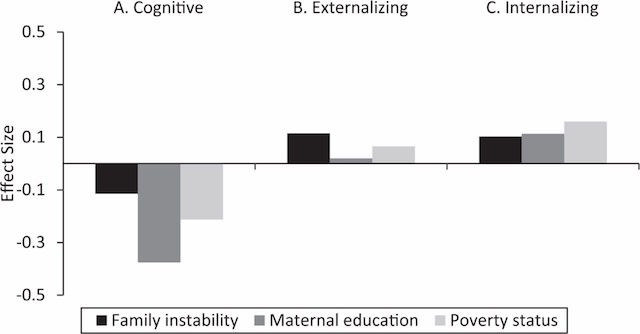 Of course, these results represent an average across the thousands of kids in the study. When the researchers broke down the outcomes by gender and race, there turned out to be a fair amount of variety between groups. Consistent with prior scholarship, "the detrimental effect of family instability on externalizing behavior is more pronounced for boys than for girls, especially for boys who experience multiple transitions from a two-parent family." Yet contrary to previous research, "the exit of a parent from the household has a larger negative effect on girls’ cognitive achievement" than on boys', though the difference was not statistically significant. Also surprisingly, family transitions appeared to lower the internalizing behavior of girls—a finding that Lee and McLanahan interpret with caution ("it is possible that the negative consequences of family instability do not appear among girls until they reach adolescence").

There was also some variety between racial groups. Hispanic children who had experienced family transitions did worse in terms of externalizing behavior than other kids, and on internalizing behavior, white children were more affected than others when they exited a two-parent family, while Hispanic kids were more affected when entering a two-parent family.

Although some scholars have argued that the number of family transitions matters more than the type of transitions, Lee and McLanahan's data suggested the transition type (divorce versus remarriage, for instance) does make a difference.  They conclude that "generally speaking, transitions out of a two-parent family are more harmful to children than transitions into a two-parent family." Would that findings like these weren't relevant to so many families.