The 'Second Demographic Transition' Is Here

In 1986, two Dutch researchers advanced a provocative hypothesis: many societies were undergoing a “Second Demographic Transition” that would lead to durably low birth rates and high degrees of diversity in family status (i.e. having children within marriage would be less typical). The theory was provocative because most pillars of the demographic establishment, like the U.N.’s Population Division, believed that birth rates would stabilize in the long run around replacement level, and that out of wedlock births were a temporary feature of poverty that could be alleviated with better public programs.

Experts on many sides were not only resistant to the idea that birth rates might remain low, but especially that low birth rates were a fundamental feature of developed societies, as it seemed to imply that such societies might be unsustainable. Thus, even if some might have conceded that birth rates might be low for a while, they were resistant to describing this in a way that implied that all or most societies would eventually experience this second “transition,” much as almost all societies today have experienced the “first” transition (falling child mortality and even-more-steeply falling fertility).

But this month, one of the original researchers, Ron Lesthaeghe, has published a paper reckoning with how this theory has held up over the last 35 years. And the verdict is: proponents of the Second Demographic Transition theory were basically correct in their predictions: the model has been useful for understanding social changes since 1986, and alternative theories have not held up. In other words, virtually every society in the world is likely to move towards very low birth rates eventually, unless there is some unforeseen change in deeper social processes.

In his new paper, Lesthaeghe tackles three theories about changes in birth rates: tempo, human development, and gender equality. All three theories offer “optimistic” explanations for falling birth rates. One of the most commonly cited, the tempo theory suggests that birth rates haven’t permanently fallen; it’s just that births are coming later, and so during the time period when births are being pushed later, birth rates may appear to decline. Virtually any article about birth rates in America will prominently feature one sociologist or another with a quote talking about how women are delaying their childbearing. This month, Newsweek published a debate between me and Brad, and Marina Adshade about low birth rates, in which Adshade argued that timing effects were extremely important. The narrative that falling births are basically a reflection of delay, and implicitly that they can be “recuperated” later, is widespread in public commentary on fertility.

But Lesthaeghe and others think this characterization of “delay” is misguided. Lesthaeghe has shown in prior research that the “recuperation” in fertility needed after age 30 is preposterously large. The 2001 paper is worth revisiting. In it, Lesthaeghe had access to completed fertility for women in Austria, Switzerland, France, East and West Germany, and the Netherlands through the 1957-1961 birth cohort. But since that time, data has become available up to the early 1970s birth cohorts in those countries. Lesthaeghe predicted that, contrary to claims that these women would use their newfound wealth and equality to achieve their fertility goals later in life, women born after the 1957-1961 cohorts would have considerably lower fertility.

And he was right! 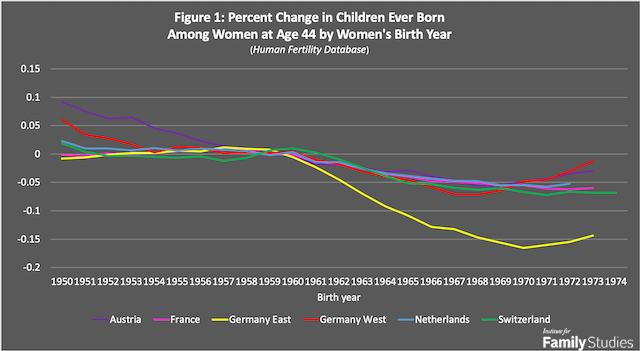 Completed fertility for women born in the 1950s was relatively stable in all of these countries except Austria. And yet after the 1960 cohort, exactly as Lesthaeghe predicted, completed fertility began to fall in every one of these countries. Now, for women in West Germany, there does appear to have been some meaningful return to prior levels for the very latest cohorts, but not in Switzerland, France, or the Netherlands. Those arguing that lower fertility rates are just about tempo effects must wrestle with the fact that, around the developed world, while there are exceptions for limited times, completed fertility rates are falling at a brisk clip.

Furthermore, brand-new research on the Nordic countries shows that even in these countries were birth rates have historically been higher, birth rates at older ages have not been enough to make up for lost births in the 20s and earlier. Relatedly, I recently showed that childlessness in the United States is likely to reach unprecedented levels. It’s also possible to guess at what future completed fertility rates will look like using current data on achieved fertility, and trends in rates of age-specific birth rates.

But there’s another way to check how large tempo effects may be. The Current Population Survey regularly asks women how many children they have ever had. We can just look at what answer women of a given age gave in the past, and then follow up with the same age cohort of women 10 years later. So, for example, we can look at women who were age 35 in 2000, and then compare them to women who were age 45 in 2010. The change in births ever had should provide a good sense of the extent of fertility recuperation.

Since the 2002-2012 period, fertility realizations have fallen for every age group. Yes, teen births have fallen, but so have births among women in their 20s, 30s, and 40s. Fertility “recuperation” is more myth than fact at this point: “delays” in younger fertility are not being recovered by higher fertility later in life.

Lesthaeghe also takes on two related theories. Demographers of various stripes have argued that the first demographic transition reduced fertility due to lower child mortality, but that very high levels of human development will enable human flourishing and, thus, higher desired fertility. A related argument—which Lesthaeghe separates but which I’ll address at the same time—suggests that birth rates are low in developed societies because, while women achieve equality in the public sphere and perhaps workplaces, they still aren’t equal at home, where they face burdensome “second shifts.” In both theories, the supposed answer to low fertility is to double down on progressive cultural priorities: men need to do more laundry, women need higher labor force participation, and welfare should be more generous!

But these findings were always spurious. They rested almost exclusively on the experience of Nordic countries. New research shows that in longer and more complete time series of gender equality and fertility, achieving that “last mile” of gender equality doesn’t seem to achieve very much in terms of birth rates. The theory that “advances in human development can reverse fertility declines” has also failed to pan out.

The figure below shows the total fertility rate and human development index (HDI) score for every country that has crossed the 0.85 HDI threshold since 2000 (as threshold advocates of this theory think is important), and which had already completed its first demographic transition. HDI measures a broad spectrum of different human-wellbeing related indicators like equality, health, and economic prosperity. And while advocates have adamantly asserted that more development will “reverse” fertility decline, what appears to happen in reality is that fertility bottoms out around 0.85 HDI, and then it tends to move in a more-or-less random way beyond that, with some countries rising, some falling, and no clear trend.

Finally, the Second Demographic Transition theory argues that low fertility will be accompanied by increasing family diversity, which is shorthand for more cohabitation and more children born outside of wedlock. The data on this is clear. As I’ve shown here at IFS and elsewhere, unwed childbearing has indeed risen by a massive amount in the US and in other countries. OECD data shows massive increases in unmarried parenting across many countries, as shown in figure 4.

These increases are largest in western countries, but even Japan has seen a small increase. Lesthaeghe cites new evidence showing that in fact cohabitation is rising very rapidly in Japan, Korea, Taiwan, the Philippines, and even China. Low shares of births outside of wedlock in these countries are not because there has been no rise in the diversity of family models, but because these countries have strong stigmas against unmarried childbearing. Indeed, married childbearing in Japan is quite similar to higher-fertility countries. Most of the low birth rates in Asia can be explained by low fertility among unmarried women, but this isn’t because traditional marital models are surviving. Approaches to marriage and family are changing just as fast in east Asia as elsewhere; however, different attitudes towards work and education, as well as different policy environments, have discouraged unmarried childbearing.

The Second Demographic Transition has held up well as a theoretical model of the last 35 years. It seems likely to be an accurate model over the next 35 years as well. Some countries are trying hard to buck the trend through active pro-natal policymaking, but there have been few major successes on this front yet.

But one of the major obstacles to productive policy discussions of low fertility has been widespread expert opposition to the idea that low fertility might be durable: low birth rates surely just reflected tempo effects or would be resolved by even more social progress. The idea that birth rates might be low for a very long time, and that addressing this might require some kind of intentional thought and planning by policymakers, has been anathema for too long. With increasing evidence that more optimistic theories are wrong and the Second Demographic Transition is basically a correct description of reality, hopefully policymakers will take the challenge before them more seriously.