Family life in America is changing: marriage is increasingly being postponed, cohabitation is rising, more young people are living with parents (or grandparents), and childbearing is falling. Emerging from all these trends is one particularly striking trend: rising childlessness. Births postponed ultimately lead to births foregone entirely. And indeed, the main cause of declining fertility in America is increasing childlessness at all ages (or, put another way, declining first births, rather than declining second or third births).

This rise in childlessness hasn’t showed up yet in the headline data used to measure ultimate family size, and so much of the public commentary on the question remains fairly blithe and unconcerned. Major research organizations like Pew continue to point to the fact that women in their forties have had relatively high “completed fertility,” which is a term for how many children they have ever had. In a recent article in Rolling Stone, sociologist Philip Cohen is even quoted as saying “we shouldn’t care that much” about declining births. However, there is reason for concern. Figure 1 below shows the long-run history of fertility in America, both in terms of the current total fertility rate (a naïve extrapolation of how many children women will have if birth rates in that year are stable over time) and also how many children women who were 25 in that year ended up actually having by the time they were 50. 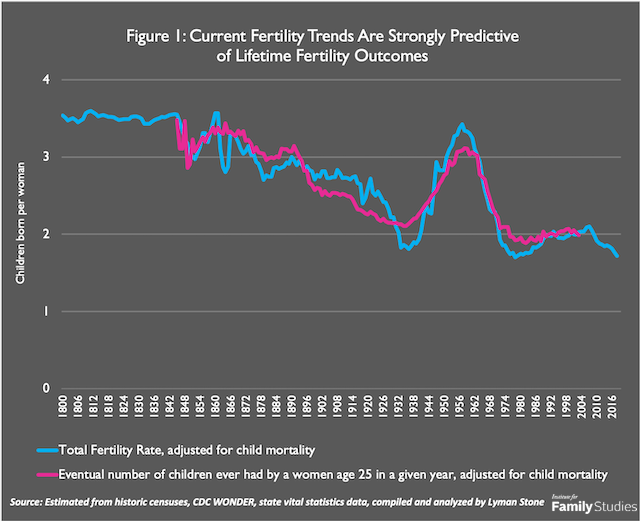 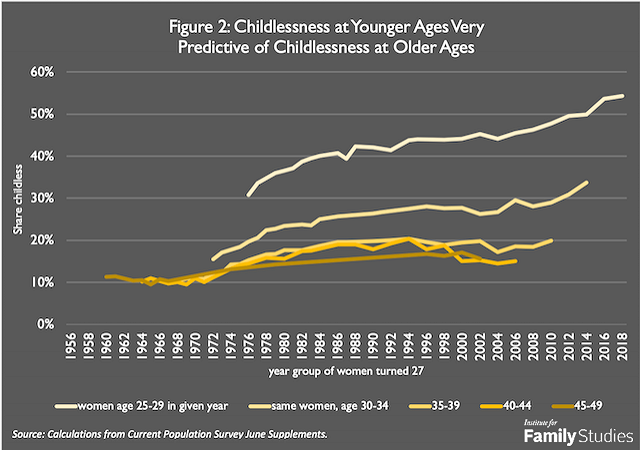 But we don’t have to guess about this. Combining data from the Current Population Survey on the population of women by how many children they’ve had with vital statistics data on births by birth order, we can directly estimate how a childless woman’s odds of having her first birth are changing for women of different ages. Figure 3 shows the share of women with no prior births who had a first birth in 2007, 2010, 2014, and 2018. 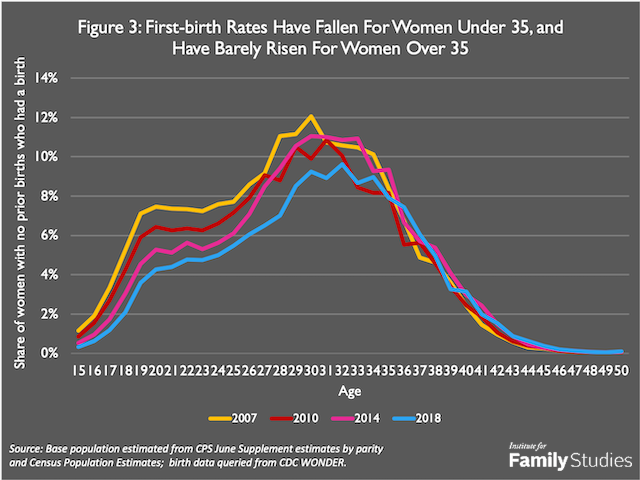 Declines in first births have been very large and extend all the way up to women in their mid-thirties. Meanwhile, there have not been appreciable increases in first birth rates among women in their late thirties and into their forties. Lost first births at younger years are not being made up in later years. The argument that childless women are going to “catch up” and that the share of women who are childless will not rise in the future is almost certainly wrong.

However, this childlessness isn’t necessarily a new thing. The figure below shows the share of women in each year of birth who survived to at least age 44 without having any children, with a forecast for years without complete data. It also shows the share of women who reported not wanting any children in the General Social Survey, or who gave non-numeric responses like, “A woman should have as many children as she wants,” arranged by the birth year of the survey respondent, to provide comparability of actual childlessness. 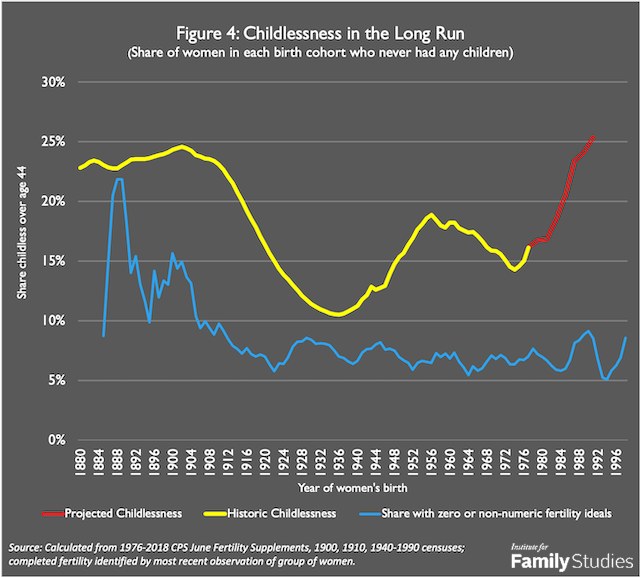 Childlessness was fairly common in early America. The reasons for this high rate of “spinsterhood” are numerous and debated by historians, but it’s worth noting that the share of women born in the late 19th century who reported desiring childlessness or rejecting the idea of a prescriptive fertility norm was higher than it is today.

By the early 1900s, this began to change. Various forces may have driven this trend, including changing sexual norms during the 1910s and later, exposure to the “baby boom” years, and the decline of low-fertility-ideals as shown above. Women born in the first few decades of the 20th century were much less likely to be childless than their mother’s generation. But then childlessness rose again for women born until 1955. That would be women mostly having children between 1950 and 1980, and so this rise in childlessness can be attributed to rising age of marriage, better birth control, and falling birth rates generally. Finally, the decline in childlessness for women born in the 1960s and early 1970s is largely driven by a sharp increase in teenage motherhood, especially among African American moms, as well as the arrival of many immigrant women in the 1960s to the present.

However, as teen birth rates have fallen (thankfully), the decline in childlessness seems to have stopped. Young people are taking longer to settle down, having a hard time getting the stable jobs and housing situations that enable family formation, and having sex less frequently. While declining teen pregnancy is a good thing, first birth rates have declined for women into their thirties, and there has been no meaningful increase in such rates among older women. This is not a story about postponement, but about poor economic conditions and uncertain relationships leading more and more women to miss out on having children they want to have.

But it gets worse: childless rates will reach extraordinary levels in international comparison. American women born in the 1990s will probably be as likely to be childless as Japanese women who were born in the 1970s, the women whose low birth rates gave rise to the advent of modern concerns about “ultra-low fertility” of demographic trends. 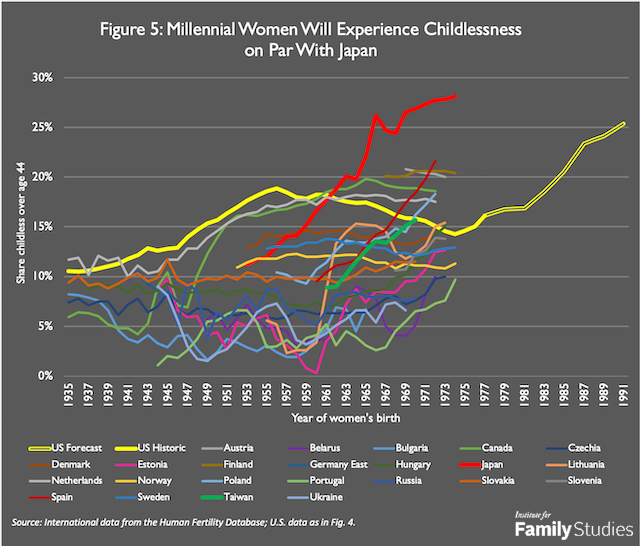 The extremely low fertility scenario that has bedeviled east Asian societies for the last few decades appears, after much delay, to be arriving in America. Rising childlessness is a particularly tough challenge for policymakers, since it’s not usually driven directly by financial concerns. Most childless people fall into one of four categories: unmarried people, people who simply don’t want any children, or people who got married quite late thus possibly have difficulty conceiving, or people who have a spouse with children from a prior union. Aside from the fact that the first child is the most expensive one, and thus hardest for financially-targeted policies to nudge, three of these reasons (infertility, spousal selection criteria, and fertility preferences) for not having children are areas policymakers can’t really touch, for either practical or ethical reasons.

Only the timing of marriage is something policymakers can reasonably nudge. And there’s a lot of work to be done there, as I’ve argued in testimony before the U.S. Congress. However, even with improved policies helping young adults achieve their marital desires sooner, these trends are “baked in” for at least the next decade or so. As a result, this forecast of higher childlessness is extremely likely to become reality, even if wise policy choices might be able to bend the curve backwards for the generation of women born in the 2000s or 2010s.