The Majority of U.S. Children Still Live in Two-Parent Families

After a steady decline since the 1970s, the share of American children who live with two parents has leveled off in the past two decades. Today, nearly 7 in 10 children live with two parents, and this share remains flat since 2000.1 However, unlike their peers growing up a couple of decades ago, children under age 18 today are more likely to live with parents who are living together but not married. 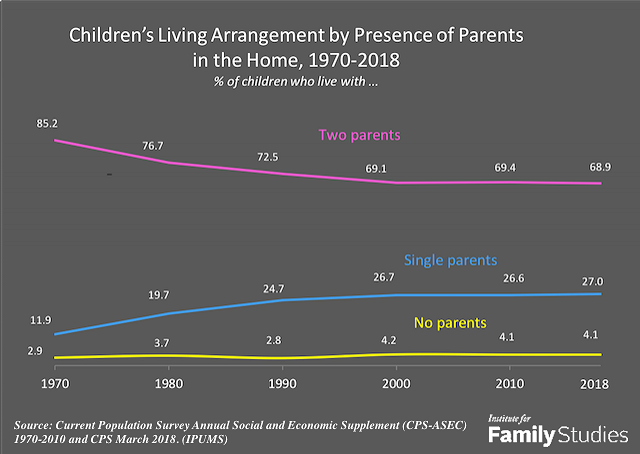 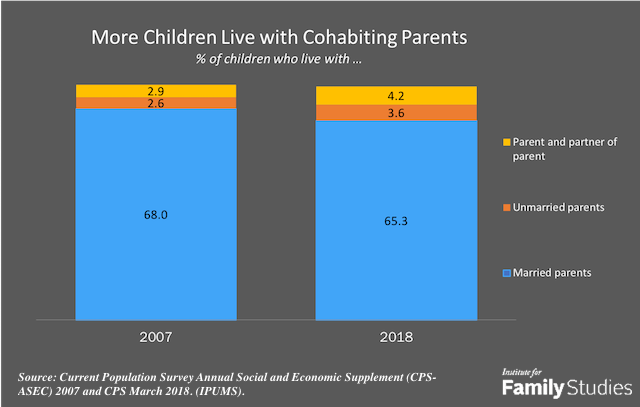 Taken together, an estimated 5.8 million American children live with cohabiting parents in 2018, which accounts for about 8% of all children under age 18. Among these children, 2.7 million live with their own two parents who are not married, and another 3.1 million live with one parent and that parent’s live-in partner (who is not biologically related to the child). 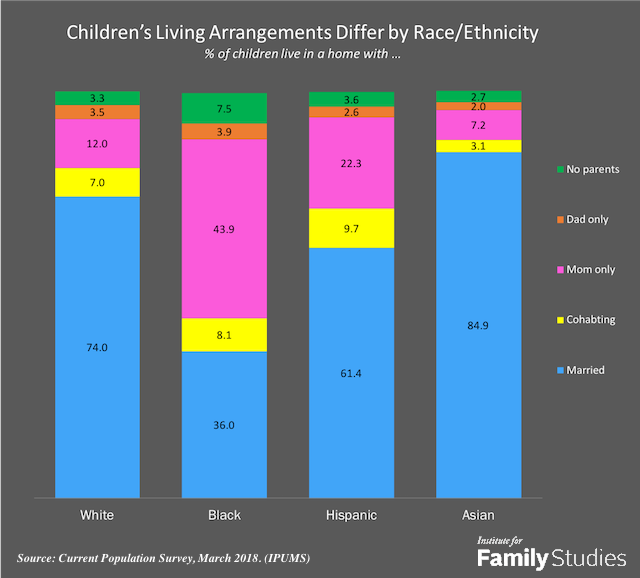 Notes: Based on children ages 0-17. Cohabiting parents include both parents and one parent w/unmarried
partner. Whites, blacks, and Asians include only non-Hispanics. Hispanics are of any race. Asians include Pacific Islanders.

On the other hand, a small proportion of American children (4%) live in a home without either of their parents. They could be living with grandparents, relatives, or be in foster care. About 8% of black children are in this type of living arrangement, and the share among children of other races and ethnicities is lower, averaging around 3 percent.

Children’s living environment while growing up also varies by parents’ education levels. It is well-documented that a parent’s higher education, especially a mother’s, is associated with better child outcomes. One of the reasons is that highly-educated and economically better-off adults are more likely to marry and stay married, which provides a relatively more stable environment for their children’s development. 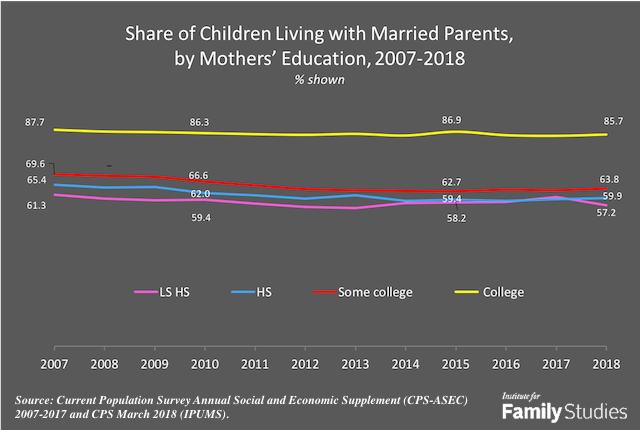 Notes: Based on children ages 0 to 17 who live in a household where mom is present.

The growing share of children living in a cohabiting family, whether with their own parents or with one of their parents, adds another layer of complexity to American families today. Children can struggle in adapting to parents’ new living arrangements and navigating the relationships between their parent, his or her partner, and their other parent who does not live with them. Cohabitation is also associated with greater family instability, as most cohabitations in the U.S. are short lived. And family instability, in turn, is strongly linked to poorer child outcomes. Nevertheless, more and more children today find themselves living in a cohabiting family—at least for a time.

Wendy Wang is director of research at the Institute for Family Studies and a former senior researcher at Pew Research Center.

1. Based on the Census Bureau’s Current Population Surveys. Parents could be either biological, step, or adoptive parents. Two parents can be either same-sex or opposite-sex couples.

2. Based on children living in households where the mother is present. Children who live with a single dad or who live without their parents (about 9% of children in 2018) are not included in the analysis.