It shouldn’t be contentious. Yet somehow it is.

You might imagine that the way parents behave towards each other and how they behave towards their children ought to be a major factor in how kids develop as teenagers. After all, parents are the most important people in their children’s lives. They see them at close range more than they see anybody else. They are the people who made them, who care for them the most, who act as primary role models, who spend the most time with them, and who their children want most to love them.

So, it makes sense that if they treat each other well and show their children love and safe boundaries, then the odds are that most kids will turn out fine. If parents fall short on any of these areas—for example, if they show contempt for one another, fight or ignore each other, can’t make their relationship work so they split up, or can’t show their kids the love and safe boundaries they need—then it makes sense that the odds start building up against their children.

How children see the world is bound to be framed first and foremost by what they experience at home.

And yet the prevailing view in government circles is that whether the parents are married or not, or stay together or not, isn’t important. What’s most important, apparently, is whether they fight.

Parental conflict is certainly unpleasant and well known to have unpleasant consequences for children. Yet previous research by the Marriage Foundation has shown that only 2% of parents quarrel a lot and only 9% of parents who divorce quarreled a lot before they split up. These numbers alone suggest that parental conflict is an insufficient explanation for the prevalence of teenage problems. In any case, children are often better off out of a high conflict relationship.

But is parental conflict really the only problem?

This month, the Marriage Foundation has released a new paper, co-authored by myself and Professor Steve McKay at the University of Lincoln, that blows this narrow view out of the water.

We wanted to investigate the influence of family background and upbringing on teenage mental health. To do this, we used the rich data source of the UK Millennium Cohort Study that surveyed some 12,000 mothers soon after their children were born—most in 2000 and 2001—again several times thereafter, and most recently when their children reached age 14.

In our analysis, we concentrated on the first and last of these surveys, looking first at whether the mothers were married or cohabiting when their child was born, how happy they said they were in their relationship with their husband or partner, and at their age, education, and ethnicity. Then we jumped forward 14 years, looking at whether the parents had stayed together as a couple or not, and at how well their children were faring in terms of mental health.

To measure mental health, the parents were asked 25 questions in a “Strengths and Difficulties Questionnaire.” These questions cover potential problems with emotional well-being, hyperactivity, conduct, and peer relationships. Each of these has a threshold score that is considered to represent a high or very high level of problems.

Here is what we found:

1. Mental health problems among teens in the UK are even more prevalent than is currently reported. Altogether 27% of both boys and girls are deemed by their parents to have a high or very high level of problems in any of these areas. That’s higher than is usually reported because other researchers look at a total difficulties score. The Office for National Statistics, for example, says that 12% of children in the UK have mental health problems on this basis. But when 16% of girls have emotional problems and 16% of boys have peer problems, as we found, this would seem to understate the problem. It does. 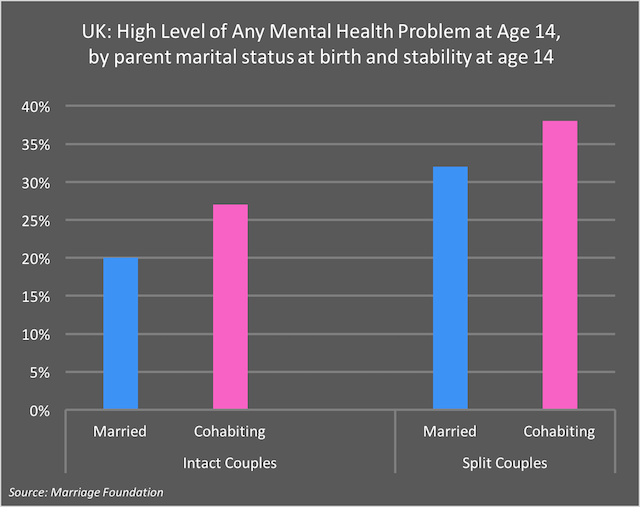 4. Our finding that having parents who were married when the children were born means fewer problems when they became teenagers—even among parents who stay together—is a completely new finding. Previous research with the same children when they were aged five and seven suggested there were no differences. By age 14, the children appear to notice something different.

Overall, what these findings show is that all aspects of family life influence how teenage children turn out. Whether parents are married or not, whether they stay together or not, or how happy parents are in their relationship, these all make a difference that is independent of all the others.

There were a couple of extra findings that added even more color:

All in all, our analysis highlights what most sensible people might expect: the way parents structure their family plays at least as important a role in teen well-being as how parents relate to each other.

Britain already has one of the world’s highest levels of family breakdown. Nearly half of our teenagers are not living with both natural parents.

Our new study shows beyond doubt that this matters. The next generation of children won’t thank us if our policy-makers and their advisors continue to close their eyes to this reality.

A Table for One