The Four Cs of Pornography in Couple Relationships

It is no secret that pornography has become commonplace in our modern society. While sexually explicit material is not a new phenomenon, widespread access to the internet, the advent of “smart” technology, and the rise of social media have contributed to a modern culture that is saturated with pornographic content. Recent estimates suggest that nearly 80-90% of young adults report some exposure to pornography1 with the average age of first exposure often between 10-13 years old.2

Despite pornography viewing being an increasingly common behavior, we know very little about its potential impact on romantic couples. The large proportion of the teen and adult population who report using pornography all but guarantees that most romantic couples must navigate, either openly or privately, the role pornography plays in their relationships. It remains unclear how couples are navigating these trends—particularly since we know there are well-documented differences between men’s and women’s use of pornography.3

We recently released a report detailing our preliminary findings from a new survey entitled the National Couples and Pornography Study. This study was fielded in 2020 and was sponsored by the Wheatley Institution and the Austin Institute. Our study consists of two related samples that were recruited from across the United States based on quotas for age, race, education level, and geographic region aimed at creating a demographically diverse sample. The first sample consists of 3,750 individuals who are in committed heterosexual couple relationships. The second sample consists of 713 matched heterosexual couples (1,426 individuals).

As we noted, large and consistent gaps continue to exist in the frequency and type of pornography viewed by men and women. One obvious issue with this gap in behavior is that it sets up a high probability that partners may hide behavior they think their partner may not accept or approve. We explored awareness of partners’ pornography use to see if romantic partners had a sense of the amount of pornography their partner was using. 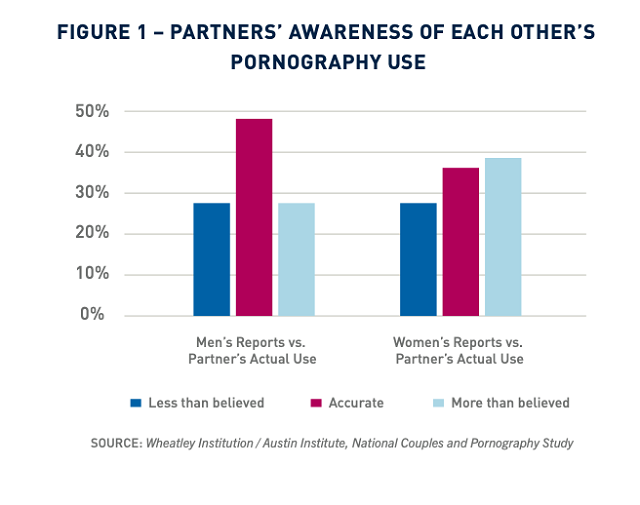 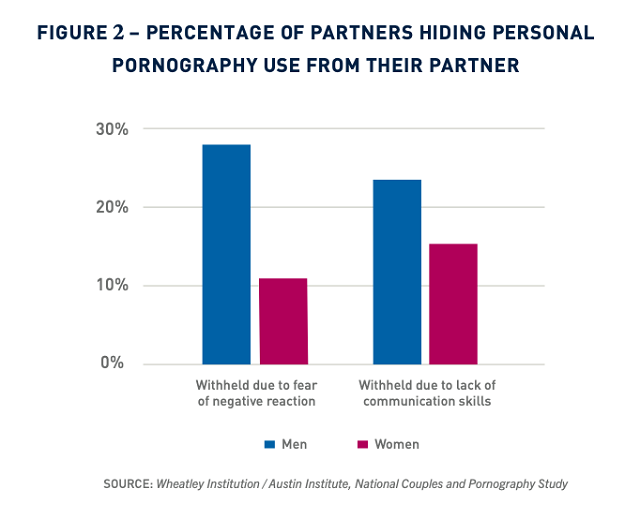 With clear differences between men and women in both their acceptance and use of pornography, what is even less clear is how these differences affect couples—and how partners are negotiating and making sense of such differences in their relationship. As we just noted, it appears that many partners and spouses are unaware or misinformed about the pornography use of their partner. Does this suggest that couples are rarely talking about pornography openly? Such lack of communication may become a key factor in understanding any potential relationship quality differences that do emerge between couples based on their pornography viewing profiles. 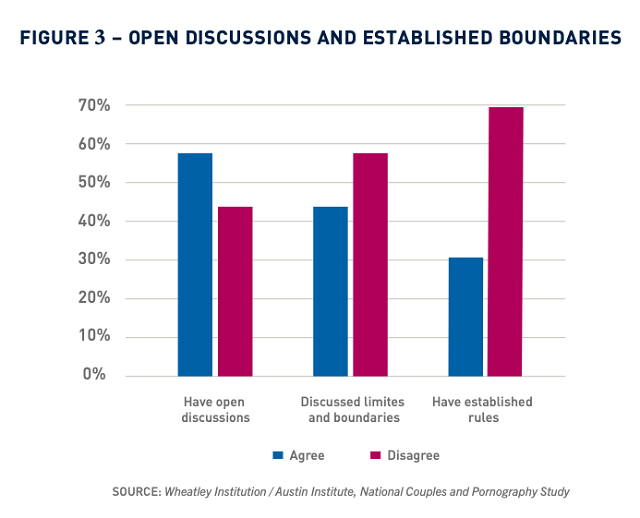 Further examination of the specific fears and anxieties romantic partners may have about pornography use within their relationship revealed several notable trends. Even though the majority of individuals reported a general acceptance of pornography use by adults, our analyses suggested that accepting something and attitudes about its potential effect in one’s own personal life are two different things. When asked specific questions about their anxieties and fears about pornography use, such fears appeared to be almost as common among romantic couples as was their general acceptance of pornography.

It also appears that many women also worry about their male partners hiding their pornography use, a seemingly justified concern given the amount of concealment reported by male partners. Figure 4 shows that almost 1 in every 3 dating women reported they were worried that their partner was withholding some details about their pornography use. Married women and men were generally less anxious about concealment behaviors, but approximately 1 in 4 still reported some worry about this issue. 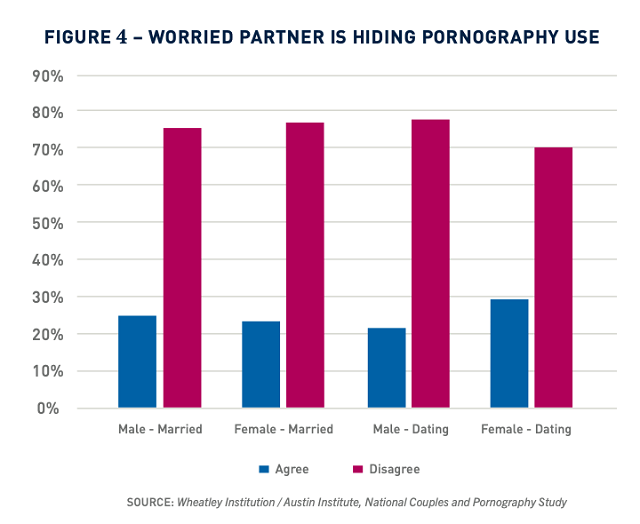 Figure 5 shows that 20% of dating and married men agreed that they feel unable to stop their pornography use. Women were dramatically less, with only 4% of dating women and slightly less than 3% of married women reporting the same worry. However, some women did report that they are worried about their partner’s use, with approximately 1 in 5 dating and married women reporting they worry that their partner cannot stop watching pornography. This figure closely matches the number of men who worry about their own self-control related to pornography use. 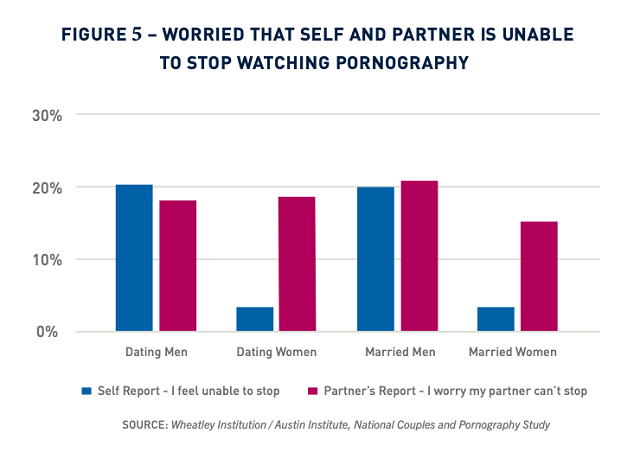 Not surprisingly, conflict related to pornography use was much less common among couples where neither partner viewed pornography, with only about 1 in 10 of both men and women reporting that pornography has caused conflict in their relationship. However, when pornography was consumed by one or both partners, the opportunities for pornography to cause couple conflict rose steeply. The number of couples experiencing conflict doubled when one or both spouses reported using pornography.

Relationship experts have long recognized that relationship quality is a result of partners developing a secure attachment with each other, where each partner trusts that the other will be physically, emotionally, and psychologically responsive to his or her needs. Behaviors that are interpreted as disrupting or eroding this trust will have a significant negative impact on couple communication, intimacy, and satisfaction. Perhaps that is why our study also found that couples where both partners do not consume pornography have the highest levels of relationship stability, commitment, and relationship satisfaction.

2. Sinkovic, M., Stulhofer, A., & Bozic, J. (2013). Revisiting the Association between Pornography Use and Risky Sexual Behaviors: The Role of Early Exposure to Pornography and Sexual Sensation Seeking. Journal of Sex Research, 50, 633-641.