The Downside of Living Alone

You've doubtless heard about how many young adults are living with their parents these days. "Older Millennials Keep Moving in With Their Parents," says Slate. "It’s Official: The Boomerang Kids Won’t Leave," reports the New York Times magazine. "Some Millennials—and Their Parents—Are Slow to Cut the Cord," notes NPR.

Though real, that trend is somewhat overblown because, as The Atlantic's Derek Thompson pointed out last year, the Census classifies college students living in dorms as living at their parents' home. In all the talk about young people's living arrangements, however, reporters have largely overlooked another significant trend: the gradual rise over the past century in the percent of Americans who live alone.

As Rose M. Kreider and Jonathan Vespa have documented in a new working paper they presented at the latest annual meeting of the Population Association of America, the percent of Americans living alone rose from a miniscule 1.9 in 1910 up to 13.7 in 2010. During the same period, the percent living with relatives rose and then fell, while the percent living only with nonrelatives did the opposite, as Kreider and Vespa's below figure illustrates. (The category "living with nonrelatives only" has changed quite a bit, they explain: it once meant living as a boarder, renter, or employee in another family's home, while today it most commonly refers to living with an unmarried partner.) 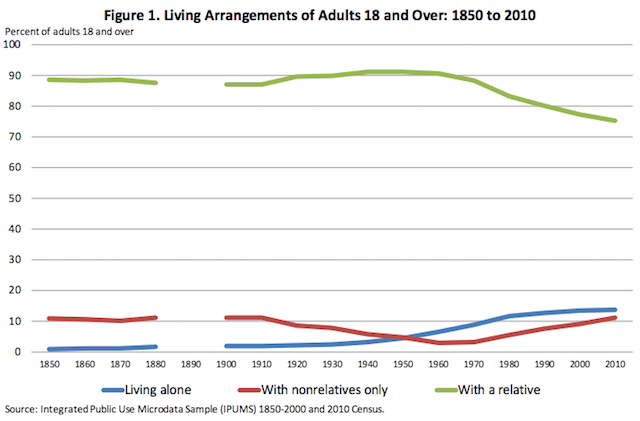 Trends in living arrangements over this period vary quite a bit by age and gender. Among younger adults, the rise of living alone has leveled off somewhat: Those between 18 and 34 years of age are about as likely to live alone now as they were in 1980. Over the same span of time, the middle-aged (35 to 64) have grown just slightly more likely to live solo since 1980. The proportion of 18- to 64-year-olds living alone, male or female, never exceeded 15 percent between 1850 and 2010. 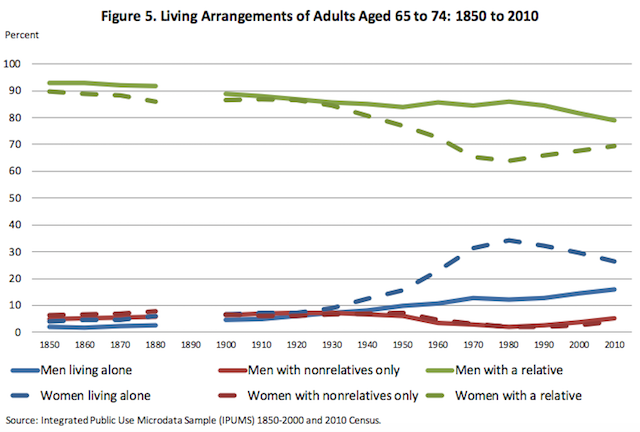 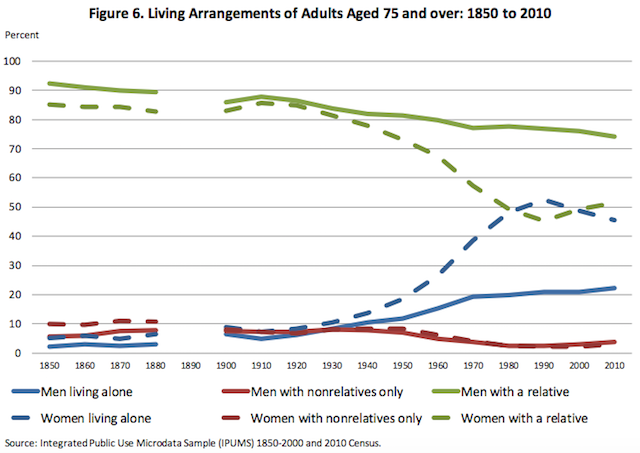 Kreider and Vespa attribute the growing and then shrinking gender gap in older Americans' living arrangements to a divergence and then modest convergence in men's and women's life expectancies. Women live longer than men, and thus are more apt to live out their last years as widows than men are to die as widowers. Older Americans' increasing likelihood of living alone, meanwhile, is probably related to the introduction of the Social Security system, which meant fewer elderly people had to move in with younger relatives.

The increasing popularity of living alone among young and old alike is also tied to a growing economy and increasing standard of living—both happy trends. The trend as a whole is not unambiguously positive, however: Living alone and the related phenomena of loneliness and social isolation are associated with an increased risk of mortality. Indeed, several researchers have found in recent years that they can pose as much of a threat to health as smoking and obesity. Scholars commonly study those risk factors, and resources for quitting tobacco and controlling one's weight abound. Isolation and loneliness, on the other hand, are seldom mentioned by health professionals, and few know that they take a physical as well as a psychological toll on those who experience them. Jessica Olien at Slate and Alan Jacobs at The American Conservative have argued that loneliness is not just rarely discussed but actually stigmatized today. You can tell people you're trying to stay on a diet or quit smoking, whereas most of us would hesitate to volunteer that we're feeling lonely, whether to a doctor or a friend.

I'll close with some predictable disclaimers. First, not all people who live alone, possibly not even a majority, are lonely or socially isolated. I'm sure many solo-dwellers have more varied and more fulfilling social lives than people with spouses and kids to look after. Furthermore, like my colleague Ashley McGuire has written, it's quite possible to feel isolated as a happily married mom in a big city. Loneliness, social isolation, and living alone are three separate social indicators to researchers in the field, despite their conceptual connections. But as people in the U.S. and other economically advanced nations spend an increasing proportion of their lifespan living alone, the topic of loneliness should not be taboo.