A recent poll by Pew Research Center shows that the U.S. Christian population has been declining steadily in the past decade. Today, 63% of Americans describe themselves as Christians, down from 75% just a decade ago. The share of Americans who identify with non-Christian faiths (6%) holds steady, but the share of secular Americans is up by 10 percentage point from a decade ago.

In times of crisis, such as the COVID-19 pandemic, one might expect that more people would turn to religion, given the death, fear, and isolation the pandemic has generated. In fact, polling data at the onset of the pandemic suggested that Americans were much more likely to say that the COVID-19 crisis had strengthened their faith instead of weakened it. Yet the initial reaction to the crisis may not last, and some people could be deterred from physically returning to church because of the prolonged pandemic.

According to data collected in April/May 2020 by Barna Group, one-in-three practicing Christians dropped out of church completely during COVID-19. Last June, the AP broke a story about many houses of worship in the U.S. that were shuttered forever due to the pandemic . What’s worse, church membership in the U.S. dropped below 50% for the first time in 2020, according to Gallup data dating back to 1940.

A new IFS analysis using the American Family Survey suggests that religious attendance has declined significantly in the past two years. The share of regular churchgoers is down by 6 percentage points, from 34% in 2019 to 28% in 2021.1 Meanwhile, the share of secular Americans who have never or seldom attended religious services increased by 7 percentage points. 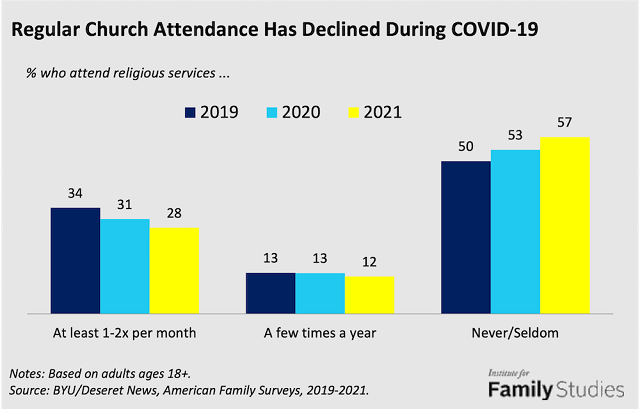 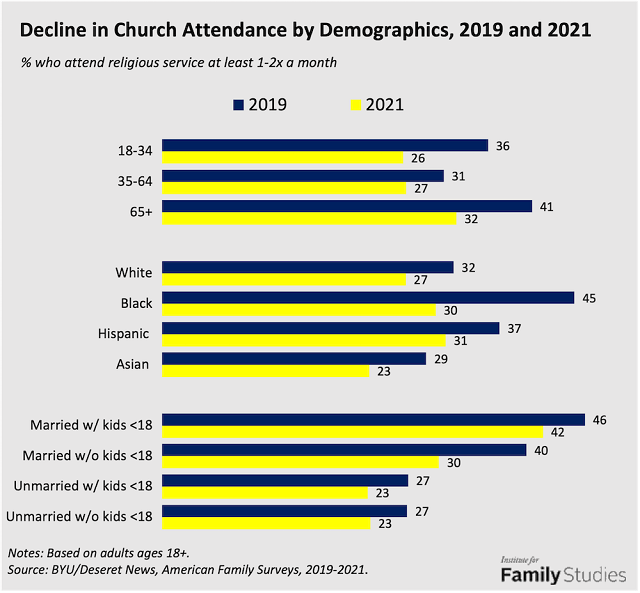 The decline in church attendance is also more pronounced among married adults without children under age 18. Some 30% of married adults without young children attended religious services regularly in 2021, down from 40% in 2019. This is perhaps related to age, given that this group of adults is the oldest of four groups categorized by marital status and having children under age 18 (the median age was 61).

As more COVID-19 vaccines and treatments become available, the burning question is whether we will see a rebound in church attendance after the pandemic finally passes. It is hard to predict, but the previous research on how the Great Recession of 2007 to 2009 affects religious attendance may shed some light. At the time, many people believed that the economic crisis would lead to higher levels of church attendance. However, data shows that there was no increase in religious service attendance in the U.S. since the Great Recession. Moreover, research also shows the financial crisis in 2008 did not have any clear impact on the levels of religious attendance in European countries, either.

It is possible that some empty pews may be replaced by online worshippers, but there is no available data to support this. Moreover, a lack of in-person interaction could weaken the social bonds within churches as the pandemic prolongs. As we know, religious service attendance is not only linked to having a social support network, but also to public health benefits, such as less depression, lower suicide rates, and less drug and alcohol overdoses. Online services, with people isolated at home, are unlikely to offer the same level of benefits.

There are also emotional costs for people who practice religion but no longer attend religious services. According to the Barna survey, respondents who stopped attending church during COVID-19 were more likely to feel insecure and anxious, compared with practicing Christians who didn’t stop attending services in person.

As Tyler Vanderweele and Brendan Case recently pointed out in Christianity Today, “empty pews are an American public health crisis.” Moreover, Americans who attend religious services frequently are more likely to be married and have children. Coming out of the COVID-19 pandemic, religious Americans are also more likely than non-religious Americans to have a stronger desire for marriage and children. A decline in religious service attendance not only has the potential to negatively affect public health, but also family stability and population growth in America.

1. The terms “church,” “religious services,” and “house of worship” are used interchangeably.