The Crime of Nations: The Underappreciated Role of Family Factors

Why do some countries have so much crime? Here in the U.S., we often worry about the fact that our murder rate is so much higher than those of other developed countries. Even more disturbing are crime rates in much of the developing world.

Figuring out what causes crime could be the key to reducing it, so this is more than an academic question. But it has still proven tricky to answer. Some blame culture; others blame poverty or inequality; still others blame a lack of good government. A new study looks at the question through a different lens: Maybe crime is one manifestation of a “fast life-history strategy”—a bundle of traits, unified by a wide-ranging evolutionary theory, that also includes adolescent fertility and low paternal investment. The results suggest that, indeed, nations with young mothers and absent fathers also tend to have high crime, even after other potential causes have been accounted for.

Here’s the thinking behind the life-history theory. Over the course of its life, every organism faces a series of questions about how to convert its resources into offspring. Will it focus on reproducing now, or on improving its chances for the future? Will it have many children and invest little in each one, or have a few children and invest more?

The tradeoffs are numerous, and each can affect the others. To quote one review of the theory, “age at sexual maturity, gestation period, birth weight, litter size, postnatal growth rates, breastfeeding duration, birth spacing, length of juvenile dependence (provisioning), level of parental investment per child, adult body size, and longevity are all [life history] traits.” But the two ends of the continuum boil down to “slow” and “fast” strategies—the former more deliberate, the latter more reckless.

The fast strategy tends to appear amid high mortality and unpredictable environments. When the future is uncertain, it makes sense to live fast and take risks in the hope of an immediate payoff, so species evolve in that direction. Evolution can also equip individuals with the ability to adapt to their own circumstances, deploying fast or slow strategies depending on the cues they receive from their environment. This means that the details of someone’s childhood, such as whether his father was present, might program him to evaluate these questions in a certain way.

Relative to the rest of the animal kingdom, humans fall toward the slow end of the spectrum, with, for example, an extended period of dependency in childhood that requires high parental investment. But human individuals and populations differ in many key life-history traits. This raises the possibility that crime, a reckless endeavor if ever there was one, is one expression of a fast strategy—and that addressing the fast strategy as a whole might be one way to reduce crime.

Is this explanation of crime any better than other, more typical ones? In search of an answer, the new study’s authors, Michael Minkov and Kevin Beaver, evaluate past research on likely causes of crime, assemble international data on those causes, and try to figure out how life-history strategies fit into the puzzle.

Unfortunately, their assessment of past research is cursory. They do round up the usual suspects, such as inequality and poverty, but they neglect important possibilities. Perhaps the most egregious omission is government institutions, which have been identified in several important works—Why Nations Fail, The Better Angels of Our Nature—as key to a well-functioning, safe society.

The closest the authors come is a one-paragraph look at “police performance” that criticizes a single study. That study used a measure of perceptions of police performance, which the authors say could basically just be a measure of crime itself. But instead of dropping the matter, the authors might have looked to various other measures—arrest/clearance rates, governance and corruption indexes, etc.—and research showing that they correlate with rates of crime and violence.

At any rate, Minkov and Beaver settle on nine variables to investigate. Crime is measured two ways: an index combining mugging, assault, and homicide rates (the first two measured through an international survey), and murder rates by themselves. Four potential causes of crime are drawn from previous studies: GDP, inequality, infant mortality (a proxy for poverty), and average IQ. And three more potential causes are indicators of life-history strategy: father absence, adolescent fertility, and “pathogen stress” (a measure of parasites and diseases in the environment).

The first important result is that, with no control variables included, everything correlates with everything else—almost always in the direction of bad things going together. Scores on the crime index, for instance, are higher in nations with low GDP, high inequality, high infant mortality, low average IQ, high adolescent fertility, high father absence, and high pathogen stress.

It’s worth noting that the strongest correlation is between crime and paternal presence, which I was able to chart because the authors kindly provided me their dataset: 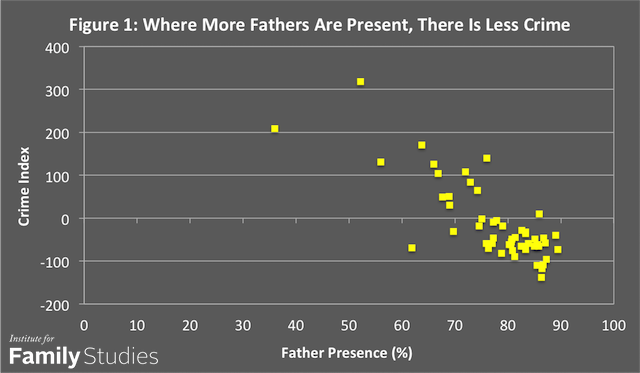 Other risk factors like inequality, however, aren’t too far behind: 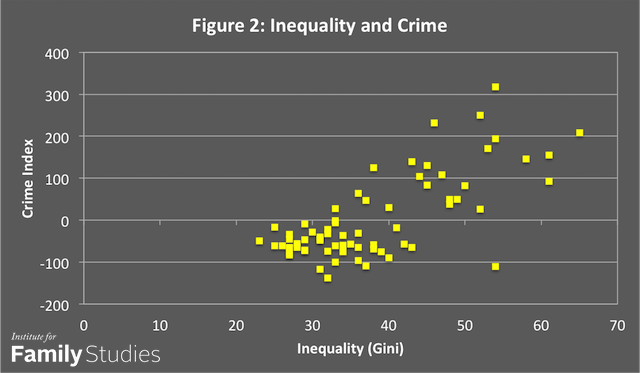 Minkov and Beaver then turn to the statistical technique of regression analysis to suss out what’s really important. Experimenting with various models, they find that two of the life-history variables—father absence and adolescent fertility—are the best predictors of the crime index. When murder rates alone are used as the outcome variable instead, inequality is also strong.

Here are the full results for the two models they emphasize most: 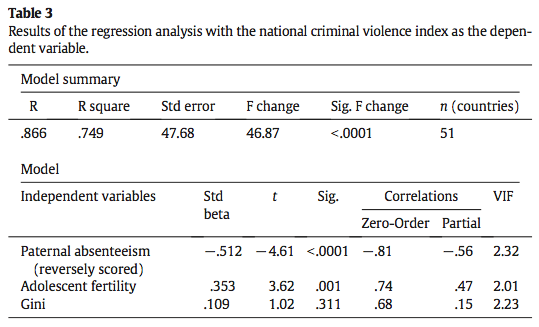 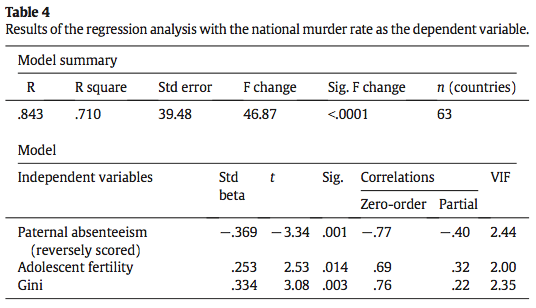 These results are certainly consistent with the theory that crime is part of a fast life-history strategy. And even outside that context, it suggests that policymakers should take father absence and adolescent fertility seriously as possible drivers of crime. However, as is typical with social science, there are a few reasons to interpret the results with care.

First, as the authors concede, these results don’t rule out the possibility of complicated, even chaotic, causal pathways. Despite faring poorly in the model, poverty and pathogen stress might cause crime indirectly, possibly by encouraging the adoption of a fast strategy. And fast strategies might partly be a result of high crime rates, not just a cause of them. And so on.

Second, international data are always suspect. Virtually any effort to measure a single variable in many different countries—especially by combining data from multiple sources and years—will be less than perfectly accurate. Measurement error can pose serious problems, especially if some variables are measured less accurately than others and then left to fend for themselves in a model.

And third—to flesh out a point made above—government institutions are not included in the analysis. To investigate this possibility, I matched Minkov and Beaver’s crime index with the U.N.’s Worldwide Governance Indicators. Specifically, I averaged four of the U.N.’s six indicators, each of which is measured on a scale ranging from -2.5 to 2.5: “government effectiveness,” “voice and accountability,” “regulatory quality,” and “control of corruption.”1 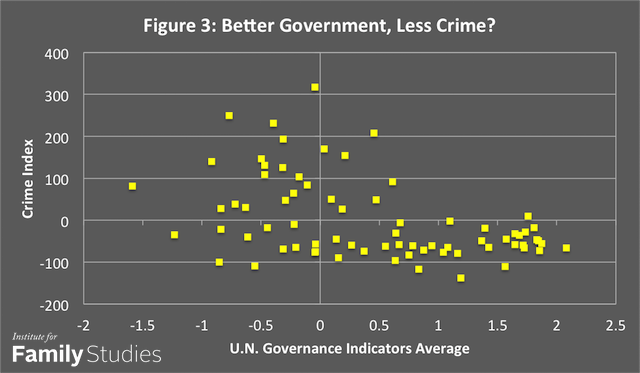 Of course, this variable is just as problematic as all the others. (For example: Does good governance reduce crime, or do both low crime and good institutions stem from other causes?) But the moderate correlation (-0.45, statistically significant and on par with the figures the authors report for GDP and pathogen stress) suggests that it, or something like it, should have been included in the study.

Nonetheless, when I tried adding the governance variable to a model alongside adolescent fertility and father absence, and used these variables to predict the authors’ crime index, the result for governance came nowhere near statistical significance, while both the life-history variables were still significant at the 0.1 percent level. So if performance in a regression model is the appropriate yardstick, the life-history variables handily beat out even government.

Any reservations aside, Minkov and Beaver provide a new way of looking at crime, and a new way of conceptualizing the connection between family structure and problematic child outcomes. The paper buttresses the argument for stable marriages and delayed childbearing, and it suggests that policymakers should familiarize themselves with the details of life-history strategies so that they might think about how to change them.

Editor's note: Figure 2 has been updated since this post was published to fix an error.

1. I excluded “political stability and absence of violence” and “rule of law” because they seemed especially likely to be effects, rather than causes, of crime rates, and I used the scores from 2007, roughly the middle of the period the authors’ index comes from. The mugging and assault surveys were conducted in 2000-2005; the murder rates are the most recent year available from 2012-2014.