Testing a Relationship Is Probably the Worst Reason to Cohabit

“Majority of Americans Now Believe in Cohabitation.” That’s the headline and conclusion from a national survey conducted by the Barna Group.1 They surveyed 1,097 adults in April 2016, finding that 65 percent of Americans now approve of cohabiting prior to tying the knot, while 35 percent do not.2 Given that nearly 70 percent of Americans marrying today will cohabit before getting married,3 these findings are not too surprising.

The Barna Group also found that 84 percent of those who support premarital cohabitation do so because it provides a test of compatibility prior to marrying. That will be our main focus in this piece, but first, here are some other findings from the report:

The survey also asked about behavior, finding that 57 percent of those surveyed had cohabited with a partner outside of marriage at some point. Further, and entirely consistent with what we might expect, older, more conservative, and more traditionally religious respondents were the least likely to report a history of cohabiting compared to the rest of the sample.

The embrace of cohabitation before marriage is sweeping. As Roxanne Stone, editor-in-chief for the Barna Group, explained, “Even a growing number of parents—nearly half of Gen-Xers and Boomers, and more than half of Millennials—want and expect their children to live with a significant other before getting married.”

Cohabitation is here in a big way.

Why People Believe Cohabiting is a Good Idea

The Barna Group found that 84 percent of those who approve of cohabiting before marriage said that it was valuable for testing compatibility. This has been the dominant belief of young adults for 20 years or more. By way of comparison, in a detailed report on attitudes related to family in 2001, sociologists Arland Thornton and Linda Young-DeMarco4 (citing findings from the Monitoring the Future project at the University of Michigan) noted that, by the late 1990s, more than three-fifths of high school students in the U.S. endorsed this sentiment: “It is usually a good idea for a couple to live together before getting married in order to find out whether they really get along.’’ Simply put, most young people believe this.

Furthermore, the Barna Group found that other reasons for valuing premarital cohabitation paled in comparison to testing, with the reason that “it’s convenient/practical” coming in at 9 percent and “cheap rent” coming in at 5 percent (2 percent chose “other).

Reasons Cohabiters Give for (Actually) Moving In Together

From 2007 to 2012, we followed a national sample of 1,294 unmarried young adults (ages 18 to 34) who were in serious romantic relationships, surveying them about their personal lives and relationships for 11 waves.5 This is the Relationship Development Study (RDS), and the sample well represents Americans in that age range.

At the first time point in this longitudinal study, we asked people if they were cohabiting and, if so, their reasons for doing so. Based on prior work in this area,6 we gave people six options for ranking their reasons for moving in with their partners7 (displayed in the accompanying chart). Although the Barna Group showed that most people who endorse cohabiting before marriage believe it is a good idea because it provides a good test of compatibility, that’s not the most common reason people give for actually moving in together. 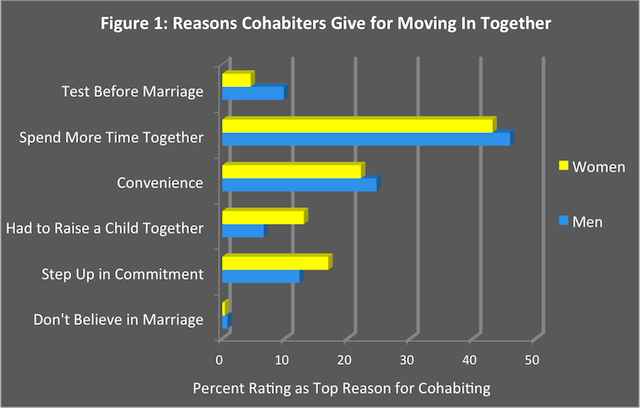 As you can see from Figure 1, we found that the number one reason both males and females gave for moving in together was to spend more time with their partners. Convenience was the second most strongly-endorsed reason, followed by wanting to take a step-up in commitment.8 Convenience would include the types of financial benefits noted in the Barna Group report. In our sample, men and women strongly diverged in two categories. Women were more likely than men to say they cohabited because they had a child to raise (13 percent vs. 6.6 percent), whereas men were more likely than women to say they cohabited to test the relationship (10 percent vs. 4.5 percent).

Is Cohabiting a Good Test of a Relationship?

We (particularly Galena) began carefully studying reasons people have for cohabiting around 2005 as part of a range of efforts to study cohabitation and why it was not typically associated with the improved outcomes in marriage that most people expect. Using an earlier sample of cohabiters (not the national and more representative sample we have in the RDS), we gathered in-depth quantitative data from 120 couples, and we looked at reasons people gave for cohabiting and at factors associated with those reasons.9

In that data set, the top three reasons people gave for cohabiting were to spend more time together (61 percent), financial convenience (19 percent), and to test the relationship (14 percent). These findings parallel those we obtained in the same sample of that report using a more sophisticated scale of reasons for cohabitation that we used in more complex analyses of what is associated with various reasons people hold for cohabiting.

Women who reported cohabiting for reasons of convenience were more likely to report lower levels of confidence in their relationships, less commitment, and higher levels of negative dynamics with their partners. Those findings are consistent with the fact that, for some, cohabitation is sometimes driven by perceived and real necessities. Some people really do have poorer options, and they are more likely to end up in difficult relationships where cohabitation probably would not otherwise have been their first choice, at least with “this” partner.

What about testing? As with our national data set, men were more likely than their partners (all women) to report cohabiting in order to test the relationship. We examined the personal and relationship characteristics of both men and women who reported testing, and found that:

We think of these findings this way. If you are considering whether or not to move in with someone to test the relationship, it’s likely not the wisest thing to do. In fact, it seems to us that many people who are thinking about testing their relationship by cohabiting already know, on some level, what the grade of that test may be; but they are hoping that the answer looks better over time.

If you are considering whether or not to move in with someone to test the relationship, it’s likely not the wisest thing to do.

Even cohabiting to spend more time together may not be without risk. We’ve argued elsewhere and often—with a lot of empirical evidence in many published studies—that the number one thing people miss about the risk of cohabiting is that it makes it harder to break up. Cohabiting relationships break up all the time, and increasingly so,10 but the relative difference is the point. All other things being the same, a couple who is cohabiting will have a harder time breaking up than a couple who is only dating. We think that’s a big deal.

If you want to read more about this issue, what we call “the inertia of cohabitation,” you can read more here and here and here. Or, see our 4-minute video on the subject: Relationship DUI.

What’s the point? Simple, actually. Because many people cohabit before even having mutual clarity about commitment, such as through engagement or marriage, some people end up staying in relationships, including on into marriage, that they otherwise would have left behind.11 Essentially, many people slide into situations that make it harder to end a relationship before they have made a clear decision about what is best. The situation looks quite a bit different for those who have strongly clarified mutual commitment to the future before moving in together, such as by being engaged or even—gasp—being married.

There are many better ways to test a relationship than to do something that makes it harder to break up before you’ve really figured it all out. Take a relationship education course (i.e., some kind of premarital preparation before you even get engaged), talk about what a future together would look like, and see if you are compatible by dating. Take the time to see your partner in a lot of different social settings.

Ever take any college classes? If so, you know that people sometimes sign up for a class and then decide, part way in, that it’s not for them and they drop the class. But some people figure it out too late and cannot drop the class or, at best, drop it late and lose their money.

It’s easy to slide into cohabitation without even a serious discussion or decision and then get stuck. When it comes to moving in together before marriage, some people may find that they are failing in a class that has become too hard to drop.

1. The Barna Group specializes in survey work that is often used by those in religious ministry. As for the methods used by the Barna Group, they seem reasonable to us, and the findings are entirely consistent with what we know in this field. However, we have not examined the specific procedures beyond what is stated in their report, where they note: “The study on which these findings are based was conducted via an online survey from April 7 to April 14, 2016. A total of 1,097 interviews were conducted. The sample error is plus or minus 2.8 percentage points at a 95 percent confidence level. The completion rate was 85%.”

6. We also gave people the option of saying they moved in together because they did not believe in marriage, which was endorsed by less than 1 percent of the respondents.

7. These particular findings from our national sample have not, as yet, been published.

8. This was actually listed as “inconvenient to live apart” in the survey